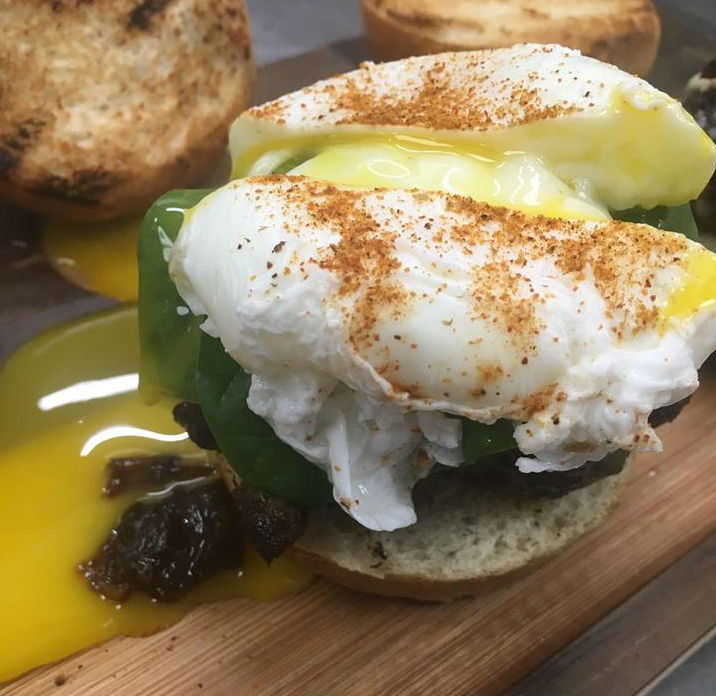 A dish at The Felix Cafe in Monkey Junction. The restaurant took over the spot formerly occupied by Giorgio's Italian Restaurant. (Photo courtesy of The Felix Cafe)

With 2018 having come to a close, it's time to look back on our most widely read Restaurant Roundup stories of the past year:

10. The countdown begins at the 10th-most widely read story, Passing the glass: Downtown wine bar gets new owner. In June, Celeste Glass, founder of The Fortunate Glass, announced that she would be selling the wine bar to Tom Noonan, as she pursued the opening of The Second Glass in the South Front District.

9. Cape Fear Seafood Company plans to expand to the Raleigh market. In early December, CFSC owner Evans Trawick announced that the company will open its first franchise location in Raleigh this spring. Expansion into the Raleigh area will be led by franchisees Eddie Elliott and Matt Wivell, both current CFSC employees. The company also announced plans for the opening of two additional Raleigh-area restaurants within the next 36 months.

8. The announcement of the closure of Osteria Cicchetti in Monkey Junction. At the time the story ran in September, Danny and Earl McPherson, owners of King Neptune's restaurant in Wrightsville Beach, were expected to buy the business from Circa Restaurant Group owner Ash Aziz. But the sale did not go through, and Aziz reopened the restaurant as a new concept, Junction 421, an American bar and grill, in mid-December.

7. The countdown continues with the news that TAILS Piano Bar would replace Aubriana's at 115 S. Front St., offering live music and craft cocktails. TAILS owner Gregg Thomas opened the venue in March, bringing both local and national acts to the venue, which is outfitted with a 1924 Sohmer baby grand piano.

6. Next on the list is Bitty & Beau's Coffee's planned expansion to a third location, this one in Savannah. After opening a Charleston, South Carolina, store in February, plans for the third location followed last May. “Savannah has the same Southern charm as Wilmington and Charleston, and we think it will be a great fit for us,” said co-founder Amy Wright. “One of the reasons we selected Charleston for our second location was the ability to reach tourists who had not yet heard about our mission, and we believe we’ll have the same impact in Savannah.”

5. The demolition of the former Macaroni Grill property at Mayfaire Town Center last April came in next. Macaroni Grill vacated the building in 2015, and at the time of demolition, representatives from Mayfaire said the space would be used to make room for potential new businesses.

4. The fourth-biggest restaurant story of 2018 came in early January with the announcement that Wilmington-based USA InvestCo LLC had dissolved its partnership with Charlotte-based BlackFinn Ameripub. As part of the change, the restaurant at the Port City Marina would close and be replaced by a new concept, Marina Grill, which opened in March. In addition to BlackFinn’s closure, it was announced that Vida Mexican Kitchen y Cantina, which was slated to open next door to BlackFinn, would not be opening.

3. Rounding out the top three was the news that The Felix Cafe would open a restaurant in the former Georgio’s Italian Restaurant space in Monkey Junction. Owners Felix Scroppo and Jeffery McDowell said they had been scouting potential second locations for a while, feeling that their Burnett Boulevard space was both a bit too small and in need of some repairs. The Felix Cafe opened at 5226 S. College Road in late April.

2. Coming in second was the announcement that the Charlotte-based barbecue chain Mac’s Speed Shop would be coming to Wilmington. Mac’s five founding partners opened the first Charlotte location in 2005, specializing in both traditional Carolina barbecue with its standard sides, as well as ‘Mexicue,’ a unique blend of barbecue and Mexican flavors.

1. And topping the chart for the most-widely read Restaurant Roundup story of 2018: the news that Wilmington would have its very own cookie dough eatery, Doh Cones. The announcement came last April that owners Tammy and Jason Graf would be brining 25 flavors of edible, raw cookie dough to Mayfaire Town Center. After being open just a short time, the shop was forced to close for six weeks following Hurricane Florence. Now the building at 820 Town Center Drive is under construction once again, and the Grafs made the decision to close the doors to the public Dec. 26 out of concern for the safety of their customers and employees. Orders for private events can still be made, and the Grafs said they hope to reopen as soon as possible.

“These construction issues have been a real setback for us, but we will use this time to experiment with new flavors and hopefully have some exciting new items to offer upon reopening,” Tammy Graf said.