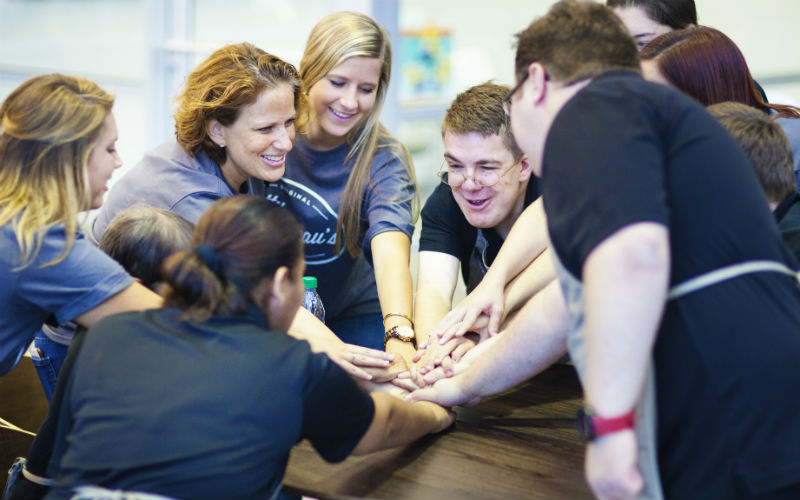 Co-founder Amy Wright celebrates with Bitty & Beau's employees (Photo courtesy of Bitty & Beau's Coffee)
Bitty & Beau’s Coffee, founded in 2016, has announced that Savannah, Georgia, will be the site of the company’s third location.

“Savannah has the same southern charm as Wilmington and Charleston and we think it will be a great fit for us,” said co-founder Amy Wright. “One of the reasons we selected Charleston for our second location was the ability to reach tourists who had not yet heard about our mission, and we believe we’ll have the same impact in Savannah.”

Wright said she and husband Ben finalized the details for the lease for 319 W. Congress St. last week, and are pleased to be in the heart of historic downtown, right next to landmark restaurant Garibaldi Café. The 1,500-square-foot space will be designed by LS3P, the same architectural firm that designed the Charleston, South Carolina location, and a September opening is expected.

Wright anticipates hiring approximately 20 employees with disabilities, along with a small support staff. And plans are already in motion for future locations. The Wrights say they plan to open a total of ten locations across the U.S. in the coming years.

“There is a need for this everywhere and we are already thinking about where we’ll be going next,” Amy Wright said.

Just last week Wright, along with Bitty & Beau’s employees, launched a new social media campaign, titled #notbroken. Wright said the campaign’s mission is to help show the world that people with disabilities are not broken. She said the response so far has been overwhelming; they have already sold out of many sizes of T-shirts and people have been posting hundreds of photos to Facebook and Instagram with the hashtag notbroken.

Wright, recipient of the CNN Hero of the Year Award for 2017, said in her acceptance speech, “My children are not broken. My employees are not broken. 200 million people across the world living with an intellectual or developmental disability are not broken. What is broken is the lens through which we view people with disabilities. Bitty & Beau’s Coffee is a new lens, one that changes the way that people see other people.”

The original Bitty & Beau’s coffee is located at 4949 New Centre Dr. in Wilmington. The Charleston coffee shop is at 159 Church St.