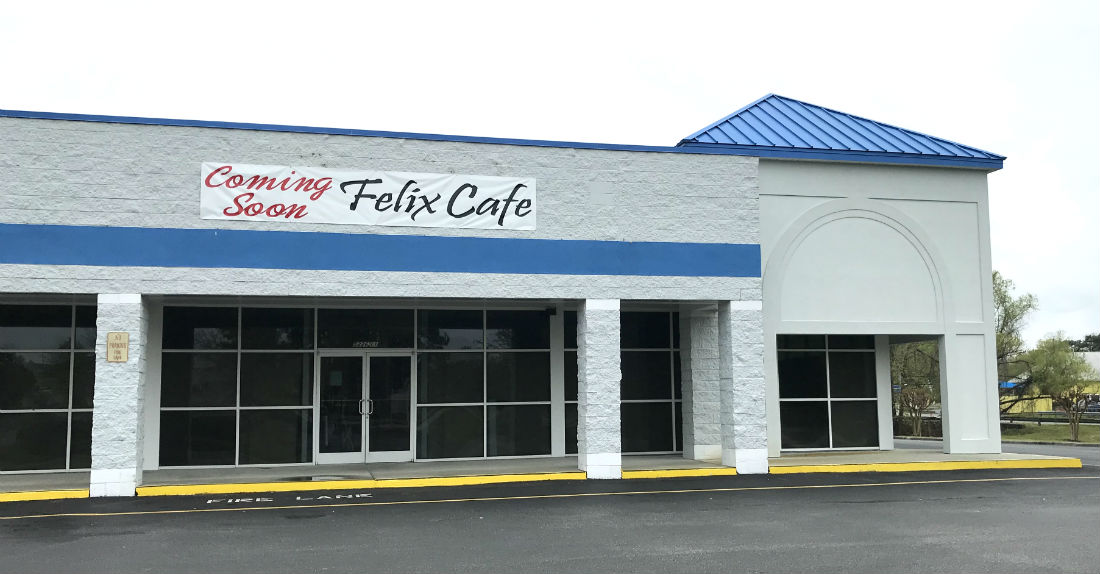 Felix Cafe is expected to open soon in the space formerly occupied by Giorgio's Italian Restaurant in Monkey Junction. (Photo by Cece Nunn)
The owners of Felix Cafe, Felix Scroppo and Jeffery McDowell, are putting the finishing touches on the cafe’s new location in Monkey Junction.

The new location of Felix Cafe is scheduled to open in the next several weeks in the space that formerly housed Giorgio’s Italian Restaurant in a shopping center at 5226 S. College Road.

Scroppo and McDowell opened their restaurant’s current location at 2140 Burnett Blvd. in late 2015, and have gained a loyal following. Scroppo said he had been scouting potential second locations for a while, feeling that the Burnett Boulevard space was both a bit too small and in need of some repairs.

The 5,000-square-foot former Giorgio's space has been remodeled and upfitted with new kitchen equipment. Scroppo said the decor and menu will be very similar to the island theme at his current location. He has installed a 300-gallon saltwater fish tank, and the walls are painted in tropical colors and adorned with mermaids.

Scroppo said it was difficult to accommodate larger parties at the Burnett Boulevard location and he is happy to have in the new space several large tables, including a 22-seat community table, where he will host regular meet-and-greets, as well as a private party room for up to 120 guests.

“Wilmington is growing at such a rate that there are always new people here who don’t know anyone,” Scroppo said. “The meet-and-greets are something that I don’t really see happening anywhere else in town and I look forward to that.”

The new Felix Cafe will not only be able to accommodate larger parties, but also to offer more parking and some new menu items as well, which Scroppo said will be revealed in the coming weeks.

Scroppo plans to temporarily close the Burnett Boulevard location once the new restaurant opens in order to assess the costs of the renovations he has in mind, and focus on getting the new location up and running.

“The intent has always been that if we were to remodel and reopen the Burnett location that it would serve lunch only,” Scroppo said. “For now we want to focus on a fresh start in our new location.”

For more information on the opening date and upcoming events, such as live music and meet-and-greets, visit Felix Cafe's Facebook page.