One of the hallmarks of the Cameron School of Business is our unique ability to bridge academic rigor with real-world practice. This endeavor is easy given that our proximity to the Atlantic Ocean draws businesses and retired senior corporate executives to our area. The Cameron Executive Network (CEN) draws on this wealth of talent to provide countless hours of one-on-one mentoring for our students. The CSB also uses this pool of talent in our Executive-in-Residence (EIR) program. EIRs are full-time lecturers in the Cameron School, and this week’s blog is written by EIR Tom Simpson who worked for 30 years at the Federal Reserve’s Board of Governors (and has given the dean a break from the demands of the blogosphere).

Believe it or not, the current economic expansion began more than five years ago. In mid 2009, we began to emerge from the worst recession in postwar history. The Great Recession was triggered by the financial crisis that had comparable dimensions to the one that caused the Great Depression of the 1930s.

Typically, deep recessions are followed by brisk recoveries. This expansion, in contrast, features an average annual growth of a paltry 2 percent, roughly half that of others, even as monetary policy has been the most accommodative in U.S. history. Moreover, at five years, this expansion has outlived nearly two thirds of other postwar expansions. Are we in for more of the same? More worrisome, do we have reasons to fear an oncoming recession?

Trauma from the financial crisis and the deep recession led to unusual caution on the part of household and business spenders and on the part of suppliers of credit. Much of that caution should have abated by now.

In the household sector, the personal saving rate, shown below, can be thought of as a barometer of consumer caution.  Saving jumped during the Great Recession (shaded area on the right) as households retrenched, in keeping with soaring uncertainty about impending budget strains. Even though the saving rate has moved lower, it has stayed high relative to historical levels. Similarly, surveys of consumer sentiment have yet to break out of recession-level ranges. At this point, with ongoing gains in employment over the past year along with a lofty stock market and rising home prices padding household wealth, consumer spending should be showing more vigor. 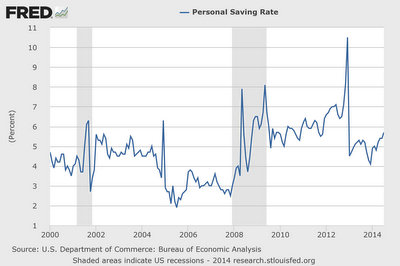 Businesses also hunkered down at the onset of the recession by slashing payrolls and investment outlays. Cash flow took a considerable hit and credit supplies dried up. Since that time, corporate cash flow has risen appreciably above its previous peak and has stabilized at this high level, shown below. This would suggest a restoration of attractive returns on new investments. Moreover, corporations have built up mountains of liquid assets and credit has become widely available for corporations with access to the bond market, especially issuers of junk bonds. These conditions, coupled with very low interest rates, should induce large amounts of investment. 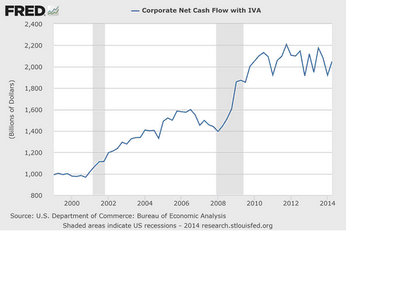 On the other hand, investment as a share of GDP remains below previous norms. Being subpar even before the Great Recession, the investment share of GDP collapsed during the downturn and has yet to fully recover. Business leaders routinely attribute their caution to adverse public policy – a stiffer regulatory climate, an uncertain outlook for health care costs, and an out-of-control federal budget. 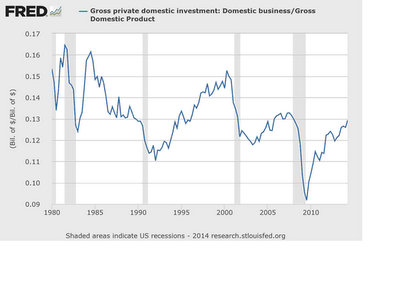 Meanwhile, commercial banks and other lenders entered the recession fearing survival. They cut back sharply on their lending and tightened underwriting standards and terms. However, over recent years these lenders have fortified their balance sheets, returning to health, and should be in a good position to lend. However, they have continued to be reluctant suppliers of credit. This is illustrated in the chart below showing the spread of the average interest rate on business loans made under commitment over the federal funds rate. 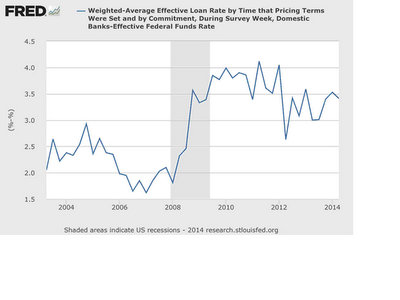 This spread rose markedly during the recession, and has since narrowed only a bit even as the condition of banks has improved considerably. Bankers point to greater regulatory costs as the main reason for their stringency. It seems unlikely that this situation will be unwound much in the years ahead.

Putting this all together, we can expect that growth in aggregate demand will strengthen some in coming quarters, paced by a pick up in growth of both consumer and business spending. To an important extent, this will entail pent-up needs for replacements. The average age of motor vehicles has hit a new high recently and with few restraints on consumers, we can expect motor vehicle and other big-ticket consumer purchases to rise. Much the same can be said for businesses, which still face sizable replacement needs for capital goods and software. Meanwhile, the government and external sectors should be exerting a neutral force on aggregate demand.

Growth, while picking up, is unlikely to surpass a 3 percent annual pace. This is only about 1 percentage point above the economy’s capacity to grow. In these circumstances, slack in the labor market and elsewhere will diminish only slowly. With sizable slack remaining, inflation, shown below, should continue running below the Fed’s target of 2 percent. 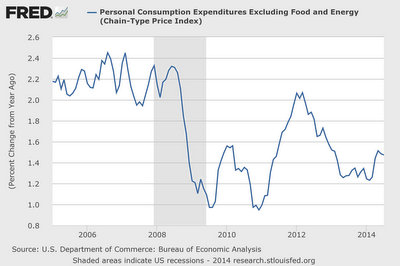 Under these conditions, the Fed will be slow to begin a normalization (tightening) of monetary policy after its large-scale asset purchases end in October.

Forget the Diet, Bring on the Wealth

Creating Our Very Own Supply Chain of Specialists

What’s on the Economic Horizon for 2023?

Going Beyond the Resumé

Keep on the Lookout: Cameron School of Business Star Graduates Enter the Workforce