This Insights was contributed by Dr. Thomas Simpson, Ph.D., Executive in Residence for the Department of Economics and Finance at UNC-Wilmington. The piece is based on research found in the recently published Economic Barometer. Economic Barometer is a quarterly snapshot of local, regional and national economic trends produced by the UNCW Swain Center economic and financial team.

Yields on benchmark Treasury securities have been plumbing historic lows but the outlook for the federal budget deficit, and associated Treasury borrowing pressure, keeps worsening.

The chart below shows the yield on the 30-year Treasury bond, which has been bouncing around 2.25 percent of late, something unthinkable just a decade ago. 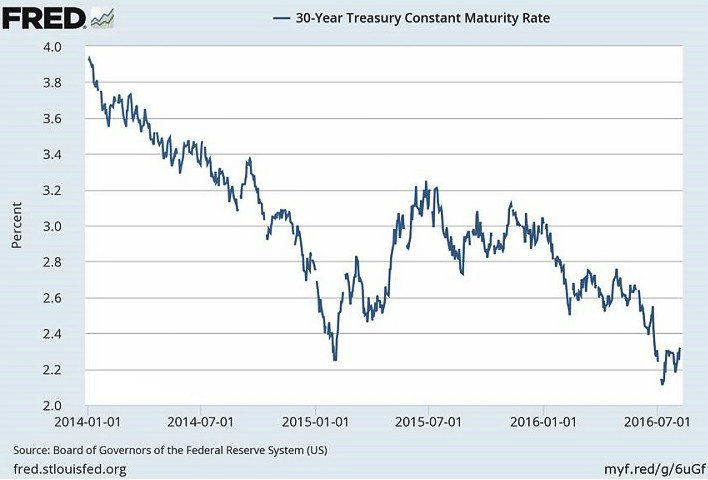 Meanwhile, the nonpartisan Congressional Budget Office (CBO) has updated its long-term budget outlook  based on spending and taxation embodied in current law. That forecast envisions even larger fiscal deficits as far as the eye can see, resulting in an ever-rising claim of deficits on the economy (GDP). This owes primarily to health care and social security entitlements that balloon with an aging population.

Moreover, the CBO projections do not include election-year promises to boost infrastructure spending, sweeten social security benefits and expand subsidies for higher education. Even without these election-year add-ons, CBO projects that marketable federal debt will rise in relation to GDP from the current 75 percent - already unprecedented for a peacetime U.S. economy - to 144 percent over the next 30 years.
This is comparable to Greece a few years ago, when it faced a catastrophic debt crisis that continues to depress its economy.

Clearly, the fiscal trajectory is unsustainable and places the United States in a position in which it could be forced to default for the first time in our history - an anathema to our founding fathers. In these circumstances, why are investors so complacent and long-term yields so low - that is, why aren’t investors insisting on compensation in the form of higher yields for the risky outlook? Either investors are fairly confident elected officials will confront the runaway fiscal situation, bringing the budget under control and avoiding default, or they are focusing only on the near-term, ignoring prospects for a fiscal collapse later on.

To be sure, some exceptional forces are currently holding down Treasury interest rates. First, inflation has been running very low, and expectations of inflation appear to have drifted lower. Second, the persistently anemic economic expansion of recent years seems to be suggesting that the new normal for the benchmark interest rate - the so-called natural rate of interest - has fallen appreciably in relation to historical norms. Finally, turmoil in global financial markets, most recently ignited by the June 23 Brexit vote, has swollen demand for Treasury debt, as treasuries continue to be regarded as safe havens.

At some point down the road, the tension between soaring Treasury borrowing requirements and investor complacency will need to get resolved. The preferable resolution would come from elected leaders setting aside political expediency and bringing the budget into alignment with our ability to service our obligations. Absent this, market turbulence will be the outcome, either forcing wrenching budgetary actions or - perish the thought - default.

To learn more about the current regional and national economic projections, you are invited to attend Swain Center’s annual Outlook Conference, the region's premier forum for economic activity and forecasts. Click here for details and event registration.

Robert T. Burrus, Jr., Ph.D., is the dean of the Cameron School of Business at the University of North Carolina Wilmington, named in June 2015. Burrus joined the UNCW faculty in 1998. Prior to his current position, Burrus was interim dean, associate dean of undergraduate studies and the chair of the department of economics and finance. Burrus earned a Ph.D. and a master’s degree in economics from the University of Virginia and a bachelor’s degree in mathematical economics from Wake Forest University. The Cameron School of Business has approximately 60 full-time faculty members and 20 administrative and staff members. The AACSB-accredited business school currently enrolls approximately 2,000 undergraduate students in three degree programs and 200 graduate students in four degree programs. The school also houses the prestigious Cameron Executive Network, a group of more than 200 retired and practicing executives that provide one-on-one mentoring for Cameron students. To learn more about the Cameron School of Business, please visit http://csb.uncw.edu/. Questions and comments can be sent to [email protected].

Forget the Diet, Bring on the Wealth

Creating Our Very Own Supply Chain of Specialists

What’s on the Economic Horizon for 2023?

Going Beyond the Resumé

Keep on the Lookout: Cameron School of Business Star Graduates Enter the Workforce