Battleship's Arrival Was A Boom To Wilmington's Economy 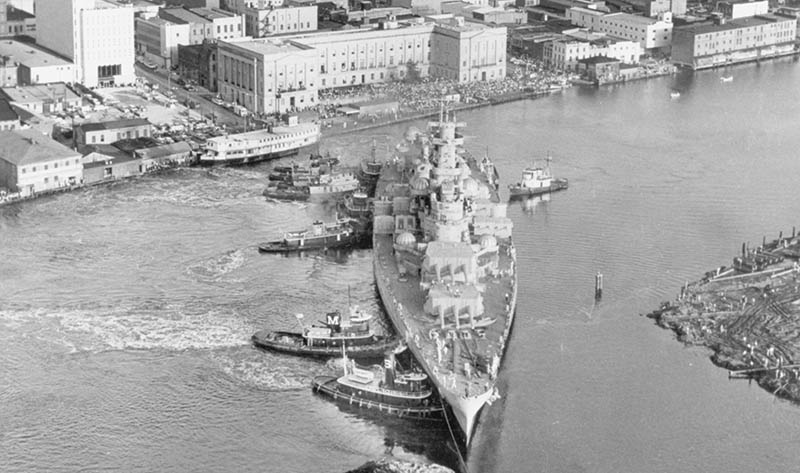 The ship has sat idle for 60 years, but its reach has been far and wide, not only for Wilmington’s economy but also its identity.

Today, the Battleship North Carolina is arguably the area’s most-visible and well-known landmark. And although the ship is the pride of Wilmington, it still carries North Carolina’s name. (The entire state rallied to save the ship, which was headed to the scrapyard in the late 1950s.)

As much as it serves as a tourist attraction and living history lesson, the ship is foremost a memorial to the state’s World War II veterans and the 11,000 North Carolinians who died during the war.

Described on its website as “moored in quiet dignity and majesty across the river from downtown Wilmington,” that setting wasn’t always as appealing as it is today – on either side of the river.

Once a bustling maritime/ industrial site, by the mid- 20th century the west side of the Cape Fear River was mainly barren other than the thick vegetation that had re-emerged on marshy Eagles Island. On the east side of the river, downtown Wilmington was on a downward trajectory, reeling from the 1960 departure of its biggest employer, the Atlantic Coast Line Railroad.

Amazingly, only a year after the decision was made to bring the ship from a New Jersey shipyard to North Carolina, on Oct. 2, 1961, the 730-foot vessel was standing watch over the Port City, carrying on the maritime legacy of Verrazzano, as well as the hundreds of World War II Liberty Ships built a few miles south.

Although the battleship is in many ways Wilmington’s “brand,” it wasn’t always a given it would end up here. Early on, Morehead City, Swansboro, Southport and Carolina Beach were also in the running to host the ship. Wilmington had one important advantage: a protected harbor farther away from the worst effects of hurricanes.

Wilmington was down but not out, the arrival of the battleship seemed to say.

Much work had to be done before the ship opened to tourists, including the removal of much of the deck armament and building a boarding system.

As a busy port and railroad city, Wilmington itself had little history as a tourism destination – a local sector pretty much isolated to the beach towns. With the railroad gone, area leaders felt that the city’s location near the beach was one of the best cards it had to play. But since there was no Wilmington tourism industry as we know it today, the city would have to build its own.

The battleship was one of those early efforts, building on the Azalea Festival. The Showboat, as it was known, was officially dedicated as the Battleship North Carolina in April 1962 and is one of the top tourist destinations in the state.

With the battleship anchoring the west bank of the Cape Fear, the redevelopment of downtown and the riverfront as a tourist/ recreation destination was the next big step, a movement capped by the construction of the Riverwalk in the 1980s.

Gene Merritt, a major player in the revitalization of downtown Wilmington, was a senior at New Hanover High School the day the ship arrived.

“It has clearly played a significant role in the evolution of tourism in our area,” Merritt said. “It is a major source of pride for the state of North Carolina, a cultural and economic asset that should be nurtured and encouraged.”

Click here to read more about the multi-million dollar project to repair and update the Battleship North Carolina.