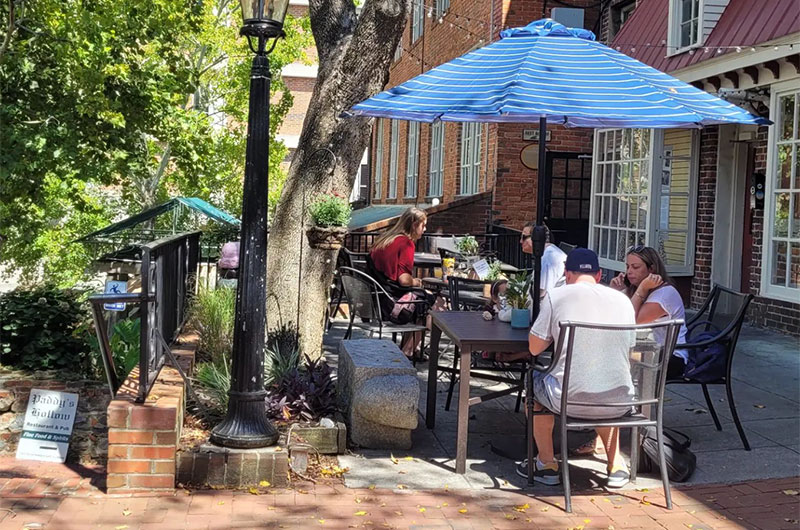 The shaded courtyard at Plan B offers an intimate, picturesque space for guests to enjoy refreshments. (Photo courtesy of Plan B)
Mary Long is taking her restaurant experience one step further with the opening of Plan B, a new space behind her current business, The Basics, which she has owned for 15 years.

The idea was not initially on the radar, Long said, but after a summer trip to Europe and space becoming available, Plan B became a “plan B” for Long.

The menu at Plan B, which opened Sept. 1, is in stark contrast to The Basics’ heartier selections. Steering away from fuller meals such as burgers and barbecue, the new business offers lighter options inspired by Long’s midday breaks at European cafés.

“I wouldn't plan on sitting in local cafés enjoying a period of downtime, but that would be exactly what would happen,” she said. “I enjoyed sitting still and letting the world sort of stream by me while I had a glass of wine or a small snack plate to refresh myself. It was never part of the grand plan for the day.”

Long said she believes the Southern downtown restaurant scene is ready for a touch of European flair.

Located in a shaded courtyard behind The Basics, the space at The Cotton Exchange was a natural fit.

“It was an intimate area for sitting and sipping coffee or enjoying light snacks,” Long said.

Plan B’s menu offers vegan options, fruit and cheese, charcuterie and rotating daily specials of small salads and dips. Pre-packaged meals and snacks are available to-go for those taking a quick lunch break or an easy dinner option. Long plans to add soup and hot beverages during the chillier months.

The spot is centrally located between hotels and theater venues.

“I hope folks who are venturing for a night out to the theater or a concert venue will find it convenient and relaxing to have an adult beverage and a snack in our little oasis,” Long said.