Serving Up The Most Read Restaurant Stories Of 2019 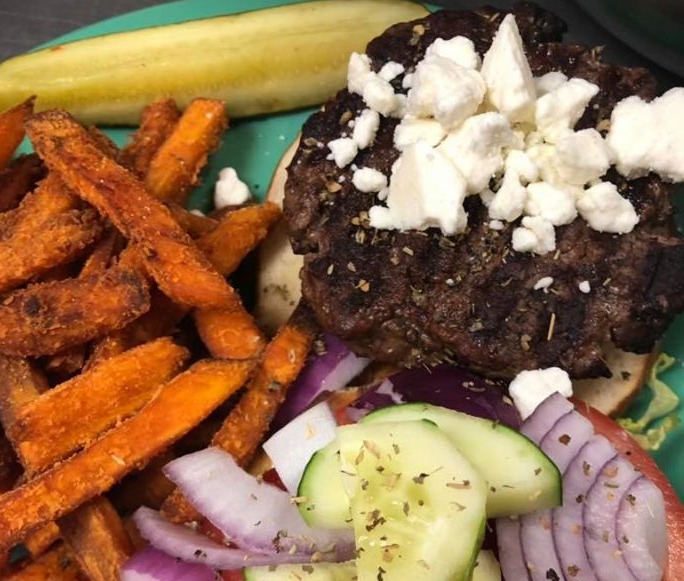 A Greek burger by Karen Taylor. Taylor closed her eatery at 731 N. Howe St. in Southport but planned to keep working as a private chef and caterer. (File photo)

Last year brought some major shakeups to the area restaurant scene. Here’s a look at the most widely read restaurant stories by the Business Journal's online readers.

1. Topping the list for the year is the December announcement of the closure of Taylor’s Cuisine Cafe & Catering in Southport.

Known throughout the area for catering events of all sizes and serving breakfast and lunch at 731 N. Howe St. for the past 14 years, owner Karen Taylor said it was with a heavy heart that she closed the doors after struggling financially since Hurricane Florence.

Taylor intends to keep the Taylor Cuisine Cafe & Catering Facebook page and to work as a private chef and caterer for in-home events. She hopes to eventually operate a food truck as well.

2. The second most widely read story was the sale of three of Ash Aziz’s restaurants to Urban Food Group of Raleigh.

Urban Food Group also operates restaurants in Raleigh, Charlotte and Denver, while Aziz continues to operate Il Forno Pizzeria at the Point at Barclay and Circa 1922 in downtown Wilmington. Another of Aziz’s previous restaurants, Junction 421, was sold in May. He is also working on a new concept planned for River Place, a major mixed-use project under construction in downtown Wilmington.

3. Coming in at No. 3: the April 2019 announcement of Bitty & Beau’s Coffee’s newest location in Annapolis, Maryland.

“After expanding to the south with our last two locations we decided it was time to go north,” said founder Amy Wright, referencing the stores that have opened in Charleston and Savannah since early 2018.

Founded with the intention of providing job opportunities for individuals with intellectual and developmental disabilities (IDD), Wilmington-based Bitty & Beau’s currently employs 80 staff members with IDD at its three locations and expects to hire an additional 20 employees at the new location, which is scheduled to open next month.

4. Next up, the closure of longtime Riverwalk cafe and wine bar, Le Catalan, to be replaced by Stalk & VIne.

After 18 years in business, Le Catalan owners Pierre and Marie Penegre decided to retire to Antigua. Once that decision was made, they worked closely with MoMentum Companies president Terry Espy and Jeff Chase, broker in charge with MoMentum, to find the right replacement for their Riverwalk restaurant at 224 S. Water St.

Stalk & Vine is owned by brewmaster and certified cicerone (also known as a beer sommelier) Zac Brown and specializes in a broad selection of local and regional craft beer, wine and unique cocktails, all paired with small plates.

5. Fifth on the list is the closure of the fast casual Italian concept Positalia, with the newly opened concept, Brunches, to take its place.

Positalia, which opened in July  2015, was owned and operated by Bullard Restaurants, a Raleigh-based restaurant group that owns numerous Burger King, Smithfield’s and Moe’s Southwest Grill locations throughout the state.

Brunches, owned by Danny and Earl McPherson of King Neptune Restaurant, opened in early December. The restaurant specializes in breakfast and lunch, making a weekend-style brunch an option any day of the week. The brothers plan to expand throughout the region, with a second location already in the works on Randall Parkway that could open this year.

6. The arrival of Chicken Salad Chick, an Alabama-based restaurant chain.

Local franchise owners Shane and Haley Pinder announced in June that they would be taking over the space at the entrance to The Forum that was previously occupied by Wells Fargo Mortgage.

7. The seventh most widely read story of last year was the proposal of a Panda Express to replace The Tilted Kilt Pub & Eatery, a Celtic-themed restaurant and bar, at 11 Van Campen Blvd.

Joy Sprenger and Paul Parker built their concept around using a network of WiFi-enabled mobile kitchens to efficiently deliver pizzas on demand.

Sprenger and Parker said they have implemented mobile technology, similar to that used by Uber, as well as ultra-compact, high-tech ovens that can bake pizzas in just 90 seconds, to deliver fresh, hot pizza in a fraction of the time it takes for brick-and-mortar locations to deliver. Pizzas are ordered via an app and are baked en route to the customer. Pizzas are also available at the company’s commissary kitchen at 2323 S. 17th St.

Founded in 1983, Panda Express is one of the largest fast-casual Asian dining concepts in the U.S. with over 2,200 locations nationwide. Panda Express’s bestselling dishes include its original orange chicken and award-winning honey walnut shrimp.

According to area manager Sajid Maqsood, 98% of Panda Express stores are company owned, including the Wilmington location.

“We see that the Wilmington market is growing in terms of residents and tourists,” Maqsood said.

10. And rounding out the top 10 was the announcement that three celebrity chefs would be returning to Wilmington for the grand opening of GLOW Academy’s new campus.

Emeril Lagasse, Guy Fieri and Robert Irvine, all participated in past fundraising events for the school and were slated to attend the grand opening of the school’s new multi-million dollar campus. But when it had to be rescheduled from early September to early October due to Hurricane Dorian, Fieri was no longer able to attend.

The school announced in November that chef Tyler Florence will host fundraising events in a private home and at the Country Club of Landfall this month.