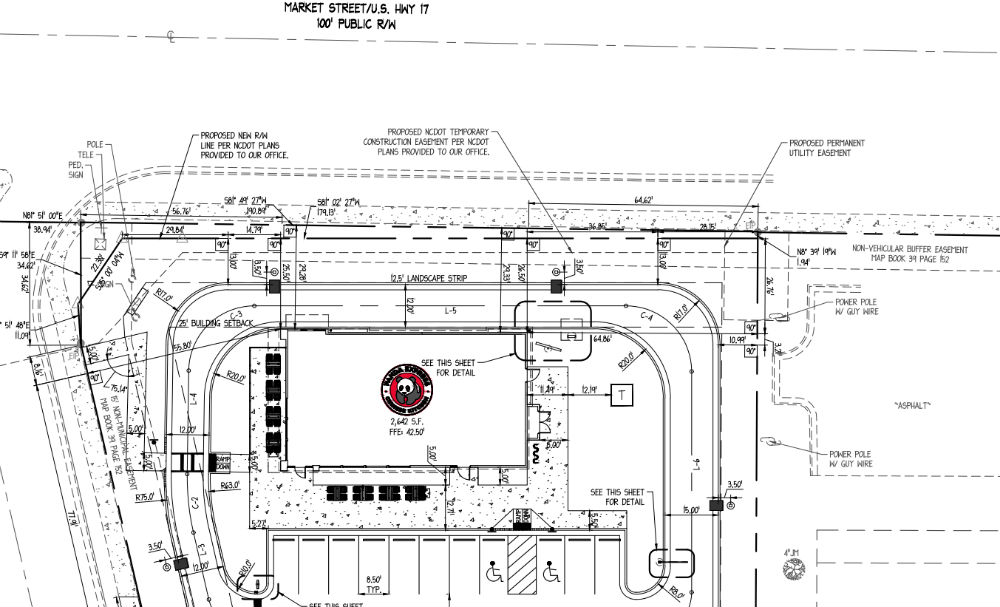 The plans show the Chinese food chain replacing Tilted Kilt Pub & Eatery, a Celtic-themed restaurant and bar, at 11 Van Campen Blvd. According to the plans, submitted by Panda Express Inc. of Rosemead, California, a 2,600-square-foot Panda Express with indoor and patio seating and a drive-thru would be built on part of the site closer to Market Street.

The plans, by Ingenium Enterprises of Tampa, Florida, also show parking spaces where the existing 5,600-square-foot building at 11 Van Campen Blvd., address of the Wilmington location of Tilted Kilt, is currently situated.

The seller/landlord of the property is listed on the Panda Express site plans as Hiren Patel.

In an email Wednesday afternoon, Panda Express Inc. officials said, "When selecting new locations, the Panda team looks for neighborhoods that have a strong population base as well as a regional retail draw. The daytime (office and industrial) population is also something we look at as a driver; however, there are many variables in our site selections process. We are excited by our growth in Wilmington."

Officials said the eatery will have 74 seats inside and 32 inside, and they hope to open the restaurant by the end of 2019.

Efforts to reach representatives of Tilted Kilt were not immediately successful Wednesday.

The city of Wilmington's Technical Review Committee is scheduled to discuss the Panda Express plans around 2:15 p.m. at its meeting Thursday, according to the latest agenda.

When Tilted Kilt officials announced that Wilmington would be getting a location of the Arizona-based national restaurant in 2014, Tilted Kilt had more than 70 restaurants across the U.S. In November, restaurant industry publications, including Restaurant Business, were reporting that a deal was in place for a group to buy the shrinking, now 34-unit chain.

The company's website no longer listed any North Carolina locations as of Wednesday afternoon.

Panda Express, on the other hand, marked its 2,000th location nation- and worldwide on Dec. 7, 2017, according to a news release. The chain, which was up to more than 2,100 locations as of November, is part of the family owned and operated Panda Restaurant Group, founded on the West Coast about 35 years ago.

The closest Panda Express locations to Wilmington currently include addresses in Jacksonville and North Myrtle Beach, South Carolina, according to the company's website.