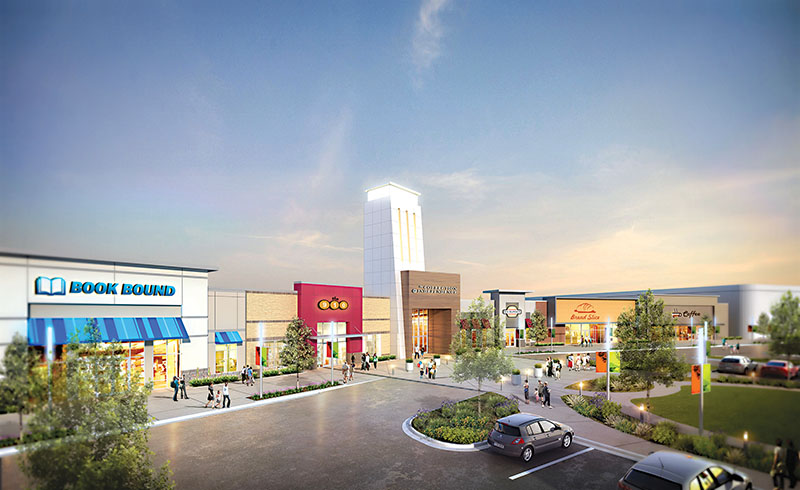 The owners of the mall released renderings in March that show their vision for how Independence Mall is expected to be transformed into an indoor-outdoor center. (Rendering courtesy of Brookfield Properties)
Good times and bad times hit Wilmington’s retail scene this year.

For the local industry, some of the good news was revealed in March when the owners of Independence Mall, which is expected to eventually be rebranded The Collection at Independence, unveiled renderings showing how they plan to transform part of the mall into an outdoor shopping center.

A grocery store could be one of the new retailers coming to the Cape Fear region’s largest center, according to plans submitted in June for the redevelopment project by Brookfield Properties, the company that owns much of the mall.

The plans also showed that the largest retailer would be 50,000 square feet along the new outdoor corridor on what's now the former Sears side of the mall, along with two new restaurant outparcel buildings closer to Oleander Drive.

But Sears itself was part of the bad news. The closures that have hit much of the company for the struggling retail chain, which filed for bankruptcy in October, became evident in Wilmington when store closing signs for the Sears at Independence Mall began showing up in April. The Sears eventually closed, and space in the mainly empty wing was devoted to a base for FEMA and the Small Business Administration after Hurricane Florence made landfall Sept. 14 near Wrightsville Beach.

Another national retailer to close in Wilmington this year was Toys R Us, 4510 Oleander Drive, where the space was temporarily occupied by a Halloween store. By the end of June, Toys R Us had shuttered all of its toy stores in the U.S.

Elsewhere, service-oriented businesses began welcoming customers in new retail space, including buildings at The Pointe at Barclay, Mayfaire Town Center and the commercial portion of RiverLights. And developers at The Pointe and RiverLights were taking steps toward adding space to their projects. In another example, on Oleander Drive near Wrightsville Beach, numerous retailers were close to signing up for first-floor space in a new mixed-use complex called Bradley Creek Station.

Meanwhile, the Brookfield Properties site plans for Independence Mall did not indicate which specific retailers might be part of the redevelopment. Attempts to obtain an update on the plans were not successful as of press time, and the project was still listed as active but under review on the city of Wilmington’s project tracking website.

The 'Magic' begins Monday for new store on Oleander Drive