Vertex: Signs Of Growth Or Trouble? 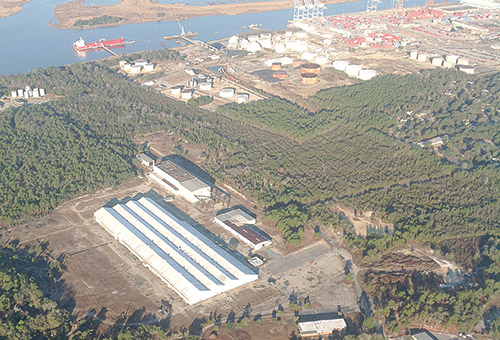 • Potentially the region’s largest new employer in a decade.

• A start-up manufacturer with a handful of backers.

• A link to a global, multi-billion dollar market.

Ever since Vertex Rail Technologies rolled into town in November, local business and political leaders have been talking tracks and trade, pinning hopes for economic gains on the company’s promise to hire more than 1,300 people and sell thousands of advanced new rail cars.

Seven months later, a more complex picture has emerged of the company and its founders. The firm’s CEO has filed for bankruptcy on behalf of another company he owns, and Vertex has taken one of its founding partners to court. At the same time, company officials say Vertex is speeding toward the start of production with an influx of new capital and expertise.

Majestic’s initial investment was $6 million, according to a copy of the joint venture shareholder agreement that Vertex provided to the Greater Wilmington Business Journal. China Southern Railway is providing something money can’t buy, Sayers said.

“They haven’t contributed cash; they contribute engineers and technical manufacturing know-how,” he said.

In exchange, China Southern Railway, which merged in June with China Northern Railway to form CRRC Corporation Ltd., will eventually own half of Vertex Railcar Corp., Sayers said.

“Their investment mandates don’t allow them to invest physical capital into a company until it’s fully operating so after we complete the first several hundred cars, we’re then an operating company,” Sayers said. “They can then contribute tens of millions of dollars to buy down the equity partner, Majestic, and [Vertex Rail Technologies].”

In an email to the Business Journal, a representative of the Chinese firm’s subsidiary said the joint venture was registered April 22.

CRRC Corporation, headquartered in Beijing, has 175,700 employees, according to an article in International Railway Journal. The value of the merged companies’ assets was nearly $50 billion in 2014, the article says.

Croteau said the partnership will have no impact on the plan to hire more than 1,300 at the Wilmington facility, and he will continue as CEO.

“They have committed to do everything we’ve said we would do in Wilmington and more,” he said. 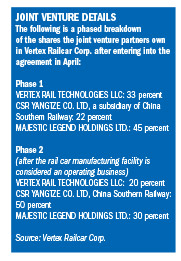 In the days after Gov. Pat McCrory traveled to a Raleigh Street site to announce that Vertex would produce rail cars in the former crane manufacturing facility there, the community found out more about the company from Croteau.

Vertex Rail was brought to the attention of local economic development leaders by the industrial broker representing the building and property at 202 Raleigh St., currently leased by Vertex.

“As a startup company, Vertex declined to apply for financial incentives. Nonetheless we gained insight into the company and its plans through interviews with its executives and reliance on due diligence of allies. This was augmented by economic intelligence we gathered independently regarding the current market potential for freight-railcar manufacturing,” said Scott Satterfield, CEO of Wilmington Business Development, in an email reply to a question about whether WBD conducted a background check on Vertex Rail Technologies before the November news conference.

“We were similarly satisfied in and relied on the background information of the property owners who engaged in their own due diligence. Seen in the context of its overall industry and the strategic transportation needs of the U.S. domestic energy industry, along with our reliance on the due diligence of our allies as noted earlier, we were satisfied that the viability of Vertex’s business plan more than offset any uncertainties of assisting a start-up entity.”

In interviews and appearances last year, Croteau said the skill sets needed to make high-end vessels and tanks at Vertex Fab & Design, the company he owns in Massachusetts, was one of the reasons it made sense to start a firm to produce rail cars.

Croteau’s resume, sent by Sayers to the Business Journal in February, says that at Vertex Fab & Design, Croteau “created a strong foundation for substantial future growth by the company.” On March 2, Croteau signed documents to file for Chapter 7 bankruptcy on behalf of a company he had formerly referred to as a “solid performer.”

In interviews in May, Croteau said he had tried to save Vertex Fab & Design after purchasing it in 2012, even using $1 million of his own money in the attempt, but the company “was just too badly flawed from the beginning.”

Croteau said this month in an email and in person that he’s done talking about the past. The email came in response to some questions about the companies he used to lead, including, “Which former business that you led would you say was your most successful?”; “Is it accurate to say that your former businesses are no longer in operation?”; “Would it be possible to talk to any of your former colleagues at any of your previous businesses?”

Croteau responded in an email, “It seems you wish to focus on past issues good and bad and that does not interest me in the least … I am moving forward aggressively on all fronts for vertex rail and wilmington and will have no more discussions about historical issues … I have had many  personal/professional successes and many failures as well and have discussed this openly many times but I only want to focus clearly on the future from this point forward.”

Jeffrey Horvitz, a private investor who sold Vertex Fab & Design to Croteau, talked about what it was like working with Croteau in the past.

“He’s a great salesman and very enthusiastic. He conveyed the utmost sincerity,” said Horvitz, who claimed in a lawsuit filed in Massachusetts in October that Croteau and Vertex Fab & Design owed him at the time more than $500,000 on a promissory note and more than $252,000 for equipment leases.

But Horvitz said Croteau was also “frustrating” to work with. The sense was often “prosperity is just around the corner,” Horvitz said. “He may have believed that.” In the end, Vertex Fab & Design continued to lose money, according to Horvitz and a statement of financial affairs filed June 3 as part of the firm’s bankruptcy documents.

Vertex Fab & Design owes the IRS $500,000, the Massachusetts Department of Revenue $110,000 and the Massachusetts Department of Unemployment $80,000, according to bankruptcy documents. The total in unsecured claims owed to creditors is more than $1.6 million, the documents say.
Included on the list is Vertex Rail Technologies LLC, with a claim in the amount of $672,000 described as “monies loaned” and “subject to setoff.”

In another pending case filed in Massachusetts, Vertex Rail Technologies is suing Daniel Bigda, one of the founding partners who still owns 35 percent of the company.

Croteau is the majority shareholder in Vertex Rail Technologies with 51 percent, while Scott Bauer owns 8 percent, attorney Katherine Perduta 5 percent and an unnamed investor has one percent, Croteau said.

“In the beginning of [Vertex Rail Technologies], Dan was instrumental to introducing us to the market and giving us some expertise, but that kind of quickly fell to the wayside,” Croteau said.

Though Vertex provided resumes for the other three founding partners, Perduta declined a recent interview request, and Bauer was said to be traveling and unavailable.

Croteau said he bought Boxcar Services from Bigda, who then later formed Boxcar Companies LLC, “a competing railcar manufacturing, sale and leasing company, in breach of his fiduciary duties as a minority member of the Plaintiff,” the complaint says. According to a purchase agreement from 2013 included in the complaint, Croteau paid $1 for Boxcar Services.

“He’s basically taking a name and a company he sold, and he can’t use it just because he decides he wants to do it again. It’s not right,” Croteau said.

The complaint says that as a result of Bigda’s and Boxcar Companies’ “competitive and divertive activities, Vertex has experienced a sharp decline in quotes for oil tank cars, which was Vertex’s most lucrative/ profitable product, from approximately $4,000,000,000 in 2014 to approximately $700,000,000 in 2015.” The case is still pending in Massachusetts Superior Court.

“We think the complaint is meritless, and we have very serious counterclaims that we will be pursuing against both Vertex and Mr. Croteau in the very near future,” said Bigda’s attorney Timothy Van Dyck, of Bowditch & Dewey in Framingham, Massachusetts. “They haven’t provided information about Vertex Rail to which my client is entitled – the joint venture agreement as well as other financial information – and that suggests to me that they’re hiding the ball.”

Croteau did not respond by press time to Van Dyck’s comments.

Vertex Rail Technologies had previously filed a motion for a preliminary injunction against Bigda that was denied June 1. Vertex had “failed to show a reasonable likelihood of success or of irreparable harm,” the clerk’s notice of the injunction says.