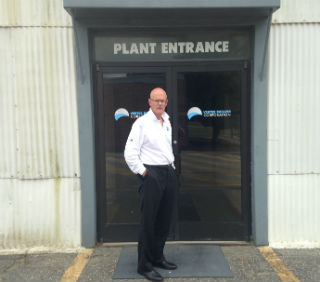 Vertex Railcar Corp. CEO Don Croteau is shown Thursday at the company's plant at 202 Raleigh St., where crews are renovating and upfitting the facility in preparation for the manufacture of rail cars. (Photo by Cece Nunn)
After a timeline setback that company officials say was caused by a delay in regulation approval, Vertex Railcar Corp. has visibly picked up steam in its efforts to get up and running in the areas of site planning, hiring and retooling its manufacturing facility, CEO Don Croteau said this week.

Part of that progress includes the submittal of some site plans to the city of Wilmington's planning department, which were posted June 3 to the city's project tracking website. The plans, submitted by WK Dickson & Company Inc., indicate minor improvements as Vertex prepares to manufacture rail cars at 202 Raleigh St. The details are currently being reviewed by the city's planning staff, said Ron Satterfield, assistant city planner, in an email Friday.

Croteau said Vertex Railcar Corp., formerly referred to as Vertex Rail Technologies, has added 10 employees to create a larger team that will take the company's facility through the federal certification process. Efforts to offer jobs to another 26 workers are under way, Croteau said Thursday, and the first 10 are expected to start by June 16 before they travel to China for some training.

"Some of the equipment we're buying is coming from China, and they're going to learn how to run it and operate it," Croteau said.

That team will be able to pass along their knowledge to fellow employees, he said.

In November, Gov. Pat McCrory, Croteau and local officials announced that Vertex planned to hire 1,300 people in Wilmington to produce new rail cars for an industry that's shown a tremendous increase in demand. That demand is expected to continue and expand as a result of new federal regulations for the improved safety of tank cars, some of which carry crude oil.

"We could not have written a better set of regulations," Croteau said, adding that over the next five years, rail companies will have to either retrofit or replace about 200,000 tank cars because of the new rules, putting Vertex in the position of being able to meet some of that demand.

A delay in the release of those regulations slowed some of Vertex's plans, but not anymore, he said.

Croteau said Vertex has released a purchase order to a local company that will be conducting some of the construction work, including laying down tracks for the movement and storage of new rail cars. The company is Civil Works Contracting, he said, a firm with an office at 221 N. Front St. in downtown Wilmington. That work is expected to cost Vertex about $4.6 million, he added.

Croteau said the company has also released purchase orders for $14 million worth of material needed to make the first 300 cars, and ordered a $4.1 million blasting paint system from Blast-One, a company headquartered in Columbus, Ohio, that supplies equipment to the corrosion control and protective coatings industry.

He said CWC is expected to start delivering materials and equipment for their part of the project as early as next week.