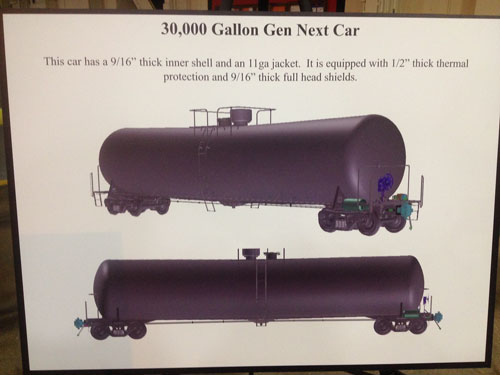 Salaries will average about $40,000 annually, according to Wilmington Business Development. Hiring is expected to begin in January, said Don Croteau, CEO of Vertex Rail, and at least 1,250 of the Wilmington facility's 1,342 employees "will come from this area."

The firm will invest $55 million to $60 million at the new plant to make technically advanced and safer rail cars, McCrory and Croteau said Thursday.

Vertex will move into the former Terex Crane facilities at 202 Raleigh St., where Thursday's announcement came at an invitation-only event hosted by WBD at the 68-acre site.

Croteau said the company is leasing the facilities. The property was listed recently for sale on Loopnet for more than $9.5 million.

He said that although the buildings on the former Terex site are the right size and in the right location to make the rail cars, the economic development and government leaders helped the company make its final decision to come to Wilmington.

"I think every company that's doing something of this size has to go through a fairly involved process. You have to look at the building, the surrounding area, access to the port, access to the street, access to rail. You have to look at the community in general and we had several states, let's just leave it at that, that offered us the opportunity to come there as well. But Wilmington has shone well over everyone else mostly because of the people we worked with over the last 10 months," Croteau said.

Vertex will spend the upcoming months refitting the building with the goal of making 1,400 cars in the first year of operation and ramping up to 4,500-5,000 cars a year.

In the coming years, McCrory said, the facility is expected to help replace 70,000 obsolete rail cars as new federal specifications are required.

"We're going to have the company right here in Wilmington to make that difference and meet that need in both safety and of the new federal requirements," he said.

If its projected number of employees are all hired, Vertex will be one of the top 10 largest employers in the Cape Fear region, according to a Greater Wilmington Business Journal survey of companies.

On Thursday, the governor said Vertex will help provide work for members of the military coming back from overseas.

"It is my hope that many of these ... workers will be military veterans, and I think that's one of the great selling points of Wilmington and North Carolina is that we have military personnel coming home from Afghanistan and Iraq, and there will be a major recruitment and effort to bring veterans to this plant," McCrory said.

Croteau said a facility ramp-up will take about three to four months, and facility approval about one to two months. The company wants to run two shifts a day, five days a week.

Workers will receive training at Cape Fear Community College, officials said Thursday. The first of several job fairs will be held from 10 a.m. to 1 p.m. Friday at CFCC's downtown campus in the Schwartz Center, 601 N. Front St. A community day will be held at the facility Dec. 6 to welcome members of the public, Croteau said.

Providing a picture of the demand for rail cars like the ones Vertex is planning to build, Croteau said the company's larger competitors have lengthy backlogs and in the past six to eight weeks Vertex has quoted $7 billion worth of the cars "and we haven't built any yet."

That backlog, fueled by the fact that 18 to 20 oil-well drilling permits are being issued every day and those permitholders will need cars to carry their products, has lent a sense of urgency to establishing Vertex's Wilmington facility.

"Our biggest goal was to get here and get going because we want to get to the market as fast as possible," Croteau said.

He said the company is not receiving any incentives and didn't need any because of all of the other attributes, from workforce and facilities to the people of the community, that made Wilmington attractive to Vertex.

"At the end of the day, the end of the fight, all the other things you offered, required infrastructure, support from the government, support from everyone -- the city, the state -- the people we can hire, the veterans -- everything you offered was so good, so strong, that the incentive issue really for us was very minor," Croteau said.

Tony Tata, secretary of the N.C. Department of Transportation, said the state will be making improvements to infrastructure that will help Vertex as well as studying additional needs in the area around Raleigh Street.

DOT and the N.C. Department of Commerce are contributing $305,000 from the Economic Development Fund for the restoration of the River Road crossing and signals, according to a governor's office news release on the Vertex announcement. Additionally, the rail division of DOT is contributing $200,000 from the Freight Rail & Rail Crossing Safety Improvement Fund to improve the rail spur. The release explains that the safety improvement fund receives money from dividends received by the state from the N.C. Railroad Company.