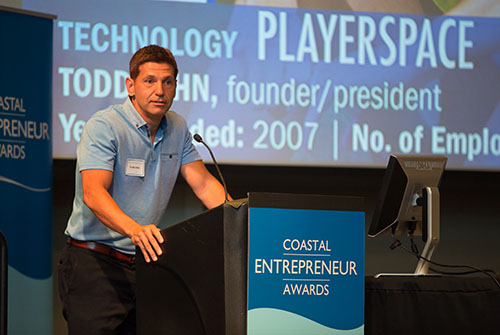 Todd John, founder and president of PlayerSpace, accepted the award Wednesday morning in front of an audience of more than 300 during the Greater Wilmington Business Journal’s Coastal Entrepreneur Awards (CEA) ceremony at the University of North Carolina at Wilmington.

The annual awards are a joint program between the Business Journal and UNCW's Center for Innovation and Entrepreneurship.

PlayerSpace uses all its own tech resources to code and develop its exclusive technology platform and mobile app. The company shares the market with mega-organizations that include Blue Star Sports, Dick’s Sporting Goods, Sports Illustrated and NBC Universal.

The company first won a category Coastal Entrepreneur Award in 2013, though not the overall prize.

This year’s presenter of the award was Amy Wright, founder and owner of Bitty & Beau's Coffee, the 2016 Coastal Entrepreneur of the Year.

Introducing this year’s winner, she said, “Perseverance is going as far as you can go and then taking another step ... This year’s entrepreneur of the year has persevered. His dream was to see people celebrated for the sports they play, not the sports they watch. Now, he’s become the one to watch as his company is doing transformational things with the largest recreational sports market in the world.”

John was joined by PlayerSpace employees, his wife and children as they accepted the award, a Kids Making It-crafted wooden surfboard, which is passed down from entrepreneur to entrepreneur each year.

“It’s about bringing as much value to another person’s day as you can,” John said during the ceremony. “I got to a point in my life where I just wanted to know what my calling is and ... I said, ‘I’m going to take everything I’ve learned about sports and what I’ve learned about technology and put it into one thing.’ And that was PlayerSpace. And I literally put everything into it and then some.”

After the ceremony, John said he was "very appreciative" to be this year's winner.

"There's just so many great companies that were nominated. I was just thrilled to be in that list," he said. "I feel a lot of responsibility now to take it to even bigger levels, just to show that things like this should serve as a catalyst to the next great thing, not just a celebration of what you accomplished."

Judges deliberate and pick 10 category winners in the CEA process. The nominations submitted to the Business Journal represent a cross section of the region’s business community.

Editor's note: This version has been updated to include Cavanaugh & Associates, which was a winner in the  Biotech category.