2017 CEA Winner In Retail/Hospitality: Half United 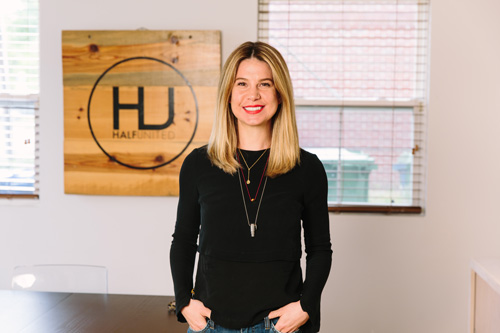 Carmin & Christian Black, co-founders | Year Founded: 2009 | No. of Employees: 10 (Photo by Lindsey A. Miller)
Half United not only continues to expand, but the brother-and-sister team is charting a future to focus on the accessories retailer’s core initiative of feeding hungry children.

Speaking recently from New York City, Carmin Black said the company is launching an online test with a new department buyer at Nordstrom.

“We’ve worked with Nordstrom for many years,” she said. “They have a new buyer for our department. She’s going to put us online with some of our new products. It launches at the end of next month [May]. Should that do well, we’ll continue to grow with her as our buyer, and the line will go to the brick-and-mortar stores.”

Those products include necklaces, bracelets and earrings made of coins from each of the four countries where Half United helps feed children.

The Wilmington-based company gives a portion of money from customer purchases to anti-hunger organizations in several countries, including the U.S. As the company continues to update its apparel and accessory offerings, it also is continuing to evolve its giving program.

The company’s signature bullet- top jewelry is a mainstay.

“Early on when we started, we wanted people to have a wearable symbol for fighting hunger,” Carmin Black said.

They tried many styles incorporating rice. When someone donated a bag of bullet caps, they shifted their thinking to a more concrete symbol.

“Seven years later, that is our No. 1 selling product, and that is what carries this company,” she said.

Carmin Black said the company has spent more than five months working with a fair-trade organization in India to create a line of T-shirts. She said they were dissatisfied with what had been available to them.

“We felt a lot of the shirts were ill fitting, just cheap,” she said, adding that now they will be working with organic cotton and controlling the process and fit. “Just to get one shirt right has been a pretty eye-opening process.”

Half United hopes to launch it in the spring with a line for men and women that will hit retail stores in the fall.

The company also is working toward a line of small leather goods to be made in Haiti with Haitian- sourced leather.

“We’re restructuring how we plan our giving,” she said. “We’re making sure our customers, first and foremost, like helping people in need more than just pushing the fashion aspect of the company.”

That focus includes talking to potential investment partners, which might provide ramped-up online marketing as well as create opportunities for sustainable jobs for families in the U.S. and abroad, Carmin Black said.

“We want to feed children whose parents we employ. It would be more in the manufacturing side,” she said. “If we’re hiring artisans, we need to understand their needs and their children’s needs. It’s really exciting because it’s a way to help more people in need.”