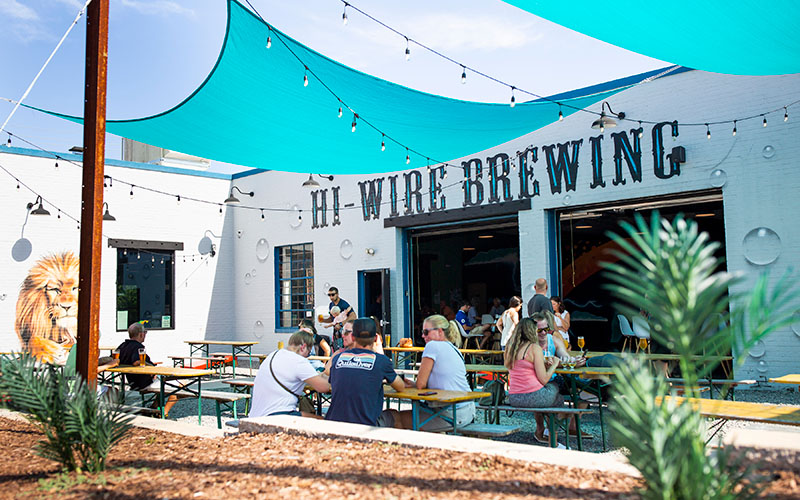 (photos by Madeline Gray & Michael Cline Spencer)
As Princess Street sees more redevelopment projects in the pipeline, food and drink have been the initial strategies to entice people to stop.

The area, nestled along Princess Street between New Hanover High School and downtown Wilmington, was dubbed the Soda Pop District – a reference to the former Coca-Cola bottling plant at Princess and 10th streets that serves as an anchor to the surrounding activity.

Like other outlying neighborhoods dotted around downtown attracting redevelopment – South Front, Cargo District, North Fourth – new restaurants and breweries have been key to build up traffic.

New establishments for the Soda Pop blocks, including Hi-Wire Brewing, seem to be just the start.

Earlier this summer, Cugino Forno, a restaurant specializing in Neapolitan-style pizza opened its doors to a strong response.

“We didn’t necessarily look into the Wilmington market, but it has worked out well,” said Naim Erol, managing partner of Cugino Forno.

Erol said that he and his business partners were approached by neighbors at Hi-Wire to open a location in Wilmington. After some market studies, he and his cousins decided Wilmington would be right for their next spot. The Wilmington location joins five other Cugino Fornos in North Carolina and Maryland. 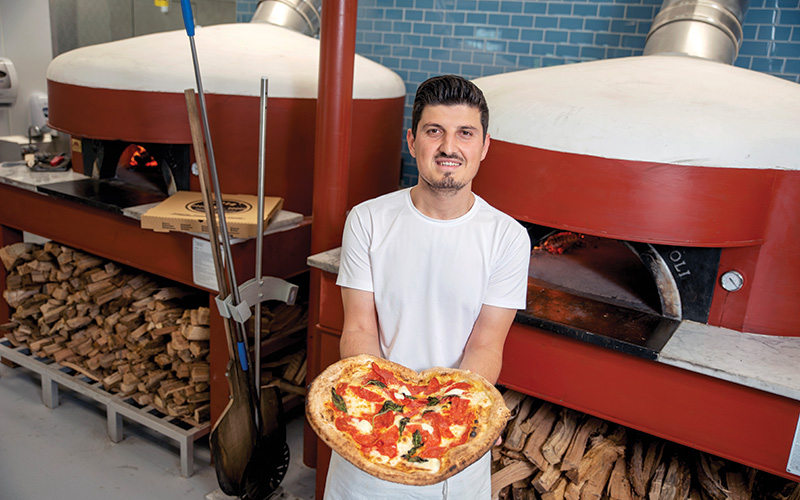 “We are neighbors with Hi-Wire at our Durham location as well, and we are great friends, so it’s a win-win situation,” said Erol, who moved to Wilmington to manage the new location.

If initial traffic is any indication of the success of Hi-Wire (which opened in Wilmington in the fall of 2020) and Cugino Forno, the move proved a smart one. On any given evening, the parking lot is full, and cars are lined along the streets. Both locations also have outdoor seating.

“We also get lots of walk-ins from people who live nearby,” he said, adding that so far Cugino has seemingly attracted locals rather than tourists.

The Cugino Forno space is attached to Hi-Wire – 1020 Princess Street, a block from the Coca-Cola bottling plant – and was renovated before opening. The building’s former life was as a car dealership, built in the 1940s.

“I see this whole area as a sort of new family destination,” Erol said. “We have pizza and salads and gelato. They have beer and ping pong tables, so we draw all ages.”

A longtime staple on the street, Folks Café sits on the corner of Princess and 12th streets.

Owners Tammy and Juan Pacini have been in business at the location for 22 years and have seen the coming and going activity. 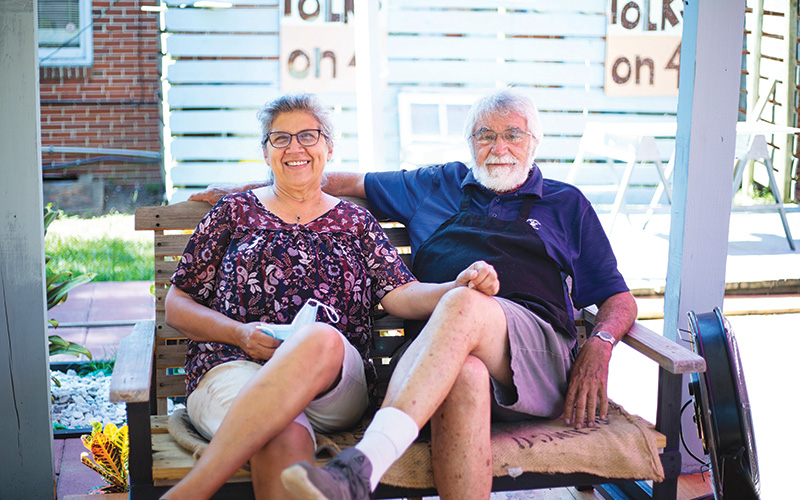 “It’s a process you know,” Juan Pacini said. “It really has been seven to eight years of changes, and then some places closed, and others came. And now, there is a whole different environment here.”

He said that when they first opened Folks Café, there was only a handful of businesses – a convenience store, a thrift store and a laundromat. Many of the other buildings were boarded up.

Still, the Pacinis wouldn’t give up on their business.

“It took some time for Brooklyn (Arts District) area to develop, but look at it today, it’s thriving. What Andy is doing, is something wonderful,” she said.

Pacini is referring to Andy Hewitt, of Parastream Development. Hewitt and Sandy Thorpe have driven investment in the blocks, which in 2019 first bought the building to develop the Hi-Wire Brewing taproom.

Last year, Parastream purchased buildings on three blocks for $8 million dollars. The deal included the Coca-Cola bottling building that is now in a first phase of renovation as well other buildings and property in the area.

One of those nearby buildings Parastream bought will be redeveloped and turned into Raleigh-based Bowstring Brewyard’s Wilmington outpost. The brewpub is expected to open at 1002 Princess Street sometime in the middle of next year. The Electric Bottling Co. originally used the building as a soda bottling plant, eventually selling it to Coca-Cola.

The long-term plan for the main Coca-Cola plant will be a multi-tenant, urban-flex warehouse that is ideal for a variety of uses, including makerspace to accommodate light manufacturing, assembly, warehouse, and distribution in addition to office and retail with storefront opportunities, the developers have said. Plans also include communal loading docks and drive-in bays, along with other shared amenities. Forty percent of the space is already leased before the building is even move-in ready. 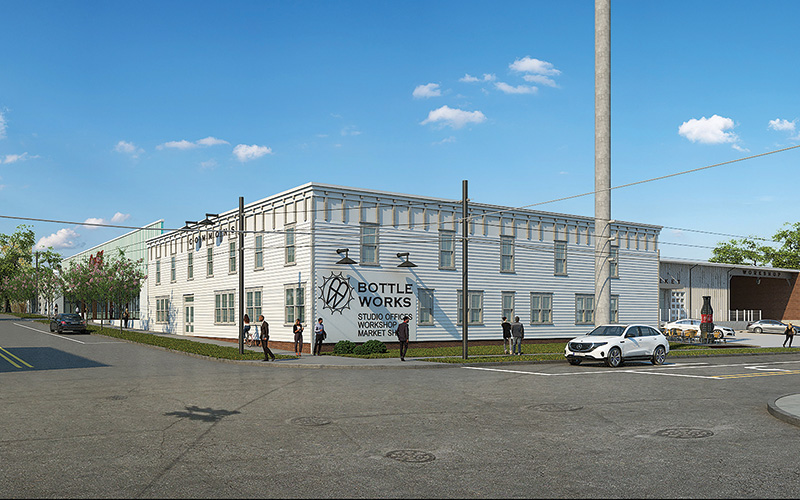 The second phase plans will unveil the 1920s-era bottling works building that has been hidden by metal panels along the corner of 10th and Princess streets for decades. The building was Wilmington’s first bottling plant, officials said.

The goal for The Bottle Works Building project is to “reactivate the neighboring streetscapes,” said Bruce Bowman, principal with Bowman Murray Hemingway Architects, which is working on the project that also includes Monteith Construction co.

A new mercantile storefront is planned along Princess Street.

“The Bottle Works Building is a unique product coming to Wilmington offering well-designed urban flex space for makers who need a central presence downtown that could get lost in an industrial park setting,” says Sandy Thorpe, a partner with Parastream Development.

Plans for the new look of the building will also be unique. Artist renderings show an updated, freshly painted building that will also include film inspired graphics as an ode to the nearby Cucalorus Film Festival’s headquarters: Jengo’s Playhouse.

When all done, the building will be an interactive space for tenants as well as customers, according to Thorpe. Parastream expects manufacturing as well as retail and hospitality to be filling the spaces of the building.

For Folks Café’s Tammy Pacini, all the growth that has happened and anticipated is welcome news.

“Today, we see people walking to the new places. Some come here. Some are families and others are just young people out and about,” she said. “But it’s nice to see them walking in the neighborhood and enjoying themselves. We have been patiently waiting to see this, and now it’s happening.”