The Frost Market Heats Up 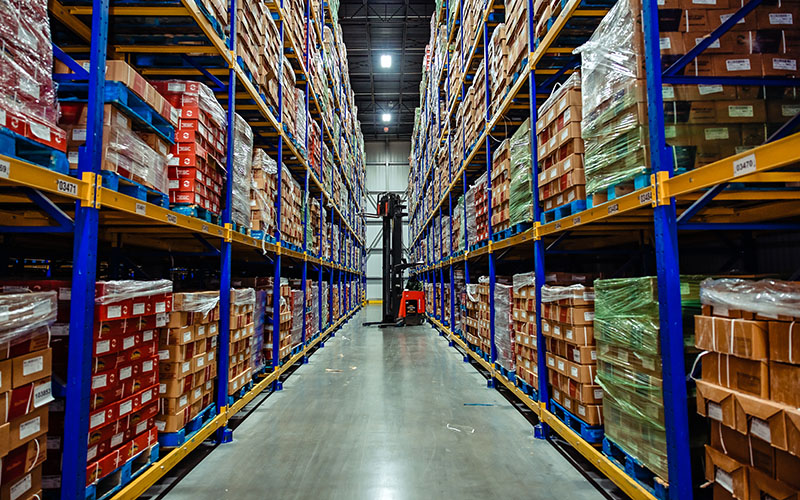 The Port of Wilmington Cold Storage facility is the area's only existing cold storage warehouse open today. (Photo by T.J. Drechsel)
A nearly half-billion-dollar tranche of private capital investments in cold storage is being planned in the Wilmington region.

The infusion of funds into an otherwise sparse local cold storage marketplace is expected to result in the addition of nearly 2 million square feet of cold storage warehouse space within the next few years. Several participants in the cold storage world say Wilmington currently has too little of the space – and adding more could create jobs, drive more goods through the port and amp up the regional economy.

Of the four proposed developments, each are planned to feature an expansive temperature-controlled warehouse larger than 200,000 square feet. Capabilities among the projects range from the option to store refrigerated and frozen goods to features geared toward serving the agricultural or life science sectors.

“Wilmington is vastly underserved from a cold storage perspective,” said Josh Lewis, chief strategy officer for RL Cold. “If you look at any other port city, even smaller port cities, there’s three, four or five cold storage facilities there today.”

Lewis, part of the team building a $100 million refrigerated warehouse at the Pender Commerce Park that broke ground in April, said the area’s lack of cold storage space to accommodate the state’s food manufacturers and processors was surprising.

Nearby protein producers have traditionally sent their products to be exported at larger East Coast ports, according to Lewis. “Logically, it makes more sense” to send locally produced products through the Port of Wilmington, he said.

The Port of Wilmington historically has not been a major player in cold chain. It saw less than 1% of East Coast cold-chain imports during the first quarter of 2021, according to the Journal of Commerce.

But as activity for refrigerated cargo increases nationally, local port officials hope to capture more of the trade.

In 2020, a $14 million investment allowed the Port of Wilmington to add 540 refrigerated container plugs, which connect the specialized containers to a power source in a dedicated container yard. In February, the ports authority authorized adding another 704 plugs in a nearly $23 million project set to be complete next year. Recently, the port added an 8,000-square foot chiller facility, which is mostly dedicated to inbound produce headed to grocery stores. 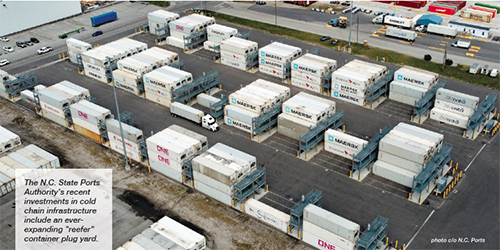 The added capacity would give the region the ability to target import commodities such as fruits and vegetables from South and Central America to balance equipment needs, said Scott Satterfield, CEO of Wilmington Business Development.

“Cold storage warehouses have clearly been a missing component in our region’s property inventory,” he said. “We identified that in recent years and have been working closely with our partners at N.C. Ports on this sector recruitment initiative.”

The region’s first and only standing private cold storage space opened in 2016, arising out of USA InvestCo’s initiative with the Port of Wilmington Cold Storage (PWCS) facility. Located on port property, the facility was developed for $15 million and stands at 101,000 square feet – about half the size of the handful of projects being planned today.

Chuck McCarthy, president and CEO of PWCS, said the facility is operating at 91% of capacity, noting that activity temporarily slowed in the spring with the avian bird flu outbreak.

Operations hit a snag due to the pandemic, McCarthy said, and the facility averaged about 60% of capacity in 2020. Though business is steady now, McCarthy wouldn’t double his current operations to meet market demands.

McCarthy said he is skeptical that the local market can handle the incoming pipeline of speculatively planned cold storage space. “Ask yourself, why there hasn’t been business before now? And what’s changed in this market? I don’t know of anything that’s really changed,” he said.

New entrants in the space represent competition, McCarthy acknowledged, which could put pressure on rates. With a staff of 30, PWCS is a service-oriented business that works with many distributors in North Carolina, representing a small aspect of the overall export equation a company like Smithfield Foods relies on.

“Is it a ‘Build it and they will come?’ Or is there an actual need for that space right now?” McCarthy said.

“I can’t really answer that. If it were my money, I don’t know that I would jump out here and build 300,000 square feet of space,” he said, adding, “Maybe they know something I don’t.”
Like McCarthy, Richard Mayes, managing partner of Fresh Continents, said he has doubts that the region is ready for “a glut of speculative cold storage space.”

“Wall Street has identified cold storage as a hot real estate investment sector,” he said.
But he said there is demand for the kind of space his team is developing under an owner-operator model.

Fresh Continents is planning an owner-operator facility in Burgaw (similar to PWCS), which means the developer will also run day-to-day activities and work directly with clients. The company’s first 270,000-square-foot phase of the total 450,000-square-foot venture will serve the state’s agricultural products, including produce, poultry and other proteins for export, import and domestic distribution, Mayes said.

Planned to open mid-summer 2023, it will be located strategically near rural agricultural producers and adjacent to a major food processor.

As for RL Cold, a subsidiary of real estate development firm RealtyLink, Lewis said he’s comfortable with his company’s position, especially given that they’re the first to break ground out of the batch of cold storage proposals.

“Most of these other developments are really approaching a different product type and different opportunity than what I’m looking at,” he said. “Ours was to address the import-export business for the Port of Wilmington … Essentially, you’ll have a ton of different food, all of these different customers, all under one roof.”

A flexible building design, widest temperature variance available (ranging from -20 to 55-plus degrees Fahrenheit) and space designed to meet customer demand will allow the facilities to “store any and all product, from frozen, to chilled and those requiring ambient storage,” according to Cold Summit Development President and CEO Scott Pertel.

“We chose Wilmington for the dedication and capital commitment of the N.C. Ports team to increase refrigerated cargo container infrastructure at the port over the last few years, along with the additional increased capacity that they are undertaking now,” said Pertel, a New Hanover High School graduate. “We are big believers in the economic development team in Wilmington and have been witness to the surge in population growth, supported by robust housing deliveries and job creation.”

RL Cold, which bills itself as the largest cold storage developer in the nation, is strategically building similar facilities in key markets, fueled by $1 billion in private equity funds, Lewis said.

And at ILM Business Park, there are plans for 750,000 square feet of cold storage space for two phases of speculative development by CIL Capital to target the life sciences industry.

Strategically positioned next to the airport, those facilities won’t compete with what RL Cold is planning, according to Lewis.

“Can the (cold storage) market support drugs and vaccines and food?” Lewis said. “I would say absolutely.”