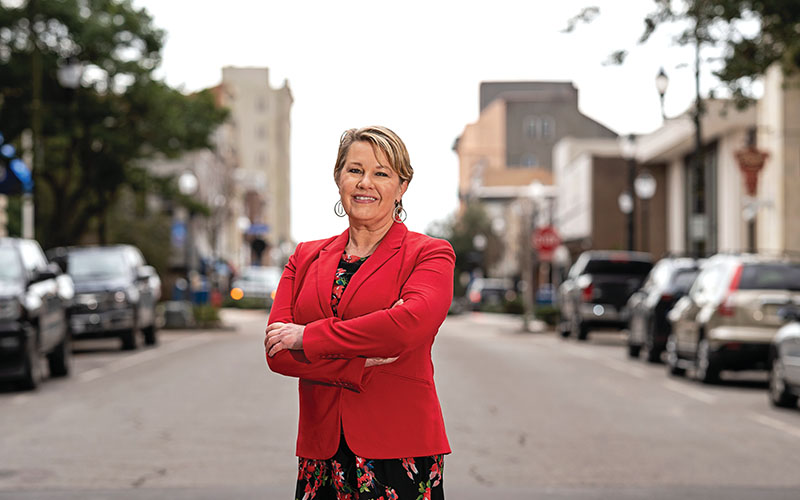 Holly Childs
In January, Holly Childs took the reins of Wilmington Downtown Inc., moving to the Port City to serve as president and CEO of the group that runs point on economic development for the district.

Childs, who has a background in commercial real estate and public sector economic development, said she wants to focus on those areas in her new role.

Below is an excerpt from a recent conversation about Childs’ outlook on downtown.

The group has been pretty vocal about supporting Project Grace, the public-private plan between New Hanover County and Zimmer Development Co., to turn the block around Grace and Third Streets into a mixed-use development. Why was that one of the first things you tackled in your new role?
“Our mission at Wilmington Downtown Inc. (WDI) is ‘to promote the economic growth and development of downtown Wilmington,’ and the redevelopment of this block is absolutely critical to that mission – so it needed to be one of my top priorities.

The block is currently a tired and blighted 3 acres right in the heart of our downtown that is owned by New Hanover County. It contains the main library, which is a woefully inadequate facility relative to modern downtown libraries in our competitive set of cities (e.g., Charlotte, Charleston, Savannah) and even in our own county (Pine Valley). … We also think it makes perfect sense to create a vibrant civic and arts block with the co-location of both the library and the Cape Fear Museum as part of Project Grace, in order to allow for the museum to accommodate top-notch exhibits.”

What are three of your top priorities for WDI?
“Our top three priorities currently as an organization are to expand, initiate and partner.

We want to expand our role in downtown so that people think of WDI as more of an economic development engine for downtown and not as just an events-focused organization.

We also want to expand the definition of ‘downtown Wilmington’ to not be limited to the Central Business District, but to include other established districts in the city (e.g., Castle Street Antiques District, the Brooklyn Arts District) as well as emerging districts (e.g., South Front District, Cargo District, Soda Pop District).

WDI wants to be known as a group that drives game-changing projects and initiatives like Project Grace, a downtown grocery store and the expansion of the Port City Trolley and creates opportunities for new jobs, residents and investments into our downtown.

We also want to become a trusted partner to other organizations that are doing impactful work in our city and region, such as Genesis Block, Downtown Business Alliance, UNCW’s Center for Innovation and Entrepreneurship, the Wilmington chamber and Wilmington Business Development.”

What role do you see WDI having with downtown businesses that struggled during the pandemic?
“Our businesses downtown – particularly our bars and restaurants – have been hit hard by the pandemic, and we know that it has been a financial challenge for them now for nearly a year.

When the pandemic hit, WDI went to work to try to find meaningful ways to help our downtown businesses financially. Our Re-3 Grant Program (Restore, Restock, Recover) of up to $3,000 per business provided temporary relief to many businesses in the early stages of COVID-19, but it became clear that we needed to look at a way to make a bigger long-term impact.

So just this month we just received approval from City Council to roll out our WDI Microloan Program for loans up to $20,000 that we are going to make available to businesses within our CBD, established business districts and emerging business districts.

Loan terms are very attractive, and our interest rate for this program is ¾ Prime, which is currently 2.44%.

Permitted uses for the loan are flexible and can even be used for up to three months of rent or mortgage payments.”