A rendering shows CenterPoint, a $250 million mixed-use project planned for Eastwood Road that would include retail, hospitality, office and residential space. (Conceptual Rendering C/O Swain & Associates and Ci Design Inc.)
This year’s news about major developments planned along Military Cutoff Road in Wilmington have brought up questions about the ways the multi-million- dollar projects might fit in with the city and the Mayfaire/Landfall submarket. How will these mixed-use proposals – especially the latest to be announced, CenterPoint – fare when it comes to who their tenants will be, how traffic will be affected and who will live there?

Wilmington Mayor Bill Saffo said when it comes to plans for CenterPoint and The Avenue, “I think they’re going to be thoroughly vetted, thoroughly evaluated. The concerns of the city staff and the City Council will be shared with those developers. The No. 1 issue that we’re going to be dealing with on those projects is going to be how we handle traffic.” 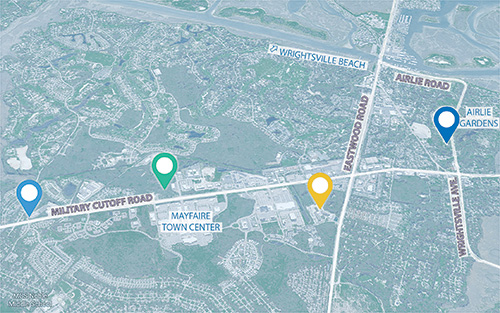 Wilmington-based Swain & Associates is planning the $250 million, 1 million-square-foot CenterPoint development on land that touches Eastwood and Military Cutoff Road, and Greensboro-based The Carroll Companies is working on The Avenue, the Westin-hotel anchored proposal expected to cost $200 million.

But developers also have to mitigate the impact their developments are expected to have, including environmental impacts – such as stormwater management and replanting trees – as well as traffic, he said. 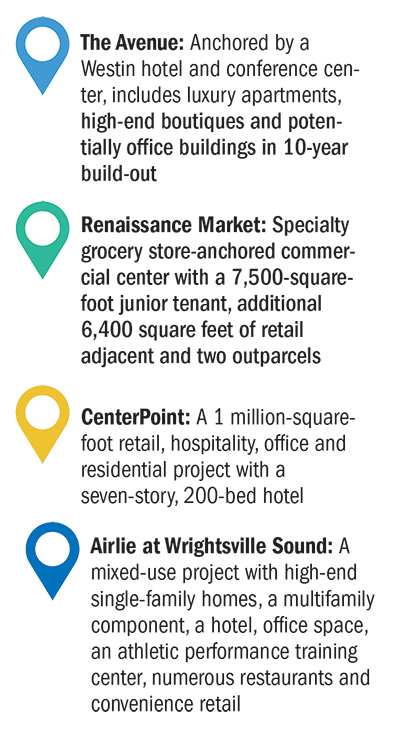 According to a news release, one of the hallmarks of CenterPoint’s design is its proximity to the potential extension of Drysdale Drive, a new, four-lane road with a median that is one of two designs being considered by the NCDOT to alleviate traffic congestion at the existing Military and Eastwood intersection.

The release said the Drysdale Drive extension would connect Military Cutoff and Eastwood roads and is an alternative to an elevated highway over the intersection. An elevated highway, said David Swain, owner of Swain & Associates, would cost considerably more and would take longer to construct.

Right-of-way acquisition for whichever project occurs at Military and Eastwood is scheduled to begin in June 2019, making it available for bids in September 2021.
Preliminary estimates for the two options, which don’t include right-of-way acquisitions or utility costs, are more than $28 million for a design that doesn’t support the Drysdale extension, while the estimate for the option that does support it is $8.7 million, according to the NCDOT.

A rezoning request for CenterPoint, to change the property’s designation from residential to Urban Mixed Use, is expected to go to the Wilmington Planning
Commission in September and the Wilmington City Council in October.

Swain said he expects the NCDOT to make a decision on the Drysdale Drive extension by the end of the year, with two more years to come before a groundbreaking on the construction of the new roadway.

“We’re really two years out before you’re going to see any dirt being turned there,” Swain said.

It could be another eight years from the time his team breaks ground on CenterPoint to when the last building is complete.

“Now that doesn’t mean that we might not be able to get it done in five years, but I’m trying to be a realist,” Swain said. If the Drysdale Drive extension doesn’t get done, “then we’re going to have to rethink how we can best get people in and around and about. It wouldn’t be a deal-breaker, no, but it’s going to cause me some pause to make sure my design is exactly like it should be,” Swain said. “This is a piece of property that’s going to be developed. There’s just no doubt
about it.”

Although thousands of stores are closing nationwide in what Forbes Magazine has dubbed a “retail apocalypse” that started last year, those who invest in retail and study the sector say using the word “apocalypse” is an exaggeration.

“There’s a lot of negativity out there today, but we think it’s very overblown and that there’s a bright future for retail. The world has changed because of online shopping, and now what retailers are doing is they’re providing the customer with a choice between stores and online. The successful retailer has to be good at both,” said Stephen Lebovitz, CEO of CBL & Associates Properties, the firm that owns Mayfaire Town Center on Military Cutoff Road and more than 75 other regional malls and open-air shopping centers.

CBL, which also manages Mayfaire Community Center, is one of the largest owners and developers of malls and shopping centers in the United States.

“What we’ve been doing is adjusting the tenant mix at our properties to add more entertainment, to add fitness centers, to add more restaurants and other uses where the business isn’t done as much online. It’s more of a social and physical experience,” Lebovitz said.

At Mayfaire Town Center, a couple of large, vacant restaurant buildings have posed a challenge when it comes to finding new permanent tenants for them, although they’ve been filled in recent years by film crews and for temporary users.

“It’s been more of a struggle than we expected,” Lebovitz said, but CBL has “a number of groups we’re negotiating with” and has looked at the possibility of splitting the buildings up for multiple users.

The entertainment factor will be critical at CenterPoint, Swain said. About the project’s 50 to 60 potential retail and restaurant tenants, Swain likened it to the kind of mix seen at The Forum, the shopping center his firm developed and built in 1998.

“I’m looking for a business that has unique items that you don’t find in department stores, and the person that walks into the front door of my retailers say, ‘What’s the latest, what’s the greatest, what have you got that’s really different?’ not ‘What’s on sale?’” Swain said. “The customer that shops me doesn’t really need anything but wants to come in. Maybe they’re just going to browse; maybe they don’t buy anything but they get a warm and fuzzy feeling.

“I’m looking for warm and fuzzy feelings in my developments.”

As for what can create those, Swain said, “unique retailers. Restaurants – everybody loves a restaurant ... I want to go to a restaurant where maybe I can sit outside under an umbrella and have a glass of wine … I want to go over there just for the fun of it, and the people that live in my apartments will be that kind of person.”

The types of retailers Swain referred to are also often smaller than big-box stores.

“At The Forum, I’ve got mom-and- pops that are really good. I’ve got people that are in 1,500 to 3,000 square feet, and we’ve got the restaurants. That’s what I’m looking for. That’s what I’m going to put over there [in CenterPoint] … that doesn’t mean I’m not going to have some nationals.”

At the Pointe at Barclay, a movie theater-anchored dining and entertainment complex at South 17th Street and Independence Boulevard in midtown Wilmington, the tenants are seemingly “internet-proof,” said Hill Rogers, broker in charge of Cameron Management, which along with Charlotte retail firm Collett, is developing the center.

“I think retail in general is all in a pullback mode everywhere,” Rogers said. “There’s always room for the right great operator, but everybody wants to make their footprint as efficient as possible and reduce their square footage.”

There are also some retailers that have locations in other North Carolina cities that might consider the Port City now or in the future, said Steve Mitchell, commercial real estate broker with Coldwell Banker Commercial Sun Coast.

“Wilmington is a tertiary market so there are retailers that have come to Raleigh and other major areas – Charlotte, maybe even Winston-Salem and Greensboro – that haven’t quite made it here yet, so there’s some opportunities there,” Mitchell said.

Tracy Meyer, professor in the marketing department at University of North Carolina Wilmington’s Cameron School of Business, said some retailers are expanding, including brands not currently operating here.

“They’d be great new additions in a retail complex in Wilmington, something fresh and different and exciting,” she said. “You can be successful in retail at the brick-and-mortar level; I think it’s just a matter of finding those companies that are growing and they’re doing something a little different and it works.”

Grocery stores have been a retail segment in growth mode in Wilmington in the case of several chains. 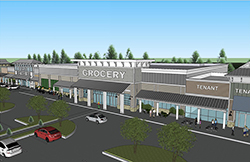 aissance Market (left), across from Mayfaire Town Center at the corner of Military Cutoff Road and Sir Tyler Drive, will be anchored by a specialty grocery store that’s new to Wilmington. The store, which had not been named as of press time, focuses on organic and natural food.

For Raiford Trask III, whose firm Trask Land Company has partnered with Harbour Retail Partners on Renaissance Market, the address of the new center will be key to attracting retailers. Swain and The Avenue developer Roy Carroll, CEO of the Carroll Companies, feel the same way about their locations.

“Location still matters,” Trask said. “In an ever-changing [retail] environment, it is the most important thing.”

CenterPoint is expected to include 300 high-end apartments “but they will be affordable for our community,” Swain said.

“There’s a lot of great multi-family around here, but every time somebody builds one, somebody else comes with an idea of how to make it a little better. So that’s what we’re trying to do, make it better,” he said.

There’s a demand for the product, Swain said. Those who want to live in apartments, especially millennials (the generation born in the early 1980s through about 2004), want to live close to where they work and play, he said.

“They can live here and have everything they need to sustain their lifestyle within a certain area,” Swain said.

The Avenue could include more than 500 luxury apartments, situated above high-end boutiques, according to preliminary plans.

“We have turned away big box-type retailers for the shops on the lower level of the residential units,” Carroll said.

There have been 36 apartment projects with 4,985 units delivered and absorbed by the Wilmington market since the beginning of 2013, yet the occupancy is higher today than it was in 2013, said Richard Cotton, managing director of Multifamily Realty Advisors who compiles market reports about the Wilmington and Triangle apartment markets. Cotton is also a commercial broker who specializes in the sale of apartment communities and apartment development sites.

Six projects with 884 units are currently under construction, the lowest level in several years, Cotton said. He said there are 16 projects with 3,158 units proposed, but five of them require rezonings.

“It is difficult to estimate how many of the proposed projects will ever get built, but I am not at all concerned about this market becoming overbuilt any time soon,” he said.

As in retail and most areas of real estate, the apartment location makes a difference.

“Demand is extremely high for apartments in mixed-use developments where people can walk to restaurants and stores,” Cotton said. “In the Triangle, for example, the most upscale apartments with the highest rents are generally the most ‘walkable’ sites close to shops and restaurants – such as Glenwood South in downtown Raleigh and the Ninth Street District in Durham and suburban areas like Crabtree Valley and North Hills.”