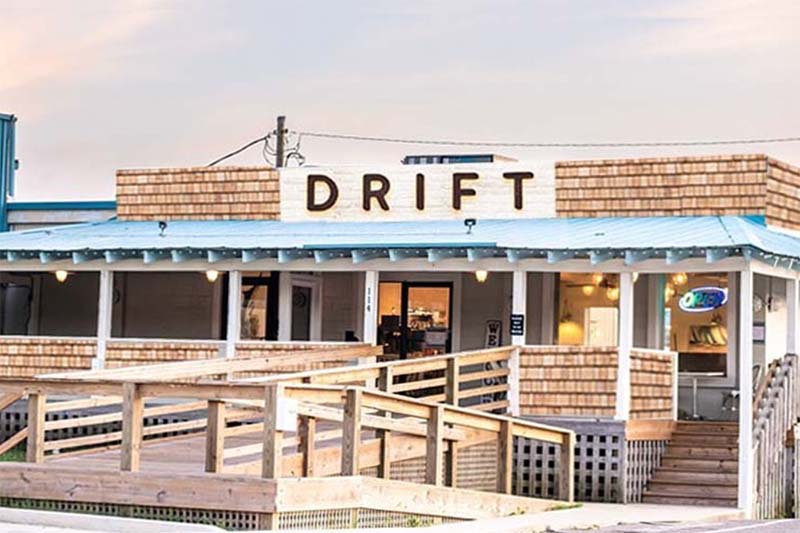 Drift Coffee & Kitchen announced it plans to take over the spot previously occupied by Gulfstream Restaurant, the long-time home of the former Causeway Café. (Photo courtesy of Drift Coffee & Kitchen)
A well-known Wrightsville Beach restaurant location is in the midst of its second recent transformation. The iconic building that was home to Causeway Café from 1987 to 2018 could house a new tenant as soon as April.

Ben and Michael Powell, owners of Drift Coffee & Kitchen, will be expanding into the location, the brothers announced recently on Facebook. Drift will replace Gulfstream Restaurant in the space.

At the end of February, Gulfstream’s co-owner Ed Thomas announced that the Wrightsville Beach restaurant – sister to Gulfstream Restaurant in Carolina Beach – was closing after a difficult couple of years. In the late summer of 2019, Hurricane Dorian staged a welcoming party for the newly opened restaurant and the area’s post-hurricane recovery activity depressed tourism in the fall. The new year, 2020, brought its own set of problems.

“It has been our sincere pleasure to serve you,” the Gulfstream owners wrote in a Feb. 28 post. “Unfortunately, nearly as soon as we had gotten this new location off the ground, we were faced with really tough choices brought on by the pandemic and exacerbated by the labor shortage.”

The decision to consolidate Gulfstream to the original and ongoing Carolina Beach location is “bittersweet,” according to the post. “Transforming the old Causeway Café into a shiny new Gulfstream was truly a labor of love. We appreciated the opportunity and how warmly we were welcomed by the Wrightsville Beach community.”

A week after Gulfstream’s farewell post came the announcement from the Powells.

“We promised you big news today and here it is: Wrightsville Beach here we come!” read Drift’s Facebook post on March 5. “We couldn't be more stoked about opening our newest cafe on 114 Causeway Drive, once home to the legendary Causeway Café.”

Drift’s owners added that they are not ready to announce the new location’s grand opening dates but are recruiting staff for the new spot. They’re hosting a hiring open call Thursday from 10 a.m. to 2 p.m. at the restaurant and have openings for servers, kitchen team members, baristas, porters/bussing staff and a kitchen manager.

Launched with a café in Ocean Isle Beach in 2014, Drift expanded to Wilmington in 2017 with a location at Autumn Hall. Two years later a second Drift opened in Mayfaire Towne Center.