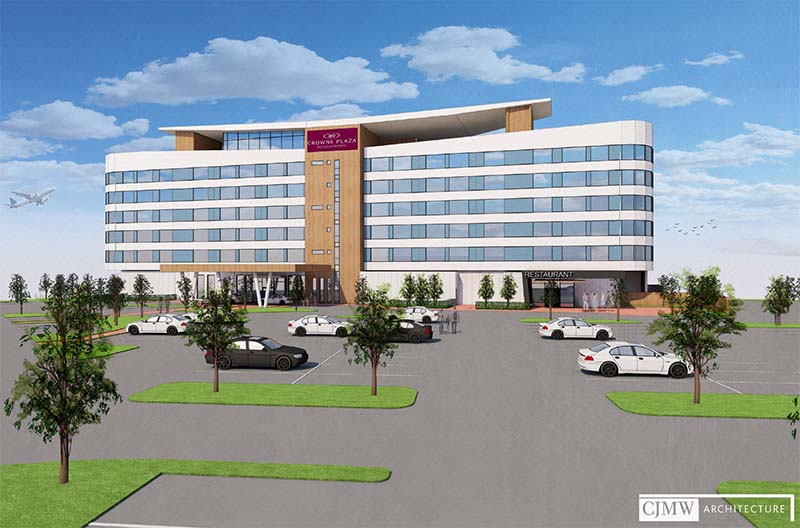 Renderings of the Crowne Plaza Wilmington International Airport, a six-story hotel planned next to the ILM terminal, show a luxury development with rounded corners – a feature unique to the Wilmington brand. (Photo courtesy of ILM Airport Hotel Partners)

An investment and development group is planning a six-story Crowne Plaza hotel at the Wilmington International Airport, intending to spend $40 million to make the project a reality.

The group is partnering with the U.K.-based IHG Hotels & Resorts, an international brand with more than 6,600 hotels.

The 140-room hotel will be constructed in two years, the developers revealed at a press conference Thursday afternoon. “We are getting a hotel at ILM finally!” airport authority member and county chairwoman Julia Olson-Boseman exclaimed at the press conference. “I can’t tell you how exciting it is to finally see these plans come to fruition.”

Development of the Crowne Plaza Wilmington International Airport will create 150 jobs during the construction phase, with 125 jobs remaining permanently, according to the group’s plans.

The luxury hotel will include two restaurants, one casual American-themed option on the ground floor and an “exciting and eclectic” upscale restaurant on the top floor along with a rooftop bar, according to the developers.

The hotel will be located on a 4.7-acre tract off ILM’s main entrance on Airport Boulevard, adjacent to the terminal campus, which just underwent a multi-year expansion.

Development partners Chip and Andrew Weiss said they were looking for an opportunity in the Southeast before landing on Wilmington. “We wanted to go where we were wanted,” Andrew Weiss said. The brothers, based out of New York, were seeking an area that wasn’t too early or late in its growth phase. When they were received positively by airport officials after they first pitched their plan, Weiss said they moved ahead with their preliminary investments.

A lack of quality hotels in or around the airport also helped shape the decision. Over the past several months, the team has stayed in several hotels around the Wilmington area, taking notes and scoping out their future competition.

IHG Hotels & Resorts owns several recognizable brands in addition to Crowne Plaza, including the Holiday Inn, InterContinental, Regent, Hotel Indigo and more. “Crowne Plaza has a successful legacy of hotels operating at airport locations and we expect to do the same here in the Wilmington market,” said Ginger Taggart, vice president of the Crowne Plaza brand marketing for IHG Hotels & Resorts.

The Wilmington project will be IHG’s fourth partnership with the Weisses and join the more than 400 Crowne Plazas across the globe.

In addition to landing a long-coveted hotel, Wednesday's signed lease marks yet another recent win for airport officials at the growing ILM Business Park. Last month, CIL Capital signed its second lease at the park, following up on demand received after the real estate investment firm signed its first lease in November 2021. In all, CIL Capital is planning to invest $150 million to construct 750,000 square feet of industrial space for the life sciences industry.

Edgewater Ventures also signed a lease in November 2021 and is planning a speculative industrial project, similar to the firm's built-out first phase of the Wilmington Trade Center on U.S. 421. Circle K, another new business park tenant, opened last year at the airport's entrance.

Airport officials are in the midst of studying assets at the business park to strategically fill out the remaining acreage, which is about half full.