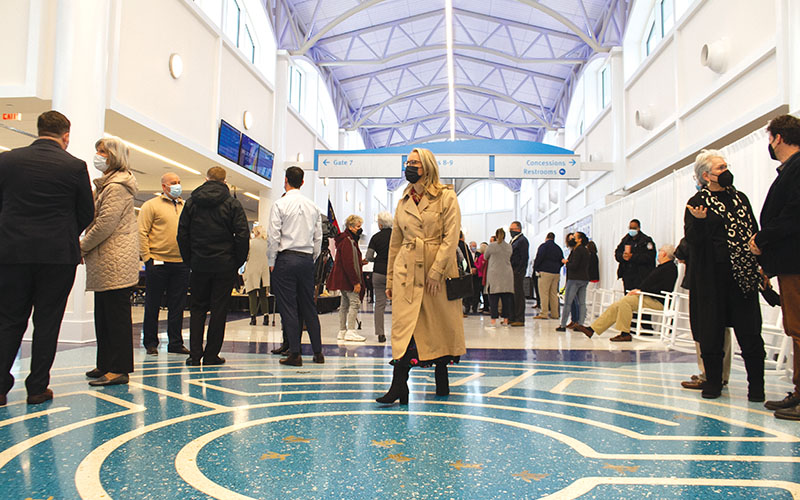 Wilmington International Airport earlier this month invited community members to its newly expanded terminal. The space opened to passengers Feb. 8. (Photo by Johanna F. Still)
After nearly a decade of planning, the Wilmington International Airport christened the largest and most visible component of its multi-year, three-phase expansion earlier this month with the opening of its expanded concourse.

A lengthened 77,600-square-foot terminal section introduced three new gates at the Wilmington airport, the fifth-largest in the state when accounting for passenger traffic, according to pre-pandemic federal data.

By increasing the airport’s overall space by 75%, the expansion has created room for Wilmington International Airport (ILM) to cater to 50% more passengers, officials said. The discrepancy in the space versus the passenger capacity bump derives from differing design standards from the original terminal, built in 1989, compared to this month’s expansion, for which planning began in 2013 as part of a terminal capacity study.

In 2019 – ILM’s banner year – the airport saw more than one million passengers move through its then-six gates. At the time, the airport was operating at full capacity.

When “it’s busy, it’s shoulder- to-shoulder space,” said Granseur Dick, ILM’s facilities director. Pre-pandemic, he said he would have considered ILM behind in planning for growth; now, “we are on pace.”

COVID-19 devastated the airline industry, prompting a nearly 56% drop in year-over-year passenger traffic in 2020 at ILM. Last year, air traffic rebounded as vaccines became readily available, reaching 84% of pre-pandemic travel for the entire year, according to year-end passenger totals, and 94% of 2019 numbers between July and December 2021, according to data collected by the airport’s consultant.

ILM’s 2021 rebound as a percentage of pre-pandemic traffic outpaced the national and state average, the data shows.

“With the pandemic, we’re still busting at the seams, but we’re essentially at capacity,” Dick said. “So this is happening at the right time.” Crafted by Monteith Construction, the expanded concourse features a sleek, modern design with vaulted ceilings and local art.

At $56.4 million, this phase was the most expensive portion of ILM’s $68 million overall price tag for its latest additions and upgrade work. Earlier phases included an expanded ticket lobby, counters and offices and an improved TSA baggage handling system.

A new restaurant is expected to open in April, and work on a recent project add-on to renovate and extend the baggage claim area is expected to wrap in summer 2023.

In addition to the three new gates, the expansion plans also include a new passenger boarding bridge, replacing the oldest one at the terminal, which has exceeded its useful life, according to Dick.

With the new space open, crews will soon begin renovating the old terminal area “gate by gate,” expected to finish by the end of the year, Dick said.

ILM can accommodate an estimated 500,000 more passengers a year with the added space, according to Dick. How and when it gets there is up in the air.

Today, AVL has 24, and ILM has nine nonstop routes, according to officials with both airports. Even though AVL serves more passengers and has nearly three times as many nonstop routes, ILM contributes to a greater number of jobs and its regional economic impact is higher, according to data in the N.C. Department of Transportation’s 2021 aviation report: ILM adds $2.2 billion in economic impact to the region while supporting 16,385 jobs; AVL adds $1.9 billion while supporting 12,520 jobs.

At present, ILM doesn’t host any low-cost carriers. Legacy carriers United, Delta and American Airlines each have established nonstop routes and tend to occupy the same gates at ILM. “They really cater to those business travelers more than a family of four or six who’s trying to travel,” Dick said.

With its newfound room, ILM is now looking to attract low-cost carriers. “Previously, we’ve not been able to offer them space,” Dick said. “Now we have space.”

“The ILM team,” airport director Jeff Bourk said, “consistently works to pull together up-to-date information on our area’s growth, business development and industry trends and shares this information with current and prospective airlines to help make the case as to why ILM should be part of the airline’s recovery and strategic growth plan, in the short and long term.”

In the spring, the New Hanover County Airport Authority will consider acquiring the IT to implement a common-use system, technology that allows carriers to peer into schedules to book periodic flights at a shared gate. “They may be here just once a day,” Dick said. “So while they’re not here, why not let another airline come in and borrow that gate?”

Leisure travelers tend to look for lower-cost options compared to business traffic, according to Gary Broughton, who was ILM’s interim director for nearly six months before retiring in December.

Lower-cost flights to the same destination legacy carriers offer can add pressure to drop prices, which interferes with profits.

“You have to balance it,” Broughton said. If the airport can feature different destinations so the low-cost and legacy carriers don’t directly compete, “then they’re happy,” he said.

Broughton spent over three decades working for US Airways, which later merged with American Airlines, so he understands firsthand what carriers want to see before booking routes: It’s not charm – it’s stats.

Both before the pandemic and now, ILM’s traffic is about 70% business travelers. These are reliable customers, Broughton said, consistently booked by companies that are critical to ILM’s continued success.

If a carrier announces a new route at the airport, it’s an expensive decision, Broughton said.

It either means the airline purchased a new plane or is willing to move an existing one from another established route, Broughton said.

Former ILM director Jon Rosborough, who helmed the airport from 2000 to 2014, called it “robbing Peter to pay Paul.”

“It’s all driven by airlines,” Rosborough said. “Airlines are only committed to your community and to your airport if you have the numbers.”

He said he often told people who asked him what a director does: “It’s my job to fill the seats.” So how did he fill seats? “It’s an enigma,” he said.

Airlines start paying attention when there’s over 90% occupancy on every flight, he said.

All the while, airport directors charged with seat-filling elsewhere are vying to pull the same carriers with their data. “It’s a very competitive environment,” said Broughton.

Should the common-use technology prove successful, ILM could reach its new capacity benchmark of 1.5 million annual passengers before 2028, Dick said.

“If that effort opens up floodgates, if you will,” he said, “that may come a lot quicker than what our forecast models would have anticipated.”