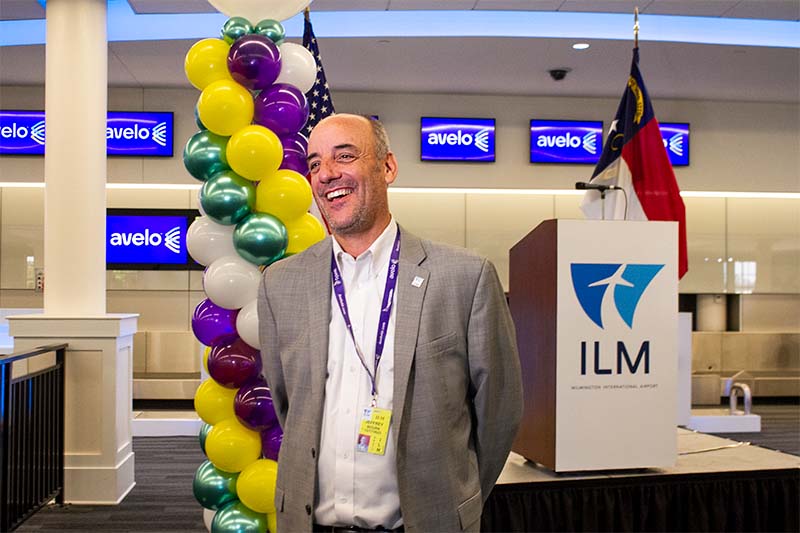 At a press conference Thursday morning at ILM, officials were jubilant while announcing the news.

Between fist pumps, officials shared that Avelo was launching two nonstop routes out of ILM to Orlando International Airport and Tweed-New Haven Airport in Connecticut – both locations previously lacking direct connections to ILM – and a seasonal route to Baltimore/Washington International Airport.

ILM has been trying to court a low-cost carrier for years. Historically, the bulk of ILM’s traffic is business travelers, which are serviced by legacy carriers American Airlines, Delta Air Lines and United.

“We haven’t been able to crack that leisure market before,” airport authority chair Donna Girardot said. Despite its temporary but brutal blow to the industry, COVID-19 gave ILM a silver lining, Girardot said. “All of a sudden, the pandemic brought us this new leisure traveler that we have been working to try and nurture and grow for years – six years or more.”

The “ultra-low-cost” airline can offer cheap flights because it utilizes larger planes, Avelo spokesperson Courtney Goff explained. “The big three” airlines – United, American and Delta – use small, “50-seater” aircraft, Goff said. Each flight into and out of ILM will utilize a 147-seat Boeing 737-700 jet.

“We have these big planes that lets us keep the cost down,” Goff said. “It allows us to sell more seats so that there's more availability in the market.”

Houston-based Avelo is a startup airline that launched last year. For its first birthday, the airline announced the ILM routes along with other East Coast stops and a third base in Orlando, in addition to its first bases at Hollywood Burbank Airport in California and in New Haven.

Bourk said he began talks to bring the service to ILM with Avelo representatives, who are industry veterans he was already familiar with through previous roles, before he officially started in his new role earlier this year.

Goff said the carrier has eight total planes, with plans to double the fleet by year’s end. A new destination out of ILM will likely be announced to fill in for the off-season once Baltimore’s routes end in the fall, Goff said.

Airline executives came to select ILM after parsing cost-effectiveness, travel trends and market dynamics, according to Goff. The market’s status as both a vacation and business destination was a draw, she said. Plus, the absence of another low-cost carrier helped cement the carrier’s decision as it makes strategic moves across the nation while avoiding direct competition.

With a few dozen travelers looking to visit D.C. daily, Avelo is offering the Baltimore flight three times a week to try to capture that demand, hoping they’ll move dates “if the price is right,” Goff said. “That kind of data is what really kind of put it over the edge,” she said.

Avelo will be ILM’s first user of a new common-use software system the airport recently implemented. ILM’s three legacy carriers occupy permanent, dedicated space at the airport’s ticket counters. The space Avelo occupies will be available to other airlines – should any choose to launch new routes in the future – when not in use. Bourk said he brought the concept with him when he arrived at ILM. “It teaches these computer systems how to talk to the airlines,” he said. “We can put two, three, four airlines in the space … This space is going to be used very efficiently.”

Common-use technology is also being incorporated into ILM’s three new gates, which opened in February as part of an expanded terminal project.

The three new routes bring ILM’s total nonstop route offering to 12. Anytime a new airline brings a new flight to a market, they spend roughly $7 million upfront, according to Girardot. The airport authority chairwoman credited the groundwork laid by new marketing partnerships between the Wilmington Chamber of Commerce, the New Hanover County Tourism and Development Authority and ILM, years of staff presentations and Bourk’s connections for landing Avelo in the market. “None of this happens overnight,” she said.