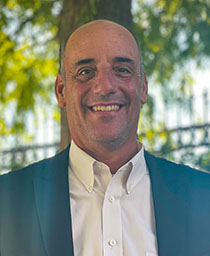 Jeffrey Bourk
The Wilmington International Airport has named Jeffrey Bourk as the new airport director, according to a press release Thursday.

The New Hanover County Airport Authority Board selected Bourk from more than 100 applications after a nationwide search.

He stood out due to his “25 years in airport business and operations management, the transformative business development initiatives he has led that have positioned airports for growth, and the way he has consistently brought new fixed base operators and new airlines to airports,” Airport Authority Chairman Donna Girardot said in the release.

The board voted on the new director at its meeting Wednesday night and approved a three-year contract with him. His tenure starts Jan. 3.

Bourk will take on the role after the authority opted out of former airport director Julie Wilsey's employment agreement. The search for a new director began in June soon after the vote on Wilsey's exit. Gary Broughton, ILM's deputy director, has filled in as interim director during the search.

Bourk comes to the head role at ILM having served as executive director of Branson Airport in Hollister, Missouri, for 14 years. During his time at the Branson Airport, Bourk helped build it from the ground up, "building its infrastructure and bringing in low-cost carriers to help make flying in and out of the area more accessible and economical," the news release stated. "The airport is one of the industry’s largest public private partnerships constructing a green field airport and has served more than one million travelers and created millions of dollars of economic benefit to the Branson Tri-Lakes region since opening in 2009."

Prior to Branson, he was assistant airport manager at Portland International Jetport for six years and worked in operations management roles for the Port Authority of New York and New Jersey at Teterboro Airport.

Bourk has a Master of Business Administration degree with a concentration in Aviation Management from Daniel Webster College, a Bachelor of Science degree from Embry-Riddle Aeronautical University and is an Accredited Airport Executive. He was a certified aircraft rescue firefighter, has his FAA private pilot certificate and is involved in numerous airport and pilot trade associations, the release stated.

“He has a strong network of industry partners and has been a private pilot for over 30 years, which will help support and advance our partnerships with the General Aviation community,” Girardot said in the release. “He has a proven track record of working with economic development partners that will help grow our business park, and he is skilled in team building and fostering a caring and motivated culture.

"The Airport Authority members all feel that Mr. Bourk’s strategic approach, new synergy, and career aviation knowledge will help ILM grow to heightened levels of excellence and we look forward to working with him,” she continued.

Bourk said in the release that he was looking forward to moving to Wilmington.

“The airport is experiencing a lot of exciting new changes, with the terminal expansion, increased activity in the business park, and the addition of several new, nonstop flights," he said. “I look forward to creating and implementing strategic air service development and business park plans ensuring ILM contributes the maximum economic impact to the region, bringing in additional flights, and ensuring our business operations align with sustainable growth to provide high-quality service for residents and visitors.”

The airport also announced on Thursday two companies are joining the ILM Business Park, bringing a combined $120 million in investment.