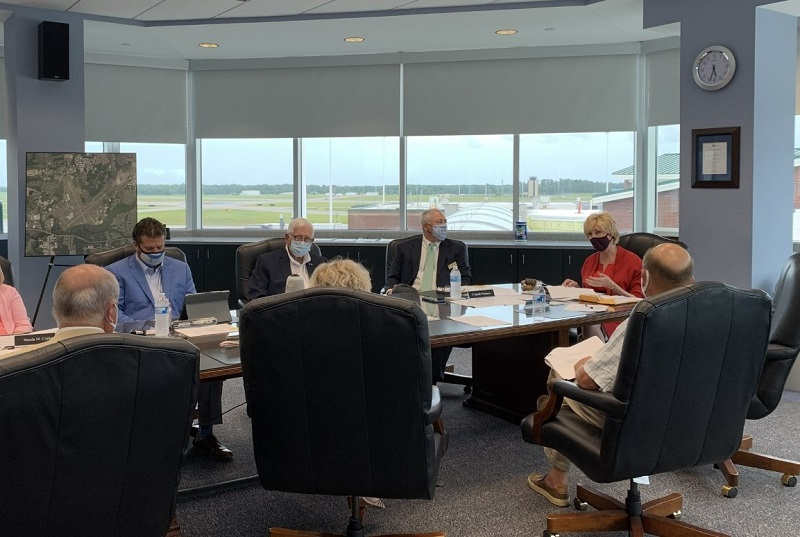 The New Hanover County Airport Authority board is moving forward with the search for a new airport director following a vote on a consulting firm Wednesday. (Photo by Christina Haley O'Neal)
The New Hanover County Airport Authority approved paying Julie Wilsey, ILM’s airport director, $315,000 in salary and benefits when she leaves her post this week.

Authority members approved the action after a short, closed session meeting between the board and its attorney on Wednesday evening at the Wilmington International Airport. That closed session was part of the authority’s regular monthly meeting.

Wilsey will no longer be in the position starting Friday, airport officials said.

“The authority will pay Julie Wilsey $315,000 in salary and benefits pursuant to her contract as of July 9, 2021. We thank Mrs. Wilsey for her service, and we wish her well,” Donna Girardot, the authority's chair, said at the meeting.

The authority unanimously voted on June 8 to opt out of Wilsey's employment agreement with 30-days notice.

Authority members at the meeting Wednesday did not discuss reasons for ending the contract with Wilsey, who has served as airport director since 2015. Wilsey has not commented since the initial vote.

According to airport records, Wilsey's salary was just over $230,400.

Now, a national search for ILM's new director will begin following several contract approvals by the authority on Wednesday.

One approval Wednesday included a contract with Gary Broughton to serve as interim airport director when Wilsey leaves her post. Broughton has been ILM’s deputy director.

Broughton's contract is effective July 9 to Dec. 31, when Broughton is slated to retire. He had previously announced he would retire Sept. 1 but extended his retirement date the week of the board's vote to end Wilsey's role as airport director.

“We are looking forward to working with ADK. They come highly recommended from our consultant and from other folks we have talked to around the aviation community,” authority board vice chairman Spruill Thompson said Wednesday.

Thompson is also chair of the airport director search committee. Authority member Thomas Wolfe and authority secretary Nick Rhodes are on the committee along with Carter Lambeth, a past authority chair, and John Lennon, an at-large member and former NCDOT aviation representative.

“The goal would be to have someone committed by October so that we could have a smooth handoff and Gary can wind down things before the end of the year knowing he’s leaving us in good hands,” Thompson said.

Thompson said the consulting firm expects that ILM will get “an excess of 40 applicants” for the director role.

“They’re going to do the background checks once we get to the select groups that we’re looking for … They will whittle it down to four, and that’s when the interview process will start, with the committee to start with and then the recommendations coming to the board,” he said.

No action has been taken by the airport authority on ILM’s deputy director replacement, Girardot said in an email Thursday.

“The Airport Authority has elected to allow the new incoming Airport Director to participate in filling this position,” she wrote.

“I’m really glad we are moving forward with an agreement with this executive search firm, because I think having a nationwide search for a new director is going to be incredibly important in helping us grow this airport into what I know it can be,” Julia Olson-Boseman, an authority member and chair of the New Hanover County Board of Commissioners, said at Wednesday’s meeting.

Correction: This story has been updated to reflect corrections made to the titles of the search committee board members.