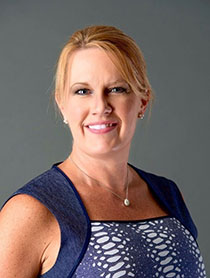 Holly Childs
Officials with Wilmington Downtown Inc. have chosen a president and CEO.

Holly Childs, whose most recent position has been with a commercial real estate company in Morgantown, West Virginia, will take the helm of WDI on Jan. 4, according to a news release Thursday.

Former WDI President and CEO Ed Wolverton stepped down this year after seven years in the roles. He started in September as head of the Uptown Columbus Inc. group in Columbus, Georgia.

Childs said one of the reasons she applied for the position in Wilmington was that she was looking for a change.

“When I came to Morgantown, I had three teenagers, and now I have an empty nest and so it was kind of just a life change time for me as well as an opportunity for me to get back …  to doing true economic development,” Childs said Wednesday. “In my role here at [the real estate firm Westridge Inc.], I do all of the business development leasing.”

Luring employers will be one of her priorities when she starts her Wilmington job, Childs said.

“What I’ve talked about with the executive committee [of WDI] is really kind of taking that next step into looking at what are some of the key economic development projects we could do downtown that WDI could really spearhead,” she said. “I think that’s really a missing link.”

Childs said that while there are a lot of great partners such as Wilmington Business Development and the Wilmington Chamber of Commerce, she and WDI can focus full time on getting new businesses in and increasing jobs and investment.

According to the release, the CEO search process led by WDI chairman Dane Scalise and past chair Colin Tarrant involved over three months “of deliberate and thoughtful work by the committee, including numerous rounds of candidate interviews and presentations. The committee’s final – and unanimous – recommendation was to bring Holly to Wilmington. WDI’s Executive Committee then interviewed with Holly and made a unanimous recommendation to the WDI Board of Directors that she be hired immediately.”

“Bringing Holly on board was a ‘no brainer’ for our organization,” Scalise said in the release. “WDI has been in the business of promoting the economic growth and development of downtown Wilmington since 1977. Holly not only understands our mission, but, more importantly, she also has the experience and knowledge to fully realize our organization’s potential as a major economic driver for our community.”