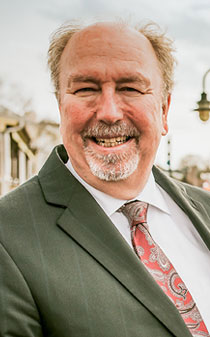 Ed Wolverton
After running Wilmington Downtown Inc. for nearly seven years, Ed Wolverton will step down as president and CEO next week.

“This was a mutually agreed-upon decision by the organization’s [executive] committee and Ed that the organization was heading in a different direction," New Hanover County Commissioner Rob Zapple, who serves on the group's executive committee, said Tuesday.

The organization, which is a public-private partnership agency that promotes the economic growth and development of downtown Wilmington, announced Wolverton's departure in a news release Monday evening.

Wolverton, who started his post with WDI in October 2013, on Tuesday did not give a reason for leaving the group, referring instead to Monday's release or Scalise.

“I appreciate the chance to help the community improve and grow," he said. "There’s been a lot of successes and I wish for the continued growth and development of the area."

Wolverton said he didn't have any future plans to share at this point.

Scalise also did not comment Tuesday about why Wolverton is leaving.

“WDI is truly grateful to Mr. Wolverton for his service to the organization and the Downtown community,” he said in the news release. “Mr. Wolverton has a very long list of successes and, without question, has helped improve Downtown for our citizens, businesses, and visitors.”

Scalise said the organization would immediately form a search committee for the next president and CEO.

“We're going to be inviting applications from folks locally, from folks at the state level, from folks outside of the state. And ultimately, we're just looking for candidates who are all-in on promoting the economic growth and development of downtown,” Scalise said Tuesday.

“I think we're going to get some good folks to come in, review some resumes, then whittle it down, [and] conduct an interview make sure that the people that we really like are agreeable to our city and county partners, as well as the other people that we work within downtown," he added. "And ultimately, I'm confident that the organization is in good hands now. And we'll be in good hands again as well, whenever we get that new person in ... who will become our president and CEO."

No interim president and CEO has been selected, Scalise said, adding that he will primarily be running as the point person on organizational needs as well for WDI’s staff. Other members of the 38-member board will also be pitching in as necessary, he added.

“We have a wonderful volunteer base, and everybody is all in on making sure everything stays the same,” Scalise said.

“This is really a positive thing for the organization, and the work that Ed has done over the last seven years has been tremendous especially with the addition of the MSD,” Zapple said Tuesday.

"Working in partnership with the city of Wilmington, New Hanover County and community organizations and leaders, his [Wolverton's] many accomplishments include launching the Municipal Service District (MSD) to make Downtown safer, friendlier and more attractive, supporting the transformational redevelopment of the former Water Street deck into the RiverPlace project, producing the Downtown Sundown Concert Series as well as coordinating several well-known Downtown projects such as the award-winning #OverFlo Hurricane Relief effort and, most recently, the Re-3 grant program," officials stated in the news release.

Downtown has grown since 2013, with over $790 million in new investment including more than 240 new businesses and 1,300 jobs, according to the release.

In the most recent fiscal year, WDI reported $240 million in new downtown investment and “over $200 million in more construction projects are in the pipeline,” it stated.

“We’ve come a long way since 2013. We’ve had a long-term strategy of adding hospitality and hotel and another long-term strategy to grow the residential base in downtown. And that is well on its way to being accomplished,” Wolverton said. “We’ve certainly made hundreds of new units open with more about to open this summer … along with the continued help and support of small businesses, hurricane relief [and] COVID relief. So, it’s a lot of work.”

On Wilmington's Pointe 14 movie theater, a Q&A about the pandemic's impact