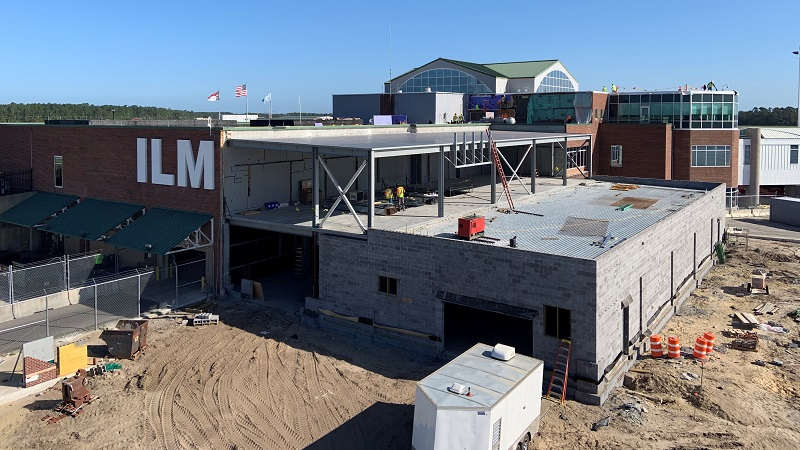 The Wilmington International Airport has reduced the scope of its airport expansion and renovation by $3 million in the last leg of the project to keep it within budget and award the final construction contract.

Monteith Construction Corp. in late August submitted a total bid for phase three work at over $52.1 million, which was higher than airport officials expected. To reduce costs, ILM shed a bid option to expand the airport's baggage claim area, valued at $5.4 million, and found $3 million in other cuts to bring the project's base bid to $43.7 million, said Granseur Dick, ILM's planning and development director.

The $43.7 million base bid, plus $2 million in additional funds for any unforeseen costs to the project, brought the total contract to nearly $46 million. That contract was delivered to Monteith Construction on Wednesday, Dick said.

Monteith Construction has now been awarded all three phases of the $60 million project. It completed the first round of the work in March and is currently constructing phase two.

The second portion of the project is about 40% complete and on schedule for completion in June, Dick said.

ILM has not set a date to begin construction on the final phase of work but anticipates the project will start soon after the new year, Dick said.

The final contract includes renovating the existing terminal and adds about 69,600 square feet of new space, according to the most recent figure. The work will build a new concourse, expand the TSA checkpoint area and add additional gates, as well as add more dining and retail space to the airport.

Dick said the airport has enough funding to begin the project with $14.4 million in secured funds, including $3.1 million from an FAA grant, $8.9 million in airport reserves and $2.4 million in passenger facility charges (PFC).

There is $33.6 million anticipated to come in through multi-year FAA Airport Improvement Program grants and seven years of future PFC revenue. The airport authority is also evaluating the potential use of a $20 million loan -- already approved by New Hanover County commissioners -- to bridge the gap between the construction project's cash flow needs and the future FAA grants, Dick said.

"Additional grants, if awarded, would free up reserves for the authority to perform other needed airfield and expansion/capacity-related projects or reduce the optional loan needs," he said.