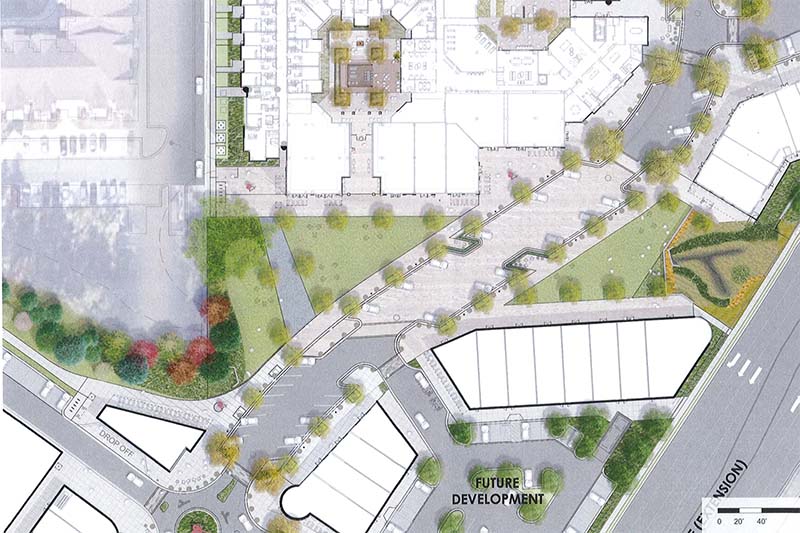 Developers behind CenterPoint are requesting to alter landscaping requirements for the large mixed-use development. (Photo courtesy of the city of Wilmington)
Driving around town, residents may have noticed a tad more public hearing notification signs than usual. The city of Wilmington’s Board of Adjustment (BOA) is reviewing eight items of new business and six items of old business at its meeting Thursday afternoon.

“It’s a pretty full agenda,” said city zoning administrator, Kathryn Thurston. “Several are old continuances that will likely be settled outside the BOA but they had to be advertised.”

Below is a rundown of a selection of the larger projects seeking city variances.

Note: The BOA meeting is currently underway and this article will later be updated with the voting outcomes:

The Beach Company and Wilmington-based Swain & Associates are planning to bring more than 350 rental homes, 100,000 square feet of retail and restaurant space, a hotel and office space to 1531 and 1541 Eastwood Road.

Developers applied for the variance in August, requesting the removal of the requirement of all foundation planting on the front and side retail building elevations facing parking lot areas. The developers propose to instead use above-ground potted plants and assert the in-ground plantings would inhibit the width of walking paths.

Biggers Market: Outdoor produce venue, Biggers Market, was cited by zoning staff with a notice of violation for allegedly inappropriately using outdoor entertainment without prior zoning approval. Parking on adjacent streets had become an issue, the citation states.

The market, which opened at 6250 Market St. in early 2021, appealed the citation in May and has objected to the allegations. Live music at the site predates new Land Development Code (LDC) amendments passed in December 2021, so the appeal asserts that outdoor entertainment at the site should be permitted as a legal nonconforming use.

At the meeting Thursday, the BOA voted to overturn the city's notice of violation 3-2.

Summerwalk: Multi-family development Summerwalk is seeking a variance to the city’s open space requirements. Located on 25 acres with entrances on Oleander Drive and Greenville Loop Road, the original development was approved in 2015 with more than 40% of the site set aside as open space.

In March, the city’s technical review committee received an application for the second phase of Summerwalk, which proposes to utilize space that was set aside as open per the first phase. Requirements of the updated LDC would require the developer to forgo an acre of commercial property “to pursue a development plan that is no longer supported by market conditions,” Summerwalk Commercial LLC asserted in its request.

City staff has requested a continuance on the item.

Middleburg Communities: The large multi-family project planned on 17th Street is seeking permission to remove eight specimen trees. In August, the city approved a 50-acre rezoning to accommodate the project, which plans to build 570 residential units among apartments, townhouses, duplexes and cottage-style units.

After developing the wooded lot, Middleburg Communities LLC plans to add more than 500 trees to the site, the developers stated in the variance request. The specimen tree removal is needed to accommodate essential site improvements, the request states.

Little Loaf Bakery and Schoolhouse: A new bakery is asking for permission to keep a sign that isn’t in line with city code. Set to open Saturday, Little Loaf Bakery replaced the former business’s sign with its own “pole sign” that is 8.5 feet high.

City code prohibits pole signs in this district and would require the bakery to convert to a 6-foot monument sign with a deeper setback to comply. The bakery owner stated the site is long and narrow with little to no flexibility for sign placement.

A former SunTrust Bank location, the applicants are seeking to turn the space at 6818 Parker Farm Drive into a restaurant and are seeking to maintain the drive-thru. The owners need a variance to operate a drive-thru within 1,500 feet of an existing residential use.

RaceTrac: A gas station brand, RaceTrac, Inc., is proposing to build a store at 605 Eastwood Road, but needs to obtain a variance to construct fuel pumps and canopies in front of the building.

If it obtains the variance, the applicants plan to rezone the property, currently zoned R-15 and office and institutional, to commercial business. The owners also seek permission to remove five specimen trees.

Skyway Investments: Applicant Skyway Investmets LLC is planning to convert a 14,400-square-foot building on the corner of Sunnyvale Drive and River Road into a construction equipment rental facility.

The owners are seeking a variance to install chainlink fencing around the property to prevent theft, vandalism, and injury and permission to not install a sidewalk on River Road, where there are no surrounding sidewalks.