For Starters: Bakery To Open With Loaves Crafted From Century-old French Sourdough Base 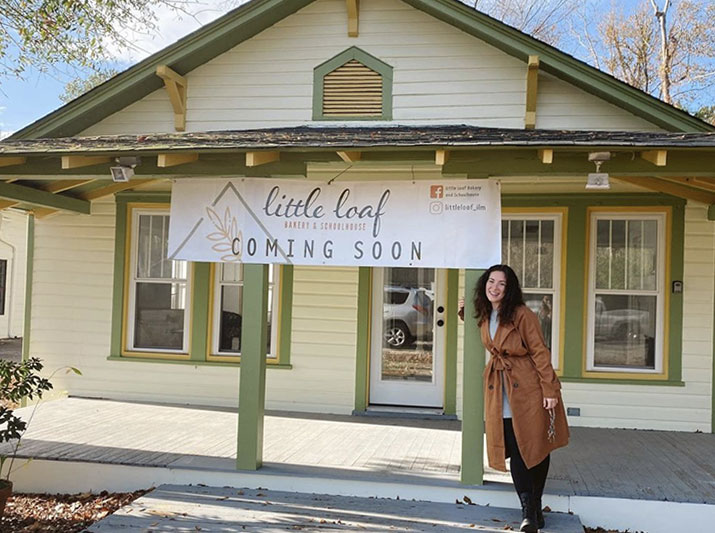 “I can’t wait for this to be a reality because it’s been such a long road,” Castellano said.

A nod to the old-world European bakes she’s sold at farmers markets since March of 2021, Castellano wanted to retain the historic charm of the 1930s-era house while converting it to a bakery with a commercial kitchen, a process that stretched out over years due to “all the hiccups” inherent in renovating an old house.

“The whole house has a little dip in it,” she said.

Working with the house’s quirks ultimately paid off, as Castellano was able to preserve the original wood floor and windows to make the space feel cozy and inviting. A courtyard in the back completes the transformation.

“It kind of feels like you’re in a European backyard,” said Castellano.

Sourdough focaccia, country sourdough and honey biscuits are among customer favorites that will be stocked at her new brick-and-mortar location along with a menu roughly double the size of what Castellano offered at markets. New offerings include a sourdough marbled rye and two sourdough baguettes, one Castellano’s riff on the classic and the other a traditional French style.

Hungry for an authentic French baguette but coming up short of a local source, Castellano traveled to France last year to hone her baguette-making prowess under a seasoned French pastry chef. As a parting gift, Castellano scored an offshoot of the baker’s 107-year-old sourdough starter, which she transported back to the United States in a small toiletry bottle in her luggage. It’s that old French starter combined with her own that forms the base of Little Loaf’s breads today.

Castellano’s foray to France is indicative of her desire to perfect her bakes, a mission she recognizes is impossible when baking bread.

“You can’t reach perfection with bread,” she said. “There’s always something you can do better.”

It’s the challenge that underpins her love of the craft. Three humble ingredients – flour, water and salt – are all a baker needs to make bread, but Castellano said she is fascinated by the ability to create endless varieties by simply changing the amounts of those ingredients or the methods used.

“Bread is the most challenging thing I’ve done in the pastry world and it’s the most unpredictable and ever-problematic,” Castellano said. “Because it’s that way, the relationship I have with it is continuous.”

A lifelong learner herself, Castellano has incorporated learning and education into her bakery by offering classes taught by her and other artisans. She plans to schedule weekly classes beginning in January.

“It’s a way to bring the community together, and a way to get people in here to learn some things that you don’t learn traditionally. We go through school and never learn how to plant things, how to make bread, how to make pastries,” Castellano said. “I want to give a chance for everybody to come and try it out.”

Little Loaf Bakery and Schoolhouse will be open Thursday through Saturday from 8 a.m. until 1 p.m. with hours slowly expanding to 7 a.m. until 3 p.m. Wednesday through Sunday.