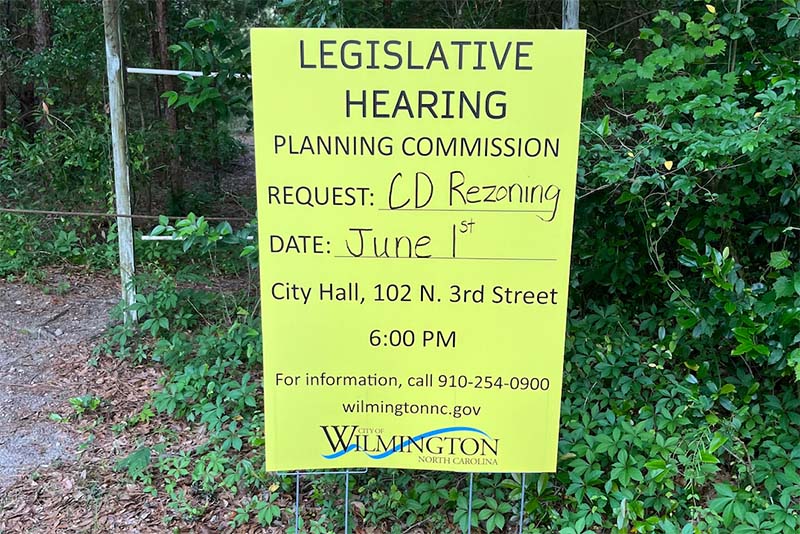 Middleburg Communities is planning to develop a large project including 570 units off 17th Street. (Photo by Cece Nunn)

Plans for a large rental community in midtown could be reviewed soon during an upcoming Wilmington Planning Commission meeting.

Middleburg Communities hopes to develop ​​The Hamlet at Barclay West on about 50 acres of undeveloped land at 3152 S. 17th Street. The two parcels are owned by Graham-Cameron AG & Timber Company LLC.

The developers are hoping to rezone the land from office and institutional to medium- and high-density multiple-dwelling residential conditional districts.

With 570 planned units combined, the project will feature a mix of cottage-style units, duplexes, townhouses and apartments. All units will be for rent, which will help address the region's housing shortage, the company stated in its application, "particularly in the middle housing market and the single-family housing rental market."

The apartment portion of the development will feature three buildings totaling 290 units, including a club, with an entrance on 17th Street. The proposed medium-density portion includes 14 duplexes, 170 cottages and 96 townhouses.

The land was first zoned office and institutional as part of the zoning approved for Barclay West in 2013; a portion of that property was eventually developed into The Pointe at Barclay.

The development company recently developed Mosby at Riverlights, a 250-unit project sold in October 2021 for $63.8 million and renamed Oasis at Riverlights.

Middleburg Communities is under contract to purchase both parcels for the planned project, subject to the rezoning, according to spokesperson Karen Widmayer. The single-family rental parcel will be purchased by Middleburg and the multi-family parcel will be a joint venture with Graham Cameron Land, Widmayer said.

“Given the limited amount of vacant infill land available, particularly with direct access to major roadways, an increase in density in this particular location is appropriate and consist[s] with many of the City of Wilmington’s planning goals and policies,” Middleburg’s rezoning application states.

The development team anticipates no negative impact on the surrounding area, according to the application. Based on feedback from neighbors in Hanover Heights, developers will incorporate a 60-foot buffer and build a fence between the single-family portion and the existing subdivision.

According to the city's website, the Wilmington Planning Commission is tentatively scheduled to review the application at its June 1 meeting.