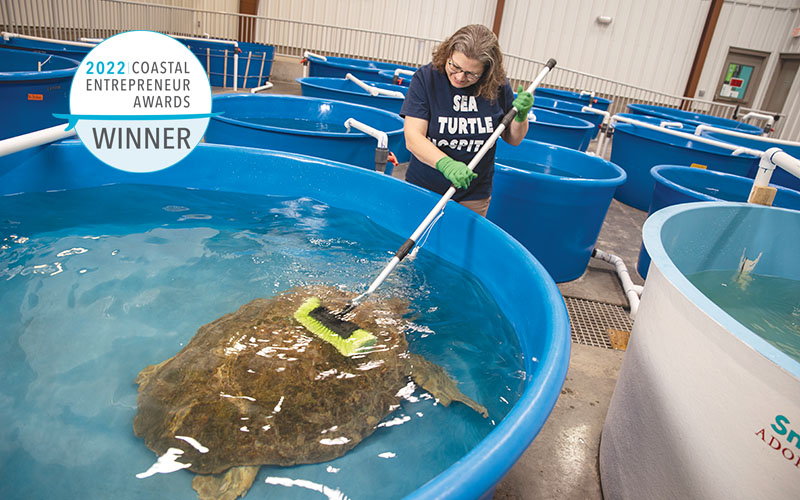 Ideally, all of the 31 turtles residing at the center as of April this year could be released back into the ocean after recovering from various ailments, but Lennie, a Kemp’s ridley turtle, can’t be released because she’s blind and can’t survive on her own.

In a way, Lennie represents the direction center officials want the organization to go. A small part of its strategic growth plan includes the potential to provide more permanent spots for turtles that wouldn’t survive back in the wild.

“Our expansion plans are to add a larger educational area and possibly some tanks for turtles that aren’t releasable because there really aren’t enough homes in aquariums or zoos across the country for turtles,” said Kathy Zagzebski, executive director of the center.

That’s especially true for big turtles like the 310-pound loggerhead currently at the center that’s suffering from a buoyancy disorder.

“It’s been really tough to find placement for her,” Zagzebski said.

Overall, the sea turtle organization is in a state of transition.

The nonprofit started as a grassroots sea turtle protection effort by Karen Beasley, who died from leukemia in 1991 at the age of 29. The organization was then guided by her mother, Jean Beasley. In 2013, the center moved from Topsail to a new 13,000-square-foot facility in Surf City.

Jean Beasley, who was the first executive director of both the nesting program and the rehabilitation center, continues to serve as board member emerita.

Zagzebski, hired last year, is the sea turtle organization’s first paid full-time executive director. One full-time employee and one part-time contractor were hired this year. The aim is to support volunteers, not replace them, Zagzebski said.

“We’ve designed a course of moderate but limited growth, still relying heavily on volunteers who are involved on every level of the organization,” she said.

Pursuing a plan of slow and steady growth allows the Karen Beasley organization “to be able to better serve the turtles here in North Carolina. We plan on adding about two to three staff positions a year over the next three years.”

In addition to building a new educational facility, future plans include finding ways “to increase our impact with students and young people through our internship program,” Zagzebski said. “We have an innovative internship program in that students actually get very hands-on unlike many other organizations, where you’re kind of stuck filing or observing.”

She said she believes the Karen Beasley organization fits the mold of entrepreneurship because Karen and her mother saw a need that needed to be filled.

The need is evident in the turtle’s stories. Zagzebski said, “Lennie was named after a wonderful, caring fisherman who found her floating and brought her to us.”