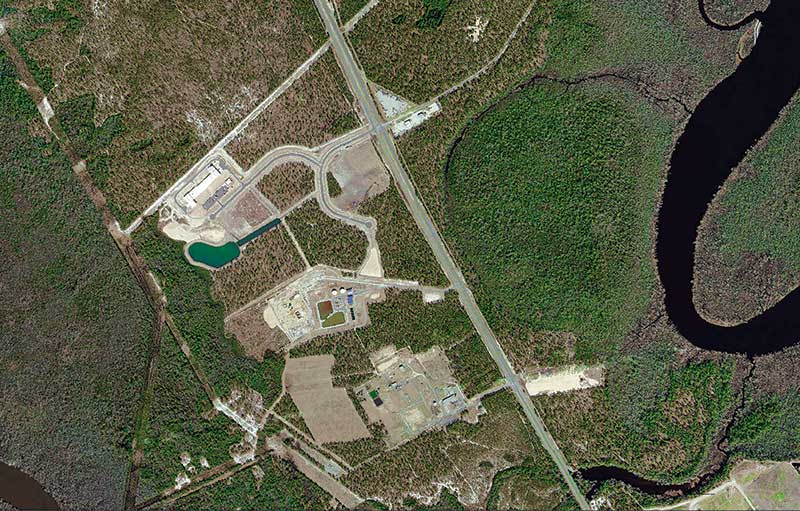 A firm with deep ties to Amazon has terminated its offer to purchase 150 acres from Pender County in the Pender Commerce Park. (File photo)

An industrial development firm that frequently partners with Amazon on large warehouse developments in the Southeast has canceled its purchase offer for more land in the Pender Commerce Park.

Through its real estate law firm, the Atlanta-based Seefried Industrial Properties notified Pender County on April 22 of its decision to terminate a contract to purchase about 150 acres of county-owned undeveloped land.

“We regret not being able to proceed with the acquisition of the Property at this time,” Seefried’s representative wrote in its notice to Pender County manager Chad McEwen. The company first entered into the contract with the county in October 2021.

It is unclear whether the cancellation will have any effect on a separate, smaller-scale deal involving Amazon at the Pender Commerce Park.

Seefried’s decision could be part of a nationwide real estate contraction on Amazon’s part, as the company reevaluates its excess warehouse space after a liberal expansion spree, officials recently disclosed. Neither Seefried nor Amazon returned a request to comment.

Last week in its first-quarter earnings call, Amazon executives revealed the company had “excess capacity in our fulfillment and transportation network” prompted by unprecedented demand during the pandemic. “We built toward the high end of a very volatile demand outlook,” chief financial officer Brian Olsavsky said, according to a transcript of the call. “We've brought down our build expectations.”

The Pender County property was planned to be the site of an undisclosed economic development project that would create 1,000 new full-time jobs paying an average salary of $31,200, according to grant approval documents. When the smaller Amazon deal first made headlines, Wilmington Mayor Bill Saffo publicly referred to a larger 1,000-job Amazon project underway, but later walked back his remarks, stating he was not privy to the project's details.

In December, Pender County was approved for a $500,000 grant from the Golden Leaf Foundation for remediation work required to prepare the property for the undisclosed economic development project. Funds were to offset the county’s costs expended removing old buildings and dormant infrastructure on the property, home to the former BASF vitamin plant that closed in 2009.

A Golden Leaf spokesperson previously told the Business Journal that Pender’s grant was the largest amount the nonprofit had awarded through its Open Grants Program, which increased its cap last year. Remediation work performed by R&R Environmental recently wrapped at the site, which includes a 70-acre portion of land located in New Hanover County but owned by Pender County. R&R has been paid nearly $1.28 million for the completed remediation work, according to McEwen.

Golden Leaf has not yet distributed any funds to the county for the project, according to nonprofit spokesperson Jenny Tinklepaugh. Asked if the project failing to come to fruition as presented would impact the county’s grant award, Tinklepaugh said, “When we have major changes to projects, our practice is to bring the information to our board to determine how to respond based on the details of the situation.”

Referred to as “Project C” in grant documents, the venture would have resulted in $400 million in real and personal property investments and called for $4 million in public infrastructure improvements, including enhancements to U.S. 421.

The N.C. Department of Transportation considered plans to install roadway improvements to benefit the “Tuna and Whale Project,” per meeting documents last month; state economic development funds would cover $4 million toward the project and the county would pay for any excess costs. This roadwork included a target achievement date of Aug. 31, per the grant documents.

Per a timeline the county submitted to Golden Leaf, the “end user” was expected to close on the BASF property last month, begin construction on an 825,000-square-foot facility in June and occupy the building by November.

Though a string of roughly 150,000-square-foot industrial warehouse projects has been speculatively developed in the region in recent years – bringing the first new industrial space to the market in over a decade – the region hasn’t seen an industrial project reach Project C’s physical scale in recent memory.

Despite the contract cancellation, McEwen said Project C is considered an “active” economic development project. McEwen could not provide further comment to explain how.

As for the other project tied to Seefried nearby: On March 17, the economic development agency Wilmington Business Development (WBD) announced that Amazon had plans to construct a 142,000-square-foot distribution center at the Pender Commerce Park. Amazon would hire 100 full-time workers by 2023, per the announcement.

In February, Seefried and Pender County submitted documents to recombine two parcels in the park into one 54-acre unit, fronting U.S. 421. Amazon.com Services LLC purchased the property on March 14, according to county records.

Update: This article has been updated to include additional land record information.