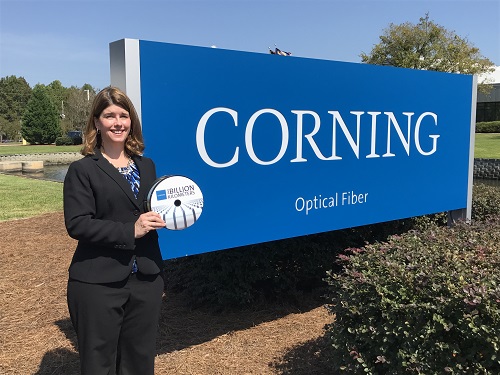 Company officials cited the advancement of technology and increasing consumer demand for faster access to information as the reason for the company's growth in fiber optics.

"As we continue to want to consume large amounts of information -- whether through our smartphones, our televisions, Netflix -- the amount of fiber needed to help enable a 4G proliferation and the movement to a 5G standard, it's going to require optical fiber to help that," Wilmington Plant Manager Michele Holbrook said Thursday.

A single optical fiber connection is capable of transmitting 20 terabits of data per second, enough carrying capacity to be able to simultaneously download 4 million HD videos, which exceeds the 3G capabilities of copper cabling, Holbrook said.

And according to Corning officials, that capacity is growing.

"Optical fiber is the only medium capable of 20 terabits-per-second data transmission. We are limited by all of the network and the infrastructure, but it continues to build out,” Holbrook said.

In April, Corning officials announced a major deal with Verizon, in which Verizon committed to purchase at least $1.05 billion in optical fiber and associated solutions from Corning as the cell phone provider moves to a 5G supported network and other new services.

Corning invented the first low-loss optical fiber at its Wilmington plant in 1970, which the company said, “helped launch the age of optical communications and ultimately transformed the way the world creates, shares and consumes information.”

Since that time, Corning optical fiber has been deployed in hundreds of thousands of networks across the globe, from long-haul and submarine networks to access networks and data centers, officials said.

“Over the decades we have been able to continuously improve our products and develop and build the suite of products that we offer, so that we can provide products to our customers that are able to allow them to connect and to use data from the desktop, all the way into ocean applications,” Holbrook said.

“The invention of optical fiber ushered in a communications revolution,” Wendell Weeks, Corning’s chairman, CEO and president, said in the release. “This life-changing innovation began with a group of people who had the audacity to believe it was possible to transmit a beam of light down a hair-thin strand of silica with minimal signal loss. Yet in 1970, I don’t think even our most visionary scientist could have imagined the speed or carrying capacity of today’s fiber – or that Corning would one day be celebrating delivering its 1 billionth kilometer."

“Today, we continue to transform the way the world connects with ongoing fiber innovations and end-to-end optical solutions. In fact, I believe we’re just getting started,” Weeks added.

"Having this plant and the assets here and the products that we produce, are continuing to build out that backbone of optical communications that is critical to being able to enable the continued expansion of the 4G network and the movement to the 5G standard," Holbrook said.

"We continue to advance our product to be able to continuously lower attenuation -- which is even lower signal loss -- so information can be carried even further, as well as improved the bend capabilities so fiber can more easily be installed … as we're continuing to get optical fiber deeper and deeper into the network, so that people in their individual dwelling places can have that fast access to the data that we are now all craving."

It took 47 years to produce a billion kilometers, but Holbrook said she was "confident it will take far less than 47 years to get to the next billion."