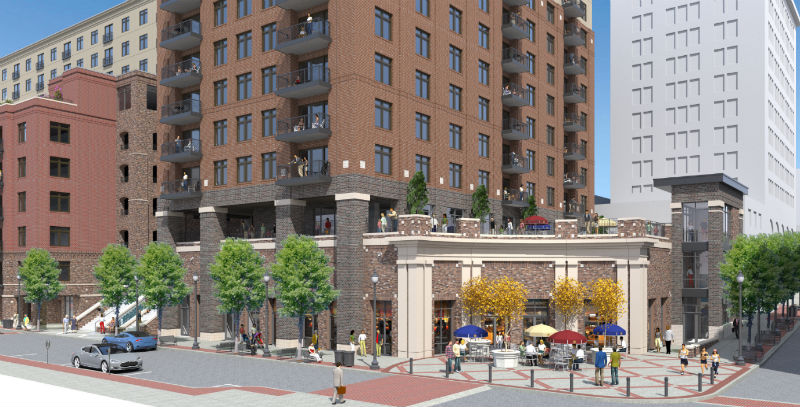 The company, Trez Forman Capital Group, completed the loan transaction for Chapel Hill-based East West Partners earlier this month. River Place, a mixed-use project under development by East West and the city of Wilmington as part of a public-private partnership, will include 92 luxury condominiums, 79 apartments and 32,000-square-feet of retail space in a 13-story structure at 200 North Water St. It will also include 403 parking spaces and is expected to be complete by 2020.

“We are pleased to finance construction of this incredible project backed by an experienced development company that has a track record of delivering quality real estate projects throughout the state,” said Brett Forman, president and CEO of Trez Forman, in a news release. “We look forward to seeing the vision for this project come to fruition.”

Forman said in an email Wednesday that strong sponsorship, the location within the city limits along the Cape Fear River and the city’s involvement in the project were all factors that made River Place appealing to the group. The loan was originated by Trez Forman's Ryan Howard.

Closing on the financing package for the construction of River Place has allowed the city of Wilmington to sell its air rights to the developer and cleared the way for vertical construction, according to a River Place news release.

While the city retains ownership of the building site, the release explained, East West Partners will have a long-term ground lease and air rights to build in the airspace above the property. Demolition on the defunct Water Street parking deck, which River Place is replacing, began toward the end of last year.

"With demolition nearly complete, East West Partners will begin excavating the site in preparation for the building’s foundation. Other work underway includes the recently completed ADA ramp to the front of the Murchison Building on Front Street, demolishing the current elevated walkway at the rear of the Murchison Building, and upgrading the project’s water, sewer and utility lines that are intrinsic to Cape Fear Public Utility Authority’s Water Street renovations," the River Place release stated.

Sales of the condos have progressed, with 52 of the 92 units under contract for a total of more than $22.7 million, Ellison said. That includes one of the four River Place penthouses, which has a price of more than $1 million. Property sales are led by Keith Beatty and the Keith Beatty Team of Wilmington-based Intracoastal Realty.

Before the deck demolition began, 38 percent of the condos were under contract.

"The deck demolition definitely helped sales," Ellison said. "And then I think once we start installing the foundations, we’ll probably see another increase in sales."