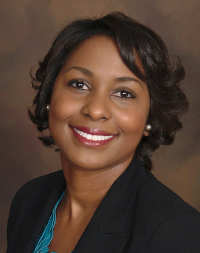 Charrise Hart will begin her new role with the YWCA on June 14, said Jenni Harris, president of the YWCA Lower Cape Fear’s Board of Directors.

Officials made the announcement Thursday night, during the YWCA's 32nd annual Women of Achievement Awards at the Wilmington Convention Center.

The search for a new executive director began in late October, six weeks after the departure of the previous director Susan Fennell, who left the YWCA after serving for about five years.

Raleigh-based executive search firm Armstrong McGuire, which focuses on nonprofits, helped the YWCA in its search for a new director. Hart was chosen out of four final candidates from the firm’s search, Harris said.

Hart comes to the Wilmington area from Greensboro, where she has served the YWCA as chief operating officer for more than two years. She has a bachelor’s degree in sociology from N.C. State University, a master's in social work from the University of North Carolina at Chapel Hill and is currently finishing up her MBA at Wake Forest University.

Hart's experience with the YWCA goes beyond her role in the organization's leadership. Hart said she was first introduced to the YWCA when her mother volunteered with the Greensboro nonprofit in 2001.

Four years later, she began an internship with the YWCA and moved on to pursue several roles with the organization before taking leadership. Hart has also worked with several nonprofit organizations in the Triangle.

“It’s unique to find someone who has the internal skills as well as the external,” Harris said about Hart’s experience. “We were thrilled to find both of those qualifications in her.”

Hart will be the first African-American woman to hold the head leadership role at YWCA Lower Cape Fear in its history.

“I am thrilled to be the new executive director of the YWCA Lower Cape Fear. The community and organization both have a very rich history, and I am very honored to lead this organization into the next phase,” Hart said. “I’m just happy to be a part of an organization that allows me to have an impact in so many ways.”

Harris said now that executive director role is fulfilled, the group is moving forward with its strategic three-year plan (2017-20) that focuses on developing programs and partnerships.

"We want to increase the capacity of our programs, teen programs for girls and mentoring personal development for girls and women," Harris said of the plan. “In the first couple of months, they have done a little bit with internal leadership they have. But now with the new CEO, we’re hoping to jump right on it.”

The YWCA Lower Cape Fear, located at 2815 S. College Road in Wilmington, is a 501(c)(3) nonprofit organization, with a mission it states as being “dedicated to eliminating racism, empowering women and promoting peace, justice, freedom and dignity for all.”