By Christina Haley O'Neal, posted Jan 11, 2021
Tweet
Negotiations are in the works for a grocery and kitchen concept in downtown Wilmington, according to a broker in the deal.

The store, called Better Basket, could come to the former Farmin' On Front location at 143 N. Front St., said Terry Espy, a broker and owner of MoMentum Companies, a Wilmington-based brokerage firm.

"We are at the finish line, and we are optimistic that we will rent this thing up and we're hopeful that we will see this open to the public in June," said Espy, who is representing the Long family, which holds the lease to the property.

The 5,145-square-foot space has been available for sublease, but negotiations are currently in the works with Joseph Allen, president and primary owner of Better Basket LLC, Espy said. 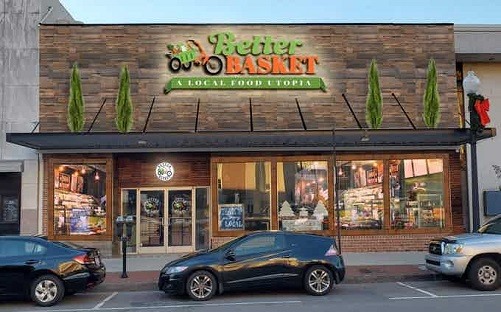 The company has already set up a Facebook page for Better Basket (rendering pictured right) business.

The former business at that location, Farmin' On Front, opened in 2016, but did not reopen after the grocery store closed as a result of Hurricane Florence in September 2018.

The Front Street space is still being leased by the Long family, Espy said.

Wayne Long, the leader and the co-founder of Farmin' and Well Care Home Health in Wilmington, died at the age of 60 in 2017.

"Ben and Zac [Wayne Long's] approached me several months ago about what could be done with the property," Espy said. "The history of this thing, this was their dad's vision. This was their dad's passion. He had tried it before down on a Market [Street] location, where Burnt Mill is. And then when he went in on this location, he spared no expense ... they did it right."

Since the store closed its doors, the Long family has been trying to find a suitable business to sublease the property, Espy said.

"There's a hole in the market ... strangely enough there's a food desert when it comes to grocery stores downtown," Espy said, adding that many other types of businesses have been eyeing the property.

But other suitors have been placed on hold, she said, while this deal is in the works.

"We all knew the best fit was another upscale grocery store, especially with the projected population growth downtown doubling within the next few years. And with River Place opening up, the timing is perfect for something like this," Espy said.

Plans are to place a kitchen in the front of the business, with some dine-in capacity, along with keeping the grocery concept, she said.

“Instead of what exactly was there, which was really … a smaller full gourmet market, their intention is to build out a commercial kitchen toward the front of the property, and [it] would be more of a demonstration kitchen,” Espy said. “So there could be cooking classes and demonstrations. It's taking what was there and … basically, the primary change would be adding that kitchen.”

Even with the current COVID-impacted market, Espy said she is confident in the Better Basket business model and concept.

"The fact that he is heavily focused on prepared meals and to-go [items], that gives us confidence that he is making great business decisions," Espy said. "Our hope is, and our goal is, to put someone in there that will be there for the next 10, 15 or 20 years, serving downtown."

Espy added, "Both parties are committed to making this happen, and this is the direction our downtown Wilmington market is going."