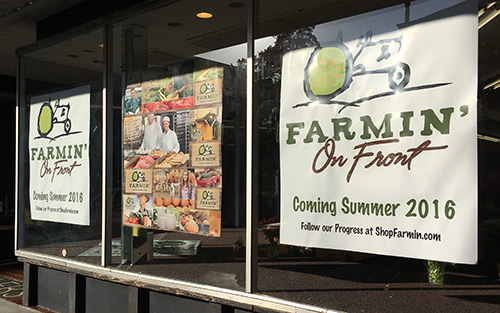 Farmin' On Front's windows before the store opened in 2016. (File photo)
After no activity for two years, the former downtown grocery space that was Farmin' On Front is available for a new tenant.

The 5,145-square-foot space at 143 N. Front St. is being offered for sub-lease by the owners of Farmin' On Front and was listed by Wilmington-based MoMentum Companies late last week, said Terry Espy, a broker and owner of the firm.

Farmin' On Front, which opened in late 2016, did not reopen following its closure as a result of Hurricane Florence in September 2018.

“They never reopened after Hurricane Florence,” said Carlton Fisher, the member manager of Fisher Holdings LLC, which owns the property. “The building is laid out and set up with equipment just like it was the day before it closed.”

“I think it’s a prime opportunity to come in and open it up as [another] grocery store operation,” Frisher said.

Since its listing last week, MoMentum Companies has already been approached about different concepts for the former grocery space, Espy said. Among them is another potential grocery store.

"If we are seeing our downtown growth double in the next two years, whoever goes into this would really have a good hold on the market," Espy said.

With all the pending residential units in downtown Wilmington, a grocery store would be a benefit, she said.

"We're finding ... the number of people moving into River Place and the apartments downtown, the last thing they want to do is hop in the car and go stand in a grocery store. It's not convenient to them," Espy said. "There is already heavy dialogue with one local. We would love to see somebody local do this."

The grocery store concept could also come at a time when the future is uncertain for some downtown eateries and businesses because of the COVID-19 pandemic.

One downtown eatery, the Stalk & Vine, has already closed in the wake of the pandemic. And as the situation draws on, more closings, including downtown retailers could come, she said.

There are a handful of businesses that could potentially close as a result of the pandemic, Espy said, adding that no other closings have yet been announced.

"The hardest part for the retailers, especially in some of the side streets, is the pedestrian count there," Espy said.

For many other downtown businesses, however, Downtown Alive, a collaborative initiative started by DBA to open up outdoor space for dining and shopping, has had an impact on increasing foot traffic and sales, Espy said.

"Where most markets are struggling and not making it, downtown Wilmington has seen the opposite," Espy said. "The participating business [in Downtown Alive] are actually profitable. Most of them have come to us and told us that they are meeting the same numbers they did last July with restricted occupancy."