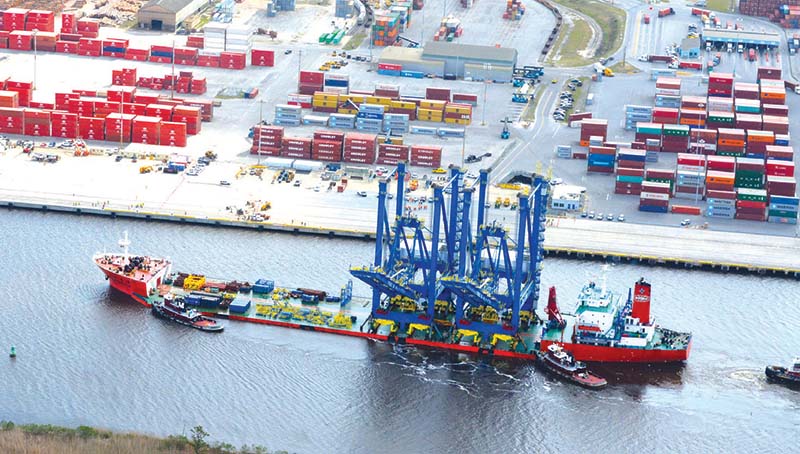 Two new neo-Panamax cranes, part of N.C. Ports’ ongoing infrastructure improvements, are shipped into the Port of Wilmington in March.
The year saw significant investments in transportation projects around the area, including at the port, airport and major roadways.

The Wilmington International Airport (ILM) started construction of its terminal expansion project in late 2018. There are three parts to the construction plan, the first of which is taking place to ILM’s TSA baggage screening area. Future contracts are planned to expand ILM’s ticket offices, lobby and baggage areas, and expand the concourse, TSA and gate areas. The first round of construction could be complete in spring 2019.

Airport officials said that the project, once complete, could support future growth by accommodating a total of about 740,000 boarding passengers at ILM a year.

That growth has been increasing at ILM this year following the addition of its newest carrier United Airlines this spring, along with additional nonstop flights to Chicago, Washington D.C. and Dallas-Ft. Worth at the airport.

At the Port of Wilmington, two new neo-Panamax cranes arrived in March, and another is on the way next year. The new cranes, along with berth improvements will allow the port to service two 14,000 TEU (20-foot equivalent unit) ships at the same time. It’s all part of a N.C. Ports $200 million capital improvement plan.

And along U.S. 421, the Cape Fear Public Utility Authority broke ground on the its $15.5 million water and sewer line project this summer. CFPUA officials said in December that the project was 46 percent complete with 35,000 feet of water and sewer lines installed. The project is on target for completion in 2019.

A temporary bridge has also been installed on U.S. 421 near the Pender-New Hanover county line, due to roadway washout during Hurricane Florence. Construction on permanent two-lane bridges is expected to start by early 2019, NCDOT said.

And work to complete cleaning and painting of another major road project, Interstate 140, continued in early 2018 for some final touches to the $200 million construction. The road, which opened in December 2017, consists of a 7-mile divided highway with 19 bridges, two of which are more than 7,000-foot-long bridges over the Cape Fear River.