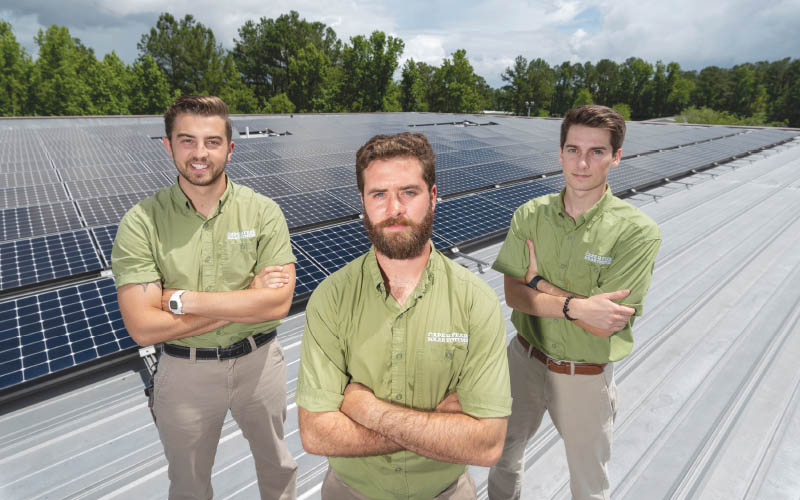 From residential and commercial to utility-scale solar operations, some in the industry say solar has become more than just an environmental trend; it’s now a more viable means of supporting the energy mix for both homeowners and businesses alike.

Decreasing solar prices, rising energy costs and greater access to lenders are some of the factors attributed to the overall growth in the solar business.

“The cost of solar installations is coming down along with the technology of individual solar panels getting better and more efficient,” said Robert Parker, Cape Fear Solar Systems’ senior project manager. “And that’s happening at the same time as utility rates are increasing.”

Cape Fear Solar Systems is a Wilmington-based solar system installation company with 21 employees. It’s had over 1,000 installations locally since the company opened 12 years ago and has plans to build a solar complex headquarters at 901 S. Front St., which would give the company the ability to hold more crews. 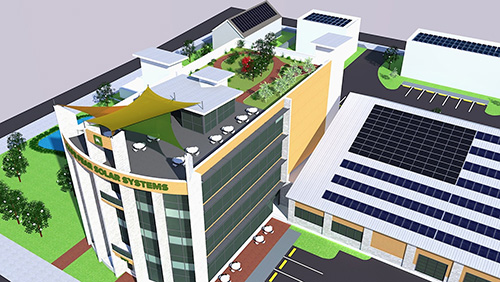 “We’ve seen steady pickup in the residential side, which has always been a big part of our business,” Parker said. “But I think we’re really starting to see a shift in that space where small- to medium-sized businesses are taking advantage of energy savings [and] tax savings, with the overall investment in solar.”

Nationally, the industry pushed the 2 million solar installation mark three years after it reached the 1 million milestone, which took 40 years to make happen, according to the Solar Energy Industries Association (SEIA).

MyEmployees CEO David Long said he has benefited from those savings with his roughly $320,000 install at company offices in Castle Hayne.

“I got more than half of that back in tax incentives … federal and state, both,” Long said, adding that the install cut his power bill in half and paid for itself in five years. Cape Fear Solar Systems did the install after Long first installed a system at this home.

North Carolina has been ranked as the No. 2 state for solar based on the amount of solar electric capacity installed through 2018, according to the SEIA.

Senate Bill 3 passed in 2007, and House Bill 589 from 2017, have each helped the state take off in solar in recent years, said Ben Kerr, a 10-year veteran of the industry and president of S2 Solar, a clean energy consulting and project development firm focused on commercial and industrial projects.

The 2007 legislation aimed to promote the development of renewable energy and energy efficiency in the state through implementation of a renewable energy portfolio standard. And HB 589, titled “Competitive Energy Solutions for NC,” established a rooftop solar rebate program and community solar program, among other measures.

Both legislative measures helped encourage a healthy energy mix in an electricity market dominated by a single provider, according to the N.C. Sustainable Energy Association (NCSEA). It also worked to lower energy costs, boost local tax bases and create jobs.

An NCSEA release in May attributed $28.2 billion in clean energy’s economic impact in the state from 2007 to 2018.

The program, which began last year, quickly reached its capacity for business and homeowners for 2019, he said. The utility also has an application waiting list for this year.

There are three years left in the program, Wheeless said. The rebate program, however, doesn’t represent all the rooftop solar installed in its service area.

In rooftop solar alone, there are more than 300 Duke Energy customers in New Hanover County, nearly 60 in Brunswick County and close to 50 in Pender, Wheeless said. In larger, utility-scale projects, Duke Energy also owns and operates 40 in the state.

Duke Progress Energy, Duke’s arm that covers much of the eastern Carolinas, was ranked by the Smart Electric Power Alliance (SEPA) as No. 4 in the U.S. for new solar capacity in 2018. It has made the SEPA’s top-10 list for the past seven years.

“I think the outlook for solar is still pretty strong in North Carolina, and we’re trying to incorporate that with the rest of our energy mix,” Wheeless said.

Another power player, Brunswick Electric Membership Corp. (BEMC) has increased its solar capacity over the years.

BEMC, a locally owned and operated not-for-profit corporation and the second-largest electric cooperative in the state, has several ways for members to get involved with solar, said BEMC CEO and general manager Josh Winslow.

The activity has picked up in the past few years with BEMC’s larger- scale projects, Winslow said.

BEMC has developed and built a solar-plus-battery storage site through a privatization contract with Military Ocean Terminal Sunny Point.

The sites work to shift power during peak electricity usage to reduce costs associated with purchasing power at those times, Winslow said.

“BEMC sees solar and renewables in general as becoming more impactful in reducing overall costs and providing value for its membership,” Winslow said.

Lending has also helped with the development of large solar projects, Kerr said, projects that come with a hefty price tag.

“Paying upfront for the next 30 years of power can be a significant capital investment, so what’s really transformed the industry in recent years is low-cost paths to ownership, meaning financing (often non-recourse) ... basically, working with lenders that understand and are comfortable with the risk and value solar and other clean energy assets present,” Kerr said.

This spring, Live Oak Bank introduced another lending program for commercial and industrial solar financing, its small business solar vertical, which is funding its first transaction this summer, he said.

The verticals at Live Oak Bank, he said, work with project developers to deliver cheaper power at a long-term fixed rate. Terms can be up to 15 years for commercial and industrial solar, and up to 25 years for utility scale.

In the utility-scale arena, it has financed over $600 million, including $8.6 million to Cypress Creek Renewables for solar-plus-battery storage project involving BEMC, Blanchard said.

Cypress Creek has also played a role in bringing more solar to the region, beyond the project with BEMC.

In total, the solar developer has 59 megawatts of solar capacity through panels installed in the tri-county area and has 111 megawatts more of solar capacity planned, said Phillip Martin, Cypress Creek’s senior community engagement manager for the Southeast.

It’s also developing and constructing a solar installation in Pender County that will power Novo Nordisk’s national operations. The project, one of the largest solar sites in the state, is anticipated to start up in 2020, Martin said. The construction is taking place on more than 600 acres.

Novo Nordisk is making a $70 million investment in the 105-megawatt solar installation, officials said. The Novo Nordisk project is creating about 900 construction-related jobs with about 150 of those jobs held by local workers.

“We’re really excited about this project … We just hope that this is a roadmap for us to do future projects like this throughout the Cape Fear region and in North Carolina,” Martin said.