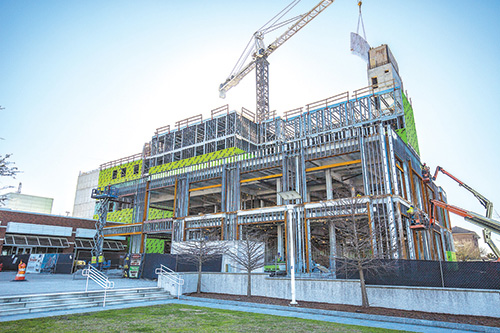 A 186-room Embassy Suites is under construction at the Wilmington Convention Center and is expected to be complete this year – one of several new downtown hotels in the works. (Photo by Chris Brehmer)
In the realm of hotel development, Wilmington is checking in to the industry’s growth.

Hotels are in the works around the region. But nowhere is the trend more evident than in what tourism officials are calling the city’s Convention Center District.

Four hotels are either under construction or planned in downtown Wilmington, one next to the Wilmington Convention Center and three others within walking distance.

The new rooms are sorely needed, officials say, to take the area to the next level.

“We’ve geared our marketing efforts for the past five years of the convention center to more state association groups, up to maybe 500 [attendees] because of the available rooms that could support that size group,” said Kim Hufham, president and CEO of the New Hanover County Tourism Development Authority.

But the convention center itself, which city officials say generated more than $3 million in revenue last year and attracted 221 events, has the potential for groups that number 750 to 1,000.

“With the addition of the new hotel inventory, we’re going to be able to market to those [larger] groups, and we’ve already seen some of those groups are planning on coming,” Hufham said.

Since 2013, more than 650 hotel rooms have either opened or are on the way, a 160 percent increase in the number of rooms downtown, according to Wilmington Downtown Inc.

A Hampton Inn under construction on Grace Street will have 92 of those rooms. It’s the farthest along of the new downtown hotels that are expected to accommodate more convention center business; a 124-room Courtyard Marriott at Grace and Second streets was completed in 2014.

While an opening date has not been finalized, the owners of the downtown Hampton Inn hope to open the hotel during this quarter or early in the second quarter, before the Wells Fargo Championship golf tournament that is expected to bring tens of thousands of visitors to the area May 1-7. Added to that will be those attending the University of North Carolina Wilmington’s graduation ceremonies May 5-6 and a convention for One Tree Hill, a TV show no longer on the air that was filmed in Wilmington, May 5-7.

“We’ve seen a big demand for this property and this location,” said TeDra George, general manager of Hampton Inn by Hilton Wilmington Downtown, its official name.

“There’s so many things going on in this community, that’s bringing in this demand for us too.”

A 100-room Hampton Inn & Suites opened in Carolina Beach in November. Another Hilton brand, an Embassy Suites under construction on the convention center property, is on schedule for a fall opening, said Brooks Johnson, director of development for Harmony Hospitality.

When it comes to Wilmington’s downtown, “there’s not much room down there, so we’ve got a prime spot there, and your convention center’s drawing and it’s going to continue to draw and continue to grow, as is the market. We think we’re going to be positioned beautifully,” Johnson said.

Too many hotels can mean too much competition for those who might be considering building one. A planned Fairfield Inn in Leland, for example, has been put on the back burner, one of the developers said recently, because of the number of rooms coming to nearby downtown Wilmington.

“We were seeing too many projects underway and decided to let demand catch up with development,” said Rajan Shamdasani, whose company just broke ground on a mini-storage facility on part of the property where the Fairfield Inn had been planned, on Westgate Drive near an existing Best Western Plus.

The developers working on the Hotel Indigo project close to the convention center have a separate 2-acre site in the area that could hold another hotel, but want to get the Indigo up and running first, said Chuck Schoninger, managing member of Port City Marina development company USA InvestCo.
The additional hotel would be planned down the road, possibly in three to five years.

“If the market seems like it needs more hotels, we’ll build it as quickly as we can,” he said.

Meanwhile, working with Atlanta- based Mayfair Partners, Schoninger’s company has submitted plans to the city of Wilmington for the Hotel Indigo in hopes of breaking ground in April, he said.

Hufham said developers typically know their markets before embarking on a hotel project.

“Developers do their due diligence on a hotel. They do their homework; they look at the occupancy rates a city is running; they look at the average daily rate and those types of things and they put it all together before they make a decision,” she said.

At times, that might mean not placing a hotel of the same brand where several already exist, or conversely, building a hotel that is the first of its brand in a market. That would be the case for The Westin, planned for a 2021 opening at 347 Military Cutoff Road, according to a listing on a Starwood Hotels & Resorts Inc. website.

“Westin is not a brand that we have here. We do have an upper-scale clientele as well as families that come,” Hufham said.

A Westin would be able to capture both.

“The Westin brand has a reputation for excellence that is renowned and will serve to enhance our existing full-service hotel offerings, especially if it offers meeting space that can accommodate larger groups,” said Connie Nelson of the Wilmington and Beaches Convention & Visitors Bureau, which is operated by the New Hanover County TDA. “The fact that the proposed hotel is conveniently located close to the beach will appeal to meeting planners and leisure travelers.”

Another Starwood brand, an Aloft Hotel, is in the works at the Coastline Conference and Event Center next to the Wilmington Convention Center on Nutt Street in downtown Wilmington.

Officials with the developer for the Aloft Hotel downtown, Poteat Hospitality, had been looking for several years in Wilmington for the perfect spot for a hotel.

With the Aloft and other hotels on the way, they see the Port City as an emerging marketplace where excitement is building, said David McLamb, executive vice president of Poteat Hospitality.

“These are private individuals that are looking at Wilmington saying, ‘This is a market I want to be a part of,’” McLamb said.