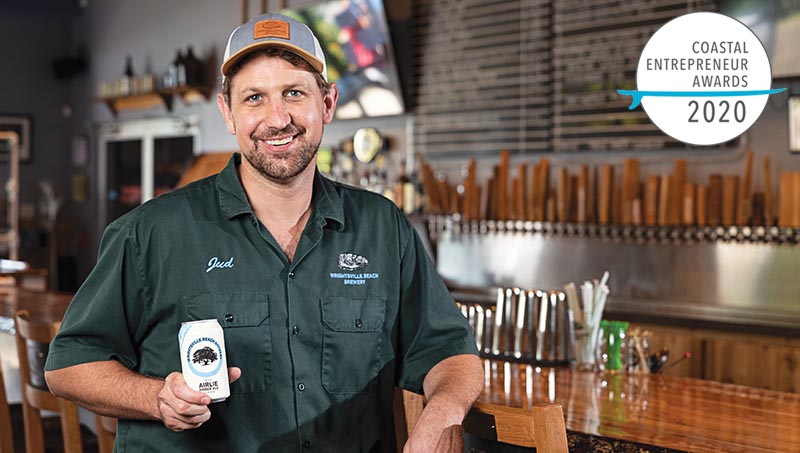 The establishment, which includes a 9,650-square-foot brewery and a beer garden at 6201 Oleander Drive in Wilmington, began coming to life with a groundbreaking in 2016, and the doors opened in January 2017.

Brewery founder and owner Jud Watkins said he hopes to open a second location in the Leland area in Brunswick County, but that’s several months down the road – probably more than a year – because of how the coronavirus pandemic has affected everyday life including construction, employment and even permitting.

He said the brewery is back up at about 80-90% of its normal volume of business after a closure and restrictions because of efforts to slow the spread of the novel coronavirus.

“We’ve had a lot of great support during the about two-month period that we were mandated to have our taproom doors closed,” Watkins said.

“We had a grocery program going; we had a drive-thru. It was interesting. We did a lot of the contact-free curbside pick-up, and it was really awesome to see people coming through the drive-thru line with [the] regularity that would normally be the customers we’d have in the taproom having a pint, having a pizza.” he said. “But they still supported us and helped us get through some hard times.”

In addition to a grocery delivery service and a drive-thru for the brewery’s customers, Wrightsville Beach Brewery also hosted a drive-thru farmers market, which has since ended, that became almost too popular because of Oleander Drive traffic concerns, Watkins said.

At the start of the slowdown caused by the pandemic, the brewery was able to retain about two-thirds of its staff while furloughing the remaining employees. The brewery has been able to rehire employees and work with others on their hours.

“We have a tremendous staff. I think that’s always worth mentioning first and foremost. We’ve just got such an awesome team here,” Watkins said. “We really pride ourselves in that and just making sure we hire friendly people first.”

For the brewery’s success, the staff probably serves the most credit, Watkins said.

“Beyond that,” he said, “it’s just being a welcoming environment that puts out a quality product both in our beer and our food. I like to think we have a pretty cool vibe inside and out in the beer garden.”

When Jud Watkins envisioned Wrightsville Beach Brewery, along with his father and grandfather, he imagined a place that customers would enjoy but that would also give back to the community.

“Our big thing is just being part of the community. … Particularly in these adverse times, we’re encouraging everybody to give back,” Watkins said. “In good times and bad times, it’s something we really value.”