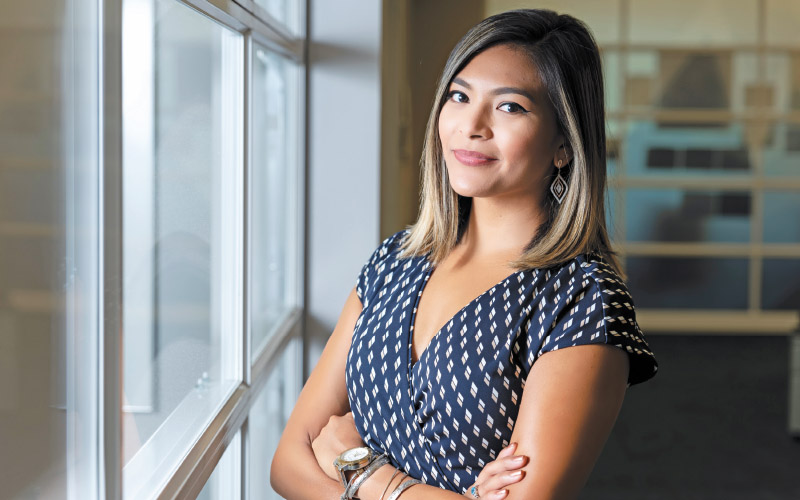 Software developer Racheal Lenig joined Cape Fear Women in Tech to both learn from other women in the field and guide others looking to pursue a career in tech. (Photo by Michael Cline Spencer)
When Racheal Lenig graduated with a bachelor’s degree in computer science from the University of North Carolina Wilmington in 2014, she noticed she was one of three women graduating in her field that day.

“At the time, there were very few women in my classes. It was probably about a handful, less than five in every class, especially as I got towards the end and I was in capstone classes,” Lenig said. “There weren’t nearly as many women, but I didn’t feel that I didn’t belong. I never felt like it was a boy’s club.”

Lenig is a software developer at Atlantic Telephone Membership Corp. (ATMC), a communications cooperative that provides phone, highspeed internet and cable TV, among other services.

She is part of a growing group of women in the state that have joined the tech field, and according to NC TECH Association, North Carolina is behind only D.C. when it comes to women in tech.

“North Carolina is the No. 1 state for percentage of women in the technology workforce with women making up 35.6% of the workforce,” stated a 2019 State of Technology report from the association.

Since 2015, there have been 137 men who have graduated with a bachelor’s degree in computer science at UNCW, compared to 29 women, according to the university. However, the number of female graduates in the field has been steadily increasing year-over-year.

As technology companies and the women who work for them grow around the state, Cape Fear women have been carving their own way into a male-dominated field, and yet, area women say more needs to be done to promote those women into leadership roles.

Lenig landed her job right after graduating college, a position that thrusted her into the tech workforce while she was a young adult. To meet others in the field and learn from them, Lenig joined Cape Fear Women in Tech, becoming a member at its first meeting in 2014.

“I am at the start of my career, and I thought that it would be a really good opportunity for me to meet other ladies that are a bit further along with theirs to get some guidance, advice and just inspiration,” she said.

The organization was formed with the goal of championing opportunities for women in technology in the region and empowering them to strive for these competitive positions, according to its website.

“I also joined Cape Fear Women in Tech to help represent minorities,” Lenig said. “I think that women in general and especially those in minorities, it’s important for us to be out there, show up and show ourselves. If you see someone else doing it, then it’s attainable. You feel represented; you see yourself in someone else.”

Another Wilmington woman who has used CFWIT as a resource is Jennifer Turnage, co-founder and CEO of myBeeHyve, a Wilmington- based startup that provides a contact management system for network marketing.

“I think that we have a really strong [women in tech] community, and I learned about that through the Cape Fear Women in Tech organization,” Turnage said. “It was one of the first groups I met when I moved to Wilmington. I have met other women that are doing some amazing things at Corning, GE, nCino and Live Oak Bank. There are a lot of women in technology here in Wilmington.”

Before starting her own webbased business, Turnage spent most of her career in the tech industry, filling CFO and manager roles at various tech companies including Librestream Technologies Inc., an augmented reality company based in Canada.

Because of her years of experience in the tech industry, Turnage said she doesn’t think of herself as unique; however, she recognizes there are not a lot of female founders of tech companies in the area.

Turnage is also a founding member of xElle Ventures, a newly formed investment organization in the state run by women that is focused on women-founded businesses.

“We will fund female founders throughout North Carolina, but I will be taking the lead for xElle in Wilmington,” she said.

When it comes to women working in tech, it is important for companies to support women, Turnage said.

“My advice to the employers in the area is to look at how you can invest in the women in your organization to help them develop so they can stay in that organization and they see that they have a career path,” she said.

A pathway for women to advance in tech fields in the state appears to be dim, according to Brooks Raiford, CEO and president of NC Tech Association.

“The real challenge is a lot of the women that go in tech as a young person don’t stay; they move to a different field,” Raiford said. “They do not drop out of the workforce for families, they just leave the field.”

The association is trying to address that issue by hosting career panels and getting input from the community. One item that might help is working with women to become tech leaders, Raiford said.

Women might choose to leave tech fields when they don’t see other women in the organization they can view as role models, Turnage said.

“Throughout my entire career and all the companies I’ve worked with, I have never worked directly for another woman. Every single direct supervisor, manager or executive that I reported to was a man,” Turnage said. “When women are in leadership positions, they need to be supported because other women are watching them as examples and really want to see them succeed. It’s not necessarily just about the individual at that point. It’s about getting back to that community.”

Representation is also important for Lenig, who was encouraged to continue pursuing computer science at UNCW thanks to the example she saw from Laurie Patterson, associate professor and previous chair of the computer science department.

“Seeing her pursue computer science and being the chair, that was inspirational,” she said.

Lenig said she hopes to encourage other women and girls to join the tech field by being a role model.

“One of my goals is to help inspire young women to pursue computer science. I think that it’s a common misconception that programmers can’t be feminine,” she said. “It’s important to show girls that you can do your makeup, you can have nice hair, you can dress however you want to dress and you can code.”