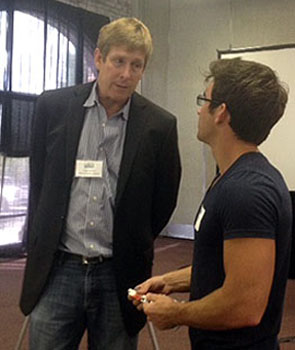 Forrest, director of South by Southwest (SXSW) Interactive, was the keynote speaker at Thursday’s Coastal Connect Entrepreneur and Capital Conference. The University of North Carolina Wilmington’s Center for Innovation and Entrepreneurship presented the conference.

Addressing a capacity crowd at the Coastline Conference and Event Center, Forrest related the rise, since the mid-1980s, of the annual festival that has helped make Austin, Texas a hub of creativity and innovation. Having been part of SXSW since its early days, Forrest cautioned conference attendees against expecting overnight success in creating such a hub in Wilmington.

“Remember, it took us 30 years,” he said. “When SXSW began, it was [in a] smaller [space] than this room now. We grew it incrementally. The biggest secret to our success is patience and persistence.”

SXSW Interactive’s attendance is now more than 30,000 people, while the overall festival, which takes place over 10 days in March, pumps about $218 million into Austin’s local economy.

“The event with the biggest economic impact is the Super Bowl, which is about $450 million, so SXSW is half of a Super Bowl,” Forrest said.

While big is good, a very large festival presents some challenges, such as substantial price hikes in food and lodging during the event, he said, adding that “everyone wants to get in on the money train.”

The bigger the event, the more difficult for attendees to make the connections that are so important for startups, Forrest acknowledged.

“The vibe has changed a lot in the last 10 years,” he said. “SXSW used to be geared to younger developers; now we’ve got mayors and senators attending. Does it bother me that Rahm Emanuel is coming to tout Chicago? Not really, because the event is about making connections, but with 30,000 people. It’s getting harder to make those connections; you can do it better in a room like this.”

Cost to attend the festival can be a barrier for younger people, Forrest said.

“For people in the tech industry, that price is not a deterrent, but we are pushing out younger startups and students, where so much innovation is coming from,” he said. “We have a couple of strategies to address that. One is we’ve partnered with several partner schools and give some scholarships to their students. We’ve also started a SXSW V2V in Las Vegas where participation is geared to startups and is cheaper to attend. The CEO of Zappos is there, investing in the city’s older downtown sector to make it a creative hub. We want to be in on that.”

“That would be a logical way for us to grow – taking our show to [other cities], doing pop-up events. It’s something we are likely to pursue in the next few years, but it’s a lot easier said than done,” he said. “We’re in Las Vegas now, but it has been harder to grow than we initially thought. Austin has such a center of creativity.”

Center for Innovation and Entrepreneurship (CIE) executive director Jim Roberts kicked off the daylong conference that included panel discussions, rocket pitches and breakout sessions on a variety of specialized entrepreneurship topics by noting the first year anniversary of the center in its current form.

“It’s also our first venture conference and the only one outside of the Triangle,” he said, referring to the CED Tech Venture Conference in Durham. “Their first one drew 100 people; we’ve got 300 people here today.”

Roberts said that attendance at Thursday’s conference had exceeded the center’s goal of 200 – even its “stretch goal” of 250.

“Today is about doors of opportunity,” he said during his opening remarks. “Please go after that opportunity; knock down that door.”

Ed Paul, head of Tozal, a young life sciences company, found the conference to be a valuable source of information and connections.

“We’ve been around the last three years, working in a vacuum,” said Paul, who developed a prescription eye vitamin to prevent and treat macular degeneration. “I was not fully aware of the life sciences community here until I connected with Jim Roberts at the CIE. In the last few months, Jim has introduced us to multiple resources, including the N.C. Biotechnology Center, which has expressed a desire to provide more funding in southeast North Carolina – a resource I didn’t even know existed.”

Paul pointed out that Roberts had just introduced him to an intellectual property law firm with expertise in the life sciences industry.

“He has also connected us with more presidents and CEOs of local business who could help us,” Paul said. “I’m making other connections today.”