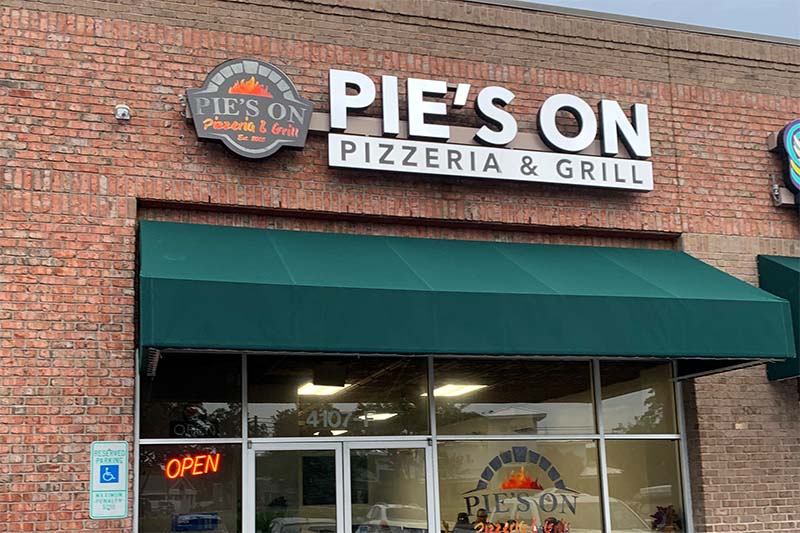 Pie's On Pizzeria & Grill recently opened at 4107 Oleander Drive in Wilmington. (Photo courtesy of Pie's On Pizzeria)
Brad Heaton has known pizza his whole life. Growing up in New York, his parents operated delis and restaurants.

After serving eight years in the U.S. Air Force, Heaton would help with his family’s restaurant in the Poconos Mountains before going to work for Otis Elevator Co. After moving to Wilmington, Heaton and his family once again felt the urge to open a restaurant but as the pandemic hit, those plans were halted. The opportunity arose again, and now, the Heatons have opened Pie's On Pizzeria & Grill on Oleander Drive.

“I admit, we are foodies,” Heaton said. “There’s just something about being in this business. It’s where people come together for meals as well as time together.”

He believes that it is even more special because it is a family-run business. Heaton’s dad is in the kitchen while his daughters work in the restaurant with customers.

Another important aspect of Pie's On is that Heaton is localizing popular dishes. “We were asked about creating a Chicago Deep Dish. While I think that’s great, I changed it and made an 18-inch Wilmington Deep Dish.”

He said he felt it was important to make a menu specialized for customers; the Wilmington Deep Dish is already a favorite item.

Hailing from New York, Heaton did elect to bring down some hometown favorites: Chicken Riggie, an upstate New York dish and Mama Mary’s Lasagna, named after Heaton’s late mother. A family favorite has been the 28-inch Monster pizza.

Heaton said he and his family are thrilled to be opening a new pizza eatery in Wilmington. At 4107 Oleander Drive, the space replaces the former Pizzeta's Pizzeria, which closed in the spring.

Heaton said he's not one to be competitive in the marketplace and adds he loves that Pie's On can add something to an already great local pizza scene.

“There’s a lot of good pizza here already. Pizzeta’s was wonderful and Slice of Life is great,” he said, adding that he feels in any business it’s good to build relationships with fellow restauranteurs.

While already open for business, Pie's On Pizzeria & Grill will hold its official grand opening on Labor Day weekend.

“Given what we have all gone through as a country and community with COVID, I’m humbled to be able to open this restaurant and serve Wilmington," he said.