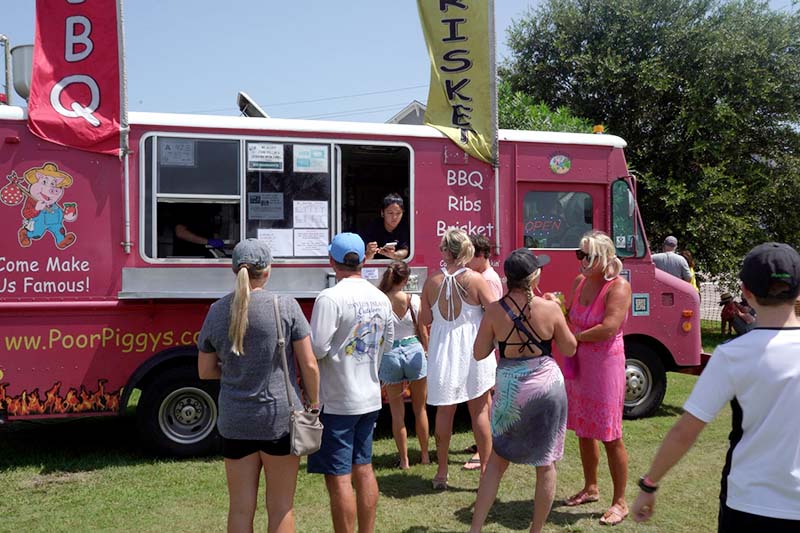 People line up for a food truck at an Island Women event held earlier this month. (Photo courtesy of Island Women)

The Island Women are bringing back the Flock of Food Trucks to Carolina Beach after a successful first event last year.

Set to take place Thursday, June 30 from 4 p.m. to 8 p.m. at Carolina Beach Lake Park, the Flock of Food Trucks will bring out food, live music, games for the family, beer and wine and more.

A nonprofit group founded in 2008, the Island Women is comprised of a diverse group “open to all women interested in enhancing the quality of life on Pleasure Island and its neighboring communities,” according to event coordinator Carey Jones.

The group initially formed as a coalition of business owners and retail employees, but later expanded to promote making Pleasure Island more environmentally friendly, ensure people with disabilities had beach access, enhance beautification and give charitable donations to nonprofits and schools and aid in disaster relief, Jones said. On Pleasure Island, the group may be best known for its flamingo flocking, when someone can order dozens of plastic flamingos to land in a yard for a special occasion – a surprise that benefits the organization's philanthropic efforts.

The “FUNdraising” event will cost $5 to enter; kids 10 and under are free. “It will be a fun night out for family and friends,” Jones said.

Flock of Food Trucks will be handicap accessible and will feature games in a large kids’ zone  for kids. Adults will have fun activities too, including cornhole and “a life-size version of our very own Pleasure Island Vacation Game,” Jones said. The game is set up similar to Monopoly but with a local twist.