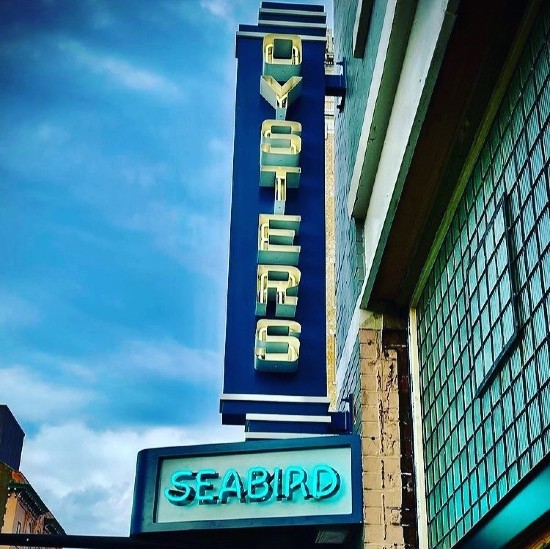 Located at the corner of Front and Market streets, Seabird began in the fall of 2019 when Neff leased the ground floor of 1 S. Front St., a building owned by developer James Goodnight, who has rehabilitated several historic structures in Wilmington and Raleigh over the past several years.

At the time, Neff told the GWBJ that the space and partnership with Goodnight “seemed like a natural fit.”

Neff left his position as executive chef and managing partner of PinPoint Restaurant in February 2019 to explore options for a new restaurant.

From the start, Neff had a wish list for the layout of the restaurant: an open kitchen, a chef’s table, a separate bar area and a private dining room. He had put together a few drawings to help launch his vision but soon realized he didn’t necessarily know how to make it all happen. 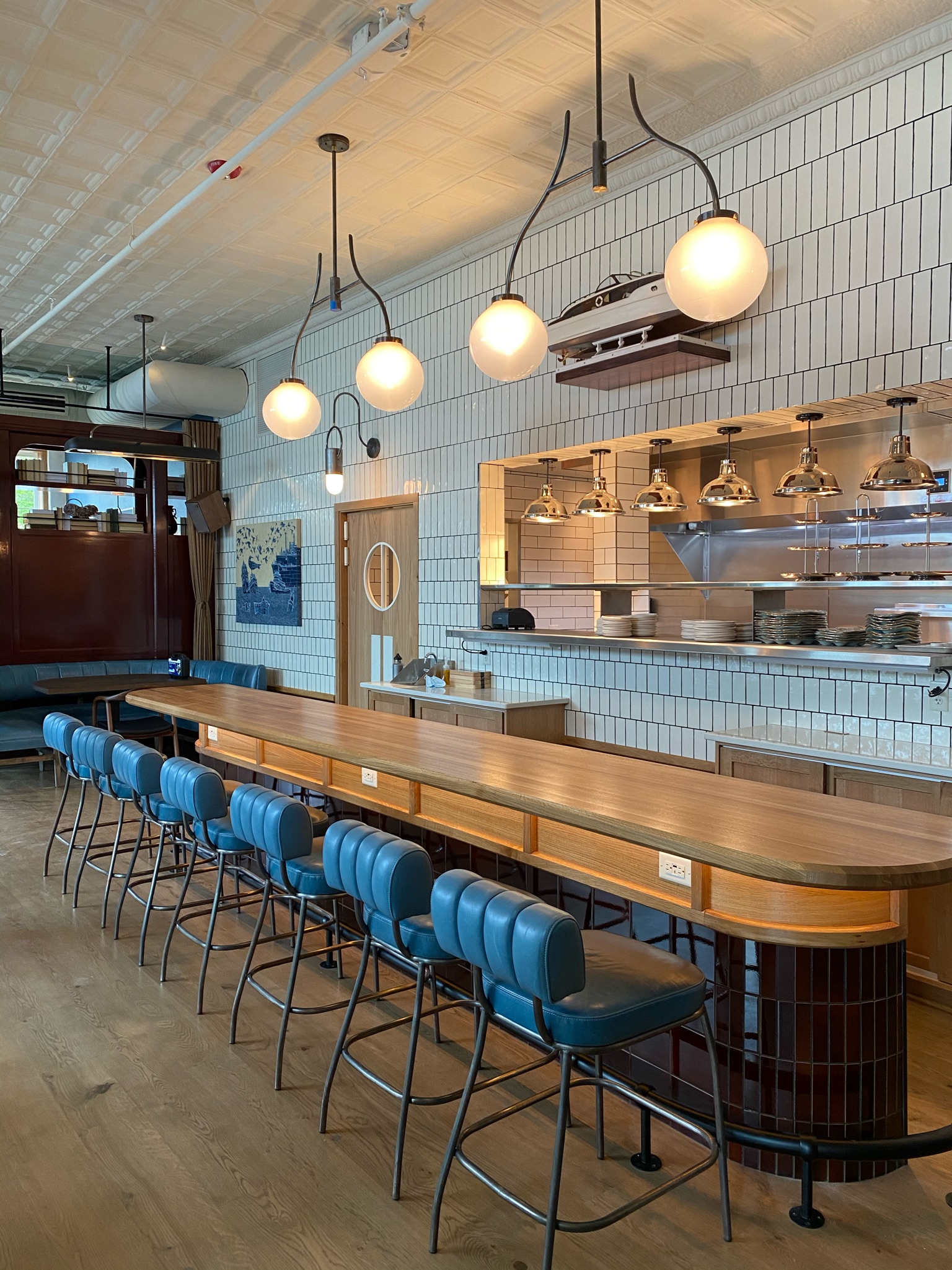 When Goodnight suggested bringing in a designer, Neff reached out to a friend who immediately suggested designer Smith Hanes of Atlanta. Fortunately, Hanes had done some residential projects in Wrightsville Beach and was familiar with the Wilmington area.

“The goal was to make sure the look and style of the restaurant made sense here on this corner in downtown Wilmington,” Neff said.

Including all of Neff’s wish list items was a tall order given just 2,600 square feet, but Hanes managed to incorporate them all, as well as a request of Neff’s partner, Lydia Clopton, who envisioned an area to display and sell a curated selection of cookbooks.

Large wooden bookshelves, separated by custom-made curtains, provide a barrier between the bar and dining room, as well as a space to display the books. A second set of bookshelves provides the border between the main dining room and the private dining space on the opposite side of the restaurant, with these shelves showcasing Neff's and Clopton’s personal cookbook collection.

The use of varying shades of wood throughout the restaurant is accented by blues and white, giving the space a calming, coastal feel that is both modern and classic. The artwork includes pieces from Wilmington and Atlanta-based artists, and a few thrift store finds to round out the mix.

Neff said working with Hanes helped him to make the most of the space, and ensured things were done right the first time around.

It’s also been Neff’s intention from the start to create a restaurant that would be open all day, not just for dinner. To start, Seabird will offer a coffee program featuring Counter Culture Coffee, eventually incorporating a small breakfast menu, followed by lunch and perhaps a late-night menu as well.

Highlighting locally sourced food has always been Neff’s focus and Seabird’s menu will primarily be an homage to seasonal seafood. He intends to keep the menu small to hone in on the bounty of each season, while still providing something for everyone.

The opening menu will offer both baked and raw North Carolina oysters, including a Stone’s Bay oyster from Neff’s friend Matt Schwab of Hold Fast Oyster Co., which will be exclusive to Seabird.

One of Neff’s personal favorites, the catfish and oyster pie, was inspired by a trip to London, where he and Clopton ate fish pie, a traditional British dish. While in London, the couple stayed at the home of close friends who reside primarily in Wilmington, and who are frequent attendees of Neff’s cooking classes. Upon his return from London, Neff began experimenting with creating his own version of fish pie, incorporating his favorite local ingredients.

“One of the things I really enjoy about cooking is finding concepts from different places or times and adjusting them according to seasonality and place,” Neff said.

Neff and his friends eventually hosted a cooking class featuring his newly created catfish and oyster pie, and it was so loved by the attendees that they insisted it must be on the menu at his new restaurant.

“I hope people love it and it becomes something we can’t take off the menu because I love it,” Neff said.

The pie combines brined oysters and catfish, cabbage or bok choy, root vegetables and onions covered with a smoked celery cream and topped with a potato crust.

“It’s super comforting and delicious,” Neff said. “And for me it’s one of those special dishes that connects people, places and ingredients.”

The bar at Seabird will offer five or six seasonal cocktails utilizing fresh ingredients, as well as classic cocktails, wine and a rotating selection of local and regional brews on tap. Neff worked with a close friend and wine importer to create a wine list that he describes as small and focused, with an answer for almost anyone’s taste in wine.

As for Clopton’s contribution to Seabird, Neff said guests will likely see her coffee cake in the mornings as well as her strawberry rose jam.

“Whatever she’s inspired to make will always be welcome,” Neff said.

Neff has relied heavily on input from Clopton as well as close friends and comrades within the industry to help develop Seabird each step of the way. The result is a restaurant that clearly speaks to his philosophy and personality.

After many months of planning and working behind the scenes, Neff said he’s delighted to finally be able to reconnect with people outside his small circle.

“This ended up being a very big job, but overall I’m grateful that that timing has worked out the way it has,” Neff said. “We’re ready and we’re hopeful for positive things for everyone in the future.”