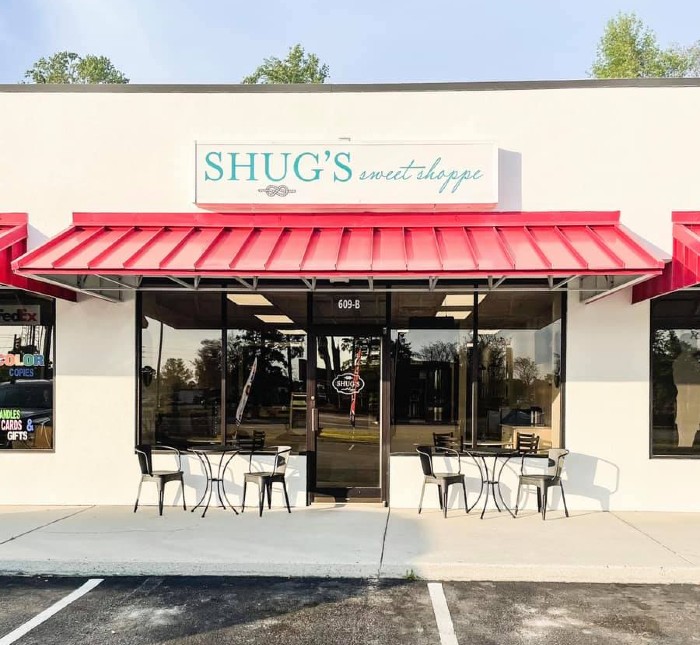 Scott and Josh Williams, the father and son owners of Cape Fear Restaurant Equipment, both have a self-described sweet tooth, leading them to their latest family venture, Shug’s Sweet Shoppe, which opened Monday in Monkey Junction.

Growing up, Scott Williams always called his sister Monica “Shug” and he wanted to honor her in the naming of the shop. Police Lt. Monica Carey of Clayton was killed in the line of duty in 2001.

Shug’s main focus will be filled croissants, a baked good that has seen a rise in popularity in recent years.

“There are several bakeries now that carry filled croissants, but Shug’s will be the first in this area of town,” Scott Williams said.

The shop will also carry cinnamon rolls, brownies, cookies, muffins and cakes, as well as sugar-free, gluten-free and Keto options.

“We wanted to make sure there was something for everyone,” said Scott’s daughter-in-law, Jenna Williams, who will run the day-to-day operations at the shop.

There will typically be about three flavors of cakes in stock, and special flavors can be ordered. Jenna Williams also said that bakers will be experimenting with new croissant flavors and they encourage customers to make suggestions. They plan to run a croissant of the month, as well as weekly and seasonal specials.

Cinnamon rolls and muffins will be baked each morning and will be available until they sell out, but croissants will be baked continuously throughout the day in order to meet demand.

“We’re very excited to be open after having a ton of interest through both foot traffic and online,” Jenna Williams said. “Now we just hope we can meet the demand and provide the level of service we strive for.”

Shug’s serves Java Estate coffee, both hot and iced, and has a few tables inside and out for customers who wish to enjoy their sweets onsite.

Shug’s Sweet Shoppe is located at 609-B Piner Road between J. Michael’s Philly Deli and Mailbox Express and is open from 6 a.m. to 6 p.m. Monday through Saturday. An official grand opening will be held Tuesday, April 27.

End of the road for Detour Deli & Cafe