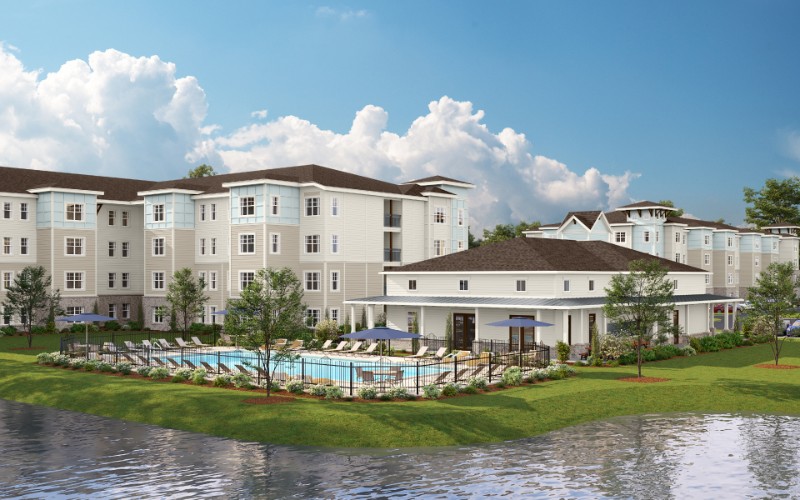 The N.C. Office of Recovery and Resilience (NCORR) announced a $9 million grant for the project, according to a press release Monday. Altogether, the city of Wilmington, New Hanover County and NCORR have contributed more than $14 million in public funding toward the $60 million project.

Starway Village, located at 2346 Carolina Beach Road, would be a 278-unit apartment complex built on the former site of the Starway Flea Market. It is slated to be affordable to households that make 60% of the area median income and will include 20 fully accessible ADA units.

In a press meeting, local and federal officials and project developers said Starway could not have been possible without the partnership they formed for the gap funding.

In July, the project cleared a major hurdle by receiving a 4% Low-Income Housing Tax Credit (LIHTC) award and a tax-free bond allocation from the N.C. Housing Finance Agency.

The 278 units come at a time when the city of Wilmington has an annual gap of 416 rental units. According to a commissioned report, between 2010 and 2020, only 396 units of affordable rental housing were produced in the city.

There is an estimated need for 10,700 additional units in the region over the next decade.

“We have a greater demand than we have supply,” Saffo said. “So that's averaging about 40 units a year when we really need to be averaging about over 400 units per year. I think everybody's looking at this thing in a partnership way, what we can do to collectively use our resources to come together to help some of these gap funding, especially on tax credit projects that you will see in the foreseeable future.”

Saffo added that there is land availability in the northern region of the county which provides opportunities for additional affordable housing developments.

Since efforts for the project began in nearly 221, developers have faced a 30% increase in construction cost and interest rates have more than doubled, said Ted Heilbron, a member of the Starway development team with Kelley Development Co.

“When your costs are going up and your cost of capital is also going up, in the nature of what we do, we're not increasing rents, right? And so, it creates holes in the funding for the project,” Heilbron said. “And that's where we originally turned to the city who stepped up, the county who stepped up and now subsequently, NCORR who most recently has stepped up to commit money to help this project happen.”

Without this public-private partnership, Starway would have never happened, Heilbron said.

“The truth of the matter is that individually, without the NCORR money, but also without the city money or the county money, this project does not work in its current form,” he said. “It would either had to have been downsized to a lower number of units, which would've been less impactful to bridging the affordable gap locally. But each of the committed public funding sources, without them, this project in its current form would not be moving forward.”

Looking ahead, Starway is slated to break ground in May with construction expected to take about 20 months and a goal of moving in families by early 2025.