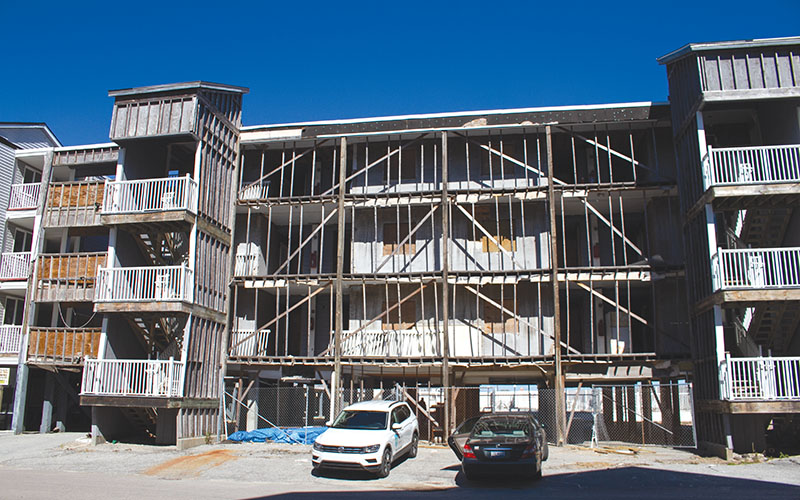 On April 7, pre-qualified bidders are slated to gather on the third-floor courtroom of the U.S. Bankruptcy Court in Raleigh for the chance to purchase the dilapidated North Pier Ocean Villas, according to an order entered by Judge David Warren on Feb. 10. Minimum bids begin at $3.95 million.

Though the court procedures have moved along without major hiccups since North Pier Ocean Villas’ Homeowners Association first filed for bankruptcy protection in August, the demise of the 42-unit timeshare condominium was not sudden. Its financial failure bubbled slowly for decades, sealed by costly damage caused by and discovered because of Hurricane Dorian in 2019.

The HOA’s president, John “Jay” Hutchings, told the court in an August hearing shortly after filing that active sales of the ’80s-era timeshare units stopped around 1997. As the years passed, owners no longer interested in using their shares – which each encompass the same week at the same unit – or who didn’t want to pay annual dues gave their deeds back to the HOA. By last year, the HOA had accumulated nearly half of all shares (divided into 52 weeks each, the HOA owned 1,042 shares of the 2,184 total).

“Each year, I’ve taken a hit because people have just walked away not paying,” Hutchings told the judge.

In interviews, several timeshare owners aired frustrations with what they perceived as a lack of upkeep in recent years as they paid rising fees. The HOA’s attorney, David Haidt, attributed the source of the tension to the lack of cash prompted by the deed-backs.

“[Timeshares] were something of a fad back in the ’80s and ’90s,” Haidt told the Business Journal.

“Now a lot of those properties are probably aging, their ownership is aging and that model probably doesn’t work as well as the condominium model” or apartments, he said.

Many inherited units were abandoned, Hutchings told the judge: “If they pass away their kids don’t want anything to do with North Pier. It’s just basically dead.”

After Hurricane Dorian, Hutchings attempted to corral timeshare owners to pass an assessment to rebuild the most damaged building to no avail.

The association’s insurance payout arrived five months after damage had occurred and as the first phase sat exposed, its condition worsened, Hutchings told the court.

A condemnation notice for the first phase is currently pending from the town of Carolina Beach, according to town officials. One of the North Pier Ocean Villas’ buildings is gutted, while the other is still being used.

Bankruptcies are not common among legacy timeshares, Gamel said, but these older properties and timeshare models are mostly to blame for the sometimes-negative reputation the arrangements have attracted.

Since the initial burst of timeshare activity, the industry has evolved, taking strides to consolidate, come up with cleaner buyback options and provide owners with a buffet of alternative experiences through a point system as opposed to sticking to one particular unit.

“The flexibility started to give you more product. And that’s really grown in popularity and brought a number of larger developers into play,” Gamel said, referencing the latest development wave that began in the 2000s. “The flexibility has become a huge part of why people either buy a timeshare or use it.”

Maintenance fees through the latest models are more stable, and with many resorts belonging to larger conglomerations, less risk is involved with any one property prompted by repair or upkeep needs, Gamel said.

A majority of timeshare resorts that responded to ARDA’s latest industry survey are past the active sales phase, according to the group’s 2021 study. Across the U.S., there are about 205,490 physical timeshare units among 1,570 resorts. Pre-pandemic, the industry had been gaining sales volume each year, peaking at $10.5 billion in 2019, according to the report.

Gamel, who was aware of the basics of the North Pier bankruptcy but not intimately familiar with the case, said it’s important to question whether the financial failure is the result of the timeshare structure itself or if it’s the function of the particular property.

Even in condominium associations where units are owned by just one party, a “death spiral” can happen, he said. In these cases, “too many people stop paying their maintenance fees,” and there’s no rental program or alternative way to bring in revenue, he said.

“Then all of a sudden … before you know it, you don’t have enough money for all those repairs and reserves,” he said.

Associations with shared ownership have legal declarations that include rules that govern when and how major changes or assessments can be administered, which require a certain percentage of ownership approval before action is taken. In the case of North Pier, the HOA’s legal team is filing 36 adversarial proceedings naming roughly 275 separate parties to obtain a clean title to auction the property, representing the individuals that didn’t respond or declined to consent to the bankruptcy, according to Haidt.

When Hutchings attempted to arrange a sale of phase one prior to the bankruptcy, all but one woman who owned two weeks agreed. Her objection caused the deal to fall apart, Hutchings told the judge. “The whole sale was gone,” he said. “We couldn’t do a thing.”

The higher the approval threshold percentage is, the more difficult it is for an association to take action, Gamel explained. In North Carolina, ARDA recently lobbied for the 2021 rewrite of the N.C. Real Estate Commission’s timeshare law that, according to Gamel, modernizes rules and provides new protections for timeshare owners.